What News Circulated And Was Refuted Between October 1-15 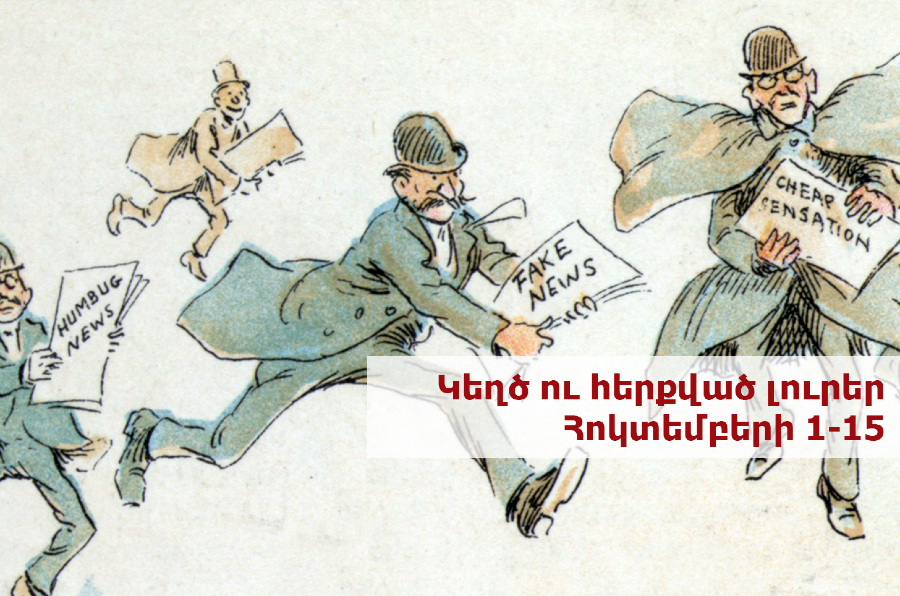 In early October, Facebook was full of fake photos from Syria, false media reports on the resignation of the Defense Minister and untrue information on the Artsakh conflict.

A number of fake photos have been circulated on Facebook about Turkey’s military operations in Syria.

Media.am found that one of the most popular ones was taken in 1975 during the Green March organized to liberate the southern regions of Morocco from Spanish colonialism.

In some publications, this picture was accompanied by allegations that the Kurds participated in the massacre during the Armenian Genocide. The fake picture was posted by the admin of the Facebook group “Armenians,” which has 46,000 followers.

The issue of Syrian Kurds has also become a topic of speculation in the media. For example, Pan.am posted a survey on Facebook about accepting Kurdish refugees. The media did not mention that this issue was not on the agenda of the government and other state agencies.

On October 14, Anna Hakobyan wrote on her Facebook page that the media spread false information that she was on a government flight to Switzerland while she was traveling on a regular economy class flight. Hakobyan also mentioned that she had joked about it with Catholicos Garegin II, who, prior to their conversation, believed that months earlier the first lady of Armenia had been on the same plane with Mehriban Aliyeva, which was also false.

There is an article about Hakobyan’s departure by governmental plane to Switzerland on the website for Hraparak daily. The newspaper cites the website Live24.am’s  “reliable sources.”

As of October 14, there is no news on this topic on Live24.am. What’s more, Live24.am is a mushroom site, so it’s not a real media outlet.

Controversial statements were made about the “1000 Drams” Fund

For several weeks, Media.am has been trying to check officials’ contradictory data on the 1,000 Drams Fund.

MP Tigran Urikhanyan asked the Prime Minister where the 1,000 drams of the newly registered 60,000 employees are.

The prime minister insisted that fund transfers increased by 347.8 million drams, while the fund’s director said the increase was about three times less.

By sending a few inquiries to the SRC, the Office of the Prime Minister, the Ministry of Finance and the National Statistical Service, Media.am was only able to find out the answer to Tigran Urikhanyan’s question. The reason for the contradictory statements by the Prime Minister and the Director of the “1000 Drams” fund was not clarified.

No complications were reported after the vaccination

False information about vaccinations was once again circulated in the media in early October.

Shamshyan.com wrote that after getting vaccinations, a 9-month-old baby was hospitalized in critical condition. The article had about 113,000 views, but the information was untrue. He had a severe septic inflammatory condition that was unrelated to the vaccine.

The link to the vaccination was a family assumption that was not checked by the media. The Ministry of Health and Arabkir Medical Center denied the information.

Vaccinations are an effective way to protect against dangerous infections. Information about their connection to autism and other complications is a conspiracy theory and is untrue.

The Information Review Center touched upon the Armenian translation of an article published in the Russian “Nezavisimaya Gazeta” periodical on the handover of 5 regions of Artsakh for $5 billion.

The translation was published by Antifake.am, which is presented as a fact-checking platform.

The article was translated selectively. For example, parts on the corruption related to Mikayel Minasyan and Serzh Sargsyan’s Armenia “passing” on to US influence were not translated.

Davit Tonoyan did not resign

Zhoghovurd daily wrote that Defense Minister Davit Tonoyan will resign. Although the news was denied, many media outlets published headlines about Tonoyan’s resignation.

For example, the article on SputnikArmenia’s website, “Has David Tonoyan been fired? Response from the president, DM and Pashinyan” reads that the news was denied by the spokesman and the Prime Minister, but it was not clear from either the headline or the subheading.

In November 2015, Analitik.am published a false report that North Korea had threatened to “use nuclear weapons and destroy Turkey.”

In October 2019, Turkey launched a military operation in Syria, and this news, under the same headline, was published on Slim.am. The text was unchanged but was supplemented by a translation of the US President’s statement.

The fake news was also spread on mushroom websites.

The “Fact-Checking Platform” referred to the statements of former Secretary of the Artsakh Republic Security Council Vitaly Balasanyan.

In an interview published in the 168 Zham daily, Balasanyan made a number of untrue allegations about Pashinyan’s overthrow of the constitutional order, meeting with Congressman Adam Schiff and other topics.

Manipulations about the meeting between Nikol Pashinyan and Bako Sahakyan spread

The October 15 meeting of the leaders of Armenia and Artsakh was followed by conspiracy theories. Editor of 7or.am website Argnaz Manukyan and Former Deputy Director of Public Radio Lika Tumanyan made manipulative statements about the absence of the Artsakh flag and Pashinyan calling Sahakyan the “governor” of Artsakh.

The presence of the Artsakh flag, however, was not prescribed by the protocol. The flag was also missing during meetings with Karen Karapetyan and Serzh Sargsyan in the same format with the Artsakh President.

In the video of the meeting, the word “governor” could not be heard. The sound quality was poor, and one could only make assumptions about what the Prime Minister was saying.