What News Circulated And Was Refuted Between September 15-30 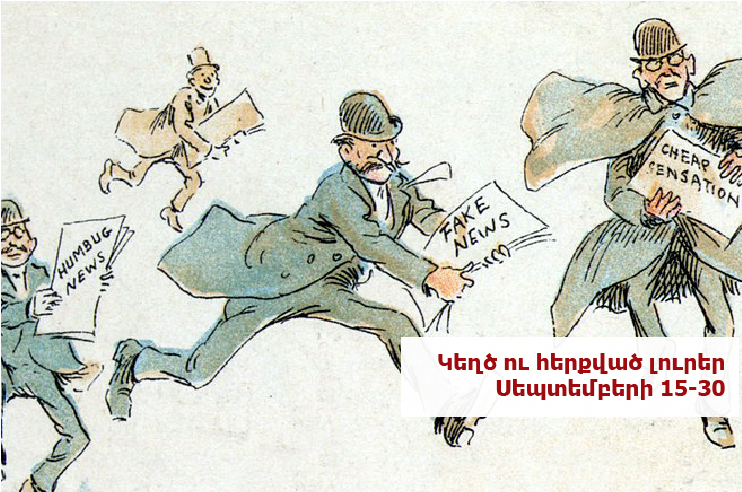 In the second half of September, the leaders of the two forces were replaced: NSS chief Arthur Vanetsyan resigned and police chief Valeriy Osipyan was fired. Another former police chief committed suicide. A number of indictments were filed, including against former Defense Minister Vigen Sargsyan. Prime Minister Pashinyan held a news conference in Vanadzor, left for the United States a few days later, and Kocharyan remained in custody. On these occasions, false and manipulative news and commentary were circulated.

Los Angeles rally and the number of protesters

On September 21, Prime Minister Pashinyan left Gyumri for a six-day working visit to the United States. The main occasion of the official visit was the UN General Assembly. However, before arriving in New York, the delegation was in Los Angeles, where the Prime Minister held a press conference and held a rally on the same day, September 22.

Mihran Hakobyan, co-owner of the Tert.am website, wrote on the same site that “one million Armenians live in California.” 168.am also makes a similar statement. These numbers were published to indicate the scarcity of the rally.

Fip.am found out that the published figures are untrue. This was based on the US Census Bureau 2017 figures about Armenian-Americans, with nearly half a million Armenians living in the United States (485,970). According to unofficial statistics, the number of Armenians is slightly higher, but in no case more than one million.

According to the Los Angeles Daily News, about 10,000 people attended the rally. And in terms of “scarcity,” the fact-checking platform, for comparison, notes that 12,000 to 16,000 people participated in the rallies of US presidential candidate Bernie Sanders, which the US media described as major.

Another speculation about the US visit was a photo of Pashinyan and Anna Hakobyan with the Trumps. This was called into question, not by real people, but by a photo taken with wax statues of the Trumps. For example, Zakar Khojabaghyan‘s Facebook user in his post compared the photos of the RA Prime Minister and leaders of several other countries and found a similarity of positions, suggesting that Pashinyan and his wife were photographed not with real people but with their wax statues. The funny thing is that sites like lurer.com, yerkir.am, reproduce each other’s content, not paying attention that the active link leads not to Zakar Khojabaghyan, but to Gevorg Emin-Teryan’s page, where there is no such content.

On September 24, the body of former police chief Hayk Harutyunyan was found in his summer house in Bjni. The preliminary hypothesis is suicide. Hayeli.am and armlur.am wrote that the suicide was due to pressure, forcing him to give false testimony against Robert Kocharyan, who is accused in the March 1 case.

Media.am reports that hayeli.am published the first report on the death of the former police chief. Referring to their sources, they quoted his last words. Hours after the publication of this article, hayeli.am again covered the topic, this time referring to armlur.am, writing that Harutyunyan was not alone in his home and again quoting his last words.

Although this information was officially denied by the Investigative Committee, classifying hayeli.am’s material as misinformation, this official message was not as popular on social networks as the websites that linked to their own sources.

Hours after this clarification, the Investigative Committee sent a letter to the editors of hayeli.am and armlur.am to interrogate them for clarification. What followed was another armlur.am publication where the editorial office claimed that there would be no disclosure of the source of information. As for the legal grounds for not disclosing the source, the Law on Mass Media was cited.

However, days later, the editor of the Zhoghovurd daily Knar Manukyan on the Public Television platform confessed that Hayk Harutyunyan was the source, and the author of the article was herself. It also turned out that this announcement made before his death and not immediately but for an indefinite time beforehand.

The Fact-Checking Center denied that Pashinyan had avoided military service due to mental problems. A document was circulated about the Prime Minister’s health, which was sent to the prosecutor’s office of the city of Krasnodar in 2001 by a psychiatric hospital in the same city.

According to infocheck.am, it is false and has nothing to do with Nikol Pashinyan. To prove the truth, the author of the article draws attention to the photo. “The forged document used the photo taken from the inspection brochure.” And in 1991, the Prime Minister published his checkbook in 2018 on his Facebook page.

The platform also reminds us of the circulation of other similar false documents. For example, in August 2018, the rumor that Pashinyan was an agent of the National Security Service was denied. A false letter attributed to Pashinyan this year about his willingness to hand over Artsakh to NATO Secretary-General Jens Stoltenberg was circulated.

An inappropriate event for the conservatory

The site disseminated information that “a closed party was held at the conservatory, which according to witnesses included members of the LGBT community and members of a satanic sect.” And, citing their source, they say that “the feast was held under the patronage of Conservatory rector Sona Hovhannisyan, who provided the building to the participants of the party all night long.” Moreover, it is said that the Conservatory has recently attempted to preach to LGBT people towards some satanic groups.

The Conservatory’s denial statement says Rector Sona Hovhannisyan sees deliberate behavior in it aimed at discrediting her. It is also noted that the facts presented are distorted: describing the use of the terms “satanic” or “LGBT” as not reflecting reality.

Yes, the YSC basement area was provided with Rector Hovhannisyan’s verbal consent given the experience of the Ad Libitum Student-Cultural Initiative events, but the September 14 event was prematurely suspended because of the inappropriate conduct of some participants that did not reflect the YSC spirit.