Wiretapping Was An Example, Not A Suggestion 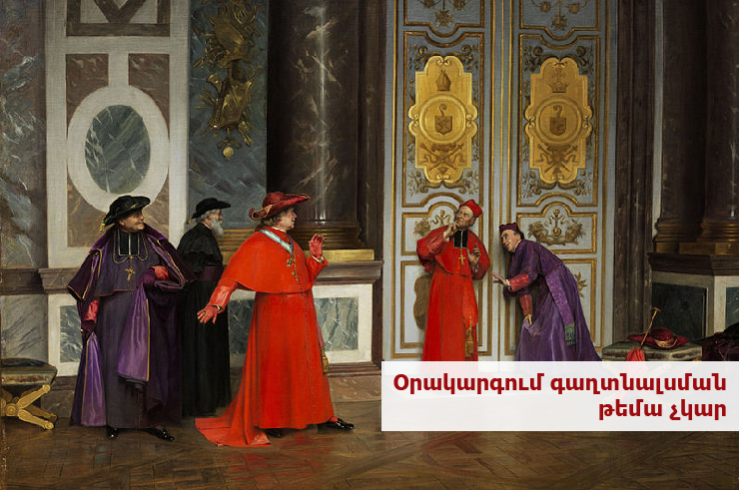 At the government’s September 12 meeting, the proposal to amend the law on banking secrecy was discussed (starting at 35:40 minutes) for about half an hour. As an example, the Hraparak newspaper misunderstood the case in an analytical article. Let’s find out what the problem is.

What does this change imply?

The Ministry of Justice proposes to make additions to the RA Criminal Procedure Code and the Law on Bank Secrecy.

The rationale is mainly that the current law impedes the effectiveness of the fight against corruption.

Deputy Spokesman Rafik Grigoryan explains that if right now, you can only access the suspect’s or the accused’s bank data, then this project proposes to create an opportunity to obtain secret bank information without subjective restrictions. At the same time, the draft offers additional guarantees and limitations.

Another justification for the change is that the current law has been criticized by international organizations, “The subjective restriction has been criticized by the Organization for Economic Cooperation and Development. Monitoring of the “Istanbul Anti-Corruption Reforms in Armenia” Program 3rd, 2014 and 4th, 2018 reports indicate a disproportionate restriction on access to banking data and have proposed to get rid of it, ”says Deputy Minister Grigoryan.

According to the Prime Minister, this initiative is being implemented within the framework of their anti-corruption activities and is based on their political conclusions: they will either fight or not fight corruption, as only partially fighting is unacceptable.

How did the subject of wiretapping arise?

In essence, there was no issue regarding wiretapping in the Code of Criminal Procedure or the law. There wasn’t even a mention of it in the Deputy Minister of Health’s report. It came later, in response to the Deputy Prime Minister’s concerns.

Deputy Prime Minister Mher Grigoryan raised several questions during the discussion and expressed his concerns. One of his observations was that if the information of a bank transfer was obtained for suspicious parties, this should not mean that information about the other party could also be obtained automatically. And to sum up, he says, “This is the most delicate and dangerous question.”

RA Prosecutor General Arthur Davtyan responds to this, in order to better understand the situation along with the wiretapping. He explains that if there is permission to wiretap and listen to “A”, they will also hear “B” talking to him. The purpose of the example was to show that the same logic, according to the suggestion, would apply to bank secrecy. That is to say, law enforcement agencies will be exposed to A’s transactions with B.

However, according to the draft amendments, all five conditions set forth by law must be met at the same time to obtain additional information on second-party banking data.

The parallel brought forth by the Prosecutor General was also about investigative searches, but the wiretap received a greater response and continued to be used during the discussion, by the Prime Minister as well as.

What did Hraparak Daily do?

The article titled “Government Legitimizes Illegal Interception and Endangers Bank Secrecy” published in the September 13 issue of the Hraparak Daily first reminds readers of Nikol Pashinyan’s statement made on September 11, 2018, that the third president’s brother Sashik Sargsyan had only $ 30 million in one bank. The author also reminds that the CB Chairman Javadyan tried to find out where the Prime Minister found this bank secret information but did not receive any “articulate response.”

“After that, the government has been wanting for a year to come up with a law, so as not to ask Javadyan to give anyone’s bank information “under the table,” but to do so by law. And they found a solution,” Hraparak writes.

Following his concerns about the proposed changes, the author stresses that the most dangerous part of the draft, in his opinion, is “anyone they want can be wiretapped, even if the person has no criminal status. Tomorrow, law enforcement officials can wiretap anyone under the name of revealing corruption.”

There is no such thing in the draft: this is a false and misleading conclusion, as the bill does not include anything about wiretapping. As we have already mentioned, wiretapping was only discussed at the Government’s discussion of the project, as an example to better understand the situation.

And the continuation of the article is more detached from reality, since the topic of wiretapping was not, in essence, a matter for discussion. “The draft was discussed heatedly yesterday, some officials voiced their objections or remarks about wiretapping, and some, on the contrary, championed the Prime Minister’s view.”

Mher Grigoryan simply made an observation regarding wiretapping, but it has nothing to do with the proposed amendment.

What does this mean?

Although the subject of wiretapping was used to make a parallel example to explain the situation and gain a better understanding of the problematic issue, Hraparak has manipulated it as a suggestion and a reality.

This portion of the discussion was emphasized by several other media outlets, even making it a headline.

The proposal was criticized by some experts as well as the Union of Banks of Armenia. The Central Bank has responded to concerns about the project in the media and social networks.

As a result of the discussion, the government has approved the draft and it will soon be submitted to the National Assembly.