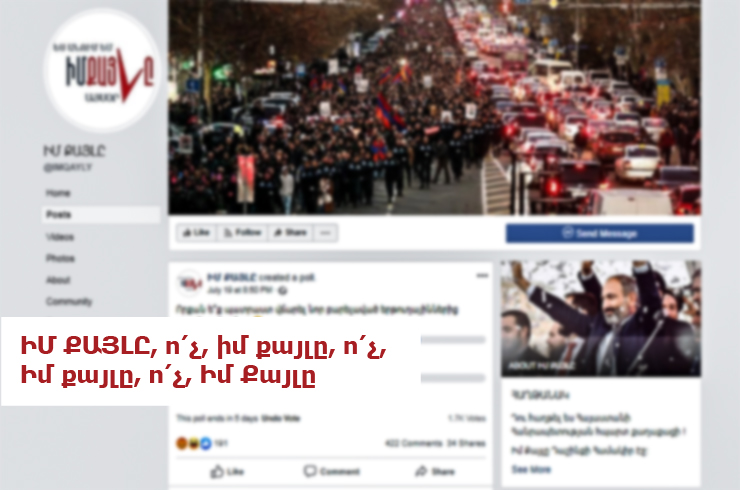 The news that there was a poll placed on the Facebook page of My Step alliance linked to the possible increase in the price of public transport in Yerevan is not entirely true. It has been said that there is a poll on the page, but the page is not official.

The source of the news

The Facebook page named “MY STEP” has been conducting a survey since July 19 regarding the rise in public transport prices in Yerevan.

In response to the question “how much you are willing to pay for the new improved routes” there are two options: 150 AMD and 200 AMD and more.

At the time of writing this article (16:00, 21 July 2019), about 1700 users took part, 78% of which supported the version of 150 AMD. The post has 191 responses and 422 surveys, in which users remind Mayor Hayk Maruti that he personally had struggled against the rise in the price of transport.

The users weren’t only reminding the Mayor about this. The unofficial page’s bait has also been swallowed by several media outlets.

On July 20, hraparak.am wrote about the poll: “According to the poll, more than 80% is for 150 drams.” The author of the material also addresses the comments under the poll. “Today users are reminding the Mayor Hayk Maruti that there was a time when he fought against the increased transport prices, and a number of users have mentioned that they want to pay 100 drams for the new minibusses.

The news was completely reprinted by slaq.am and  imedia.am, without reference to the author’s website.

On the day before on the same page, on the poll which began on July 18, panorama.am touched upon “the “My Step” page, which is actively spreading official posts, news and information about Prime Minister Nikol Pashinyan, Mayor of Yerevan Hayk Marutyan, and sometimes Chief of Police Valery Osipyan, and has recently been making inquiries about the improvement of public transport and its price increase among users. Apparently, the mood of the public is checked. And those who intend to raise them are not encouraging, they are awakening.”

This news was republished by top-news.am.

Former deputy director of Public Radio, member of Quartet Media team and member of Adecov party initiative group, Lika Tumanyan also writes about the news. In the commentary, user Harout Ghukasyan wrote that it is not worth writing a “serious comment” on the post of a fake page, for which the author of the post answered “A very convenient trick is applied. Let’s do a poll, spread it on a Facebook page, if there’s a bad response, we’ll say it’s fake, if there’s a good response, we’ll say see what great results the survey has. At the same time, people will be ashamed, and say what? It’s a fake page, what are you spreading…”

It also raises the question of how it can be proved that it is a fake page, moreover, they say that the real page should be verified and have a distinctive blue sign.

Two days later, on July 21, Lilit Minasyan, Deputy Chief of Staff of the National Assembly, wrote on her Facebook page about the page presenting itself on behalf of the “My Step” bloc.

“We have been trying to negotiate with the user of the page since September, so that the page title will change or at least add to non-official information, but Arman Hambardzumyan (the page admin) did not agree with any of the options and continues to periodically form an improper public opinion, publishing suspicious polls on the page, non-agenda issues, fake news which of course are used by several media outlets and fake lovers. “

How to tell the fake and official pages apart

Take the two pages using the name my step as an example of how to distinguish the official “My Step” and unofficial “MY STEP” on Facebook.

1. The verified sign on social networks makes it easy and quick to understand when we are dealing with the official page of any person, company or media representative. In this case, it becomes a bit complicated as both pages do not have the blue distinctive sign.

3. The number of followers on the page can be a hint. In this case, there is a great difference between the two pages. The official “My Step” page has around 37,000 followers and the unofficial “MY STEP” page has a little over 16,000 followers.

4. The transparency of the page. The Facebook About section will tell you a lot.

then there is a probability that the page is not official.

In this case, the “MY STEP” page, when compared to the other, does not have any contact information, and in the Story section it is noted that “The My Step Alliance’s Compatible Page”.

5. The content created and disseminated also needs to be considered, to understand how active it is, and how much the content is trustworthy. In the case of the “MY STEP” page, the content is quite spotty – here you can find a photo of the day, social advertising campaign, black humor, etc. We cannot say the same about the other page, which is completely official information about the alliance.