What News Circulated And Was Refuted Between July 1-15 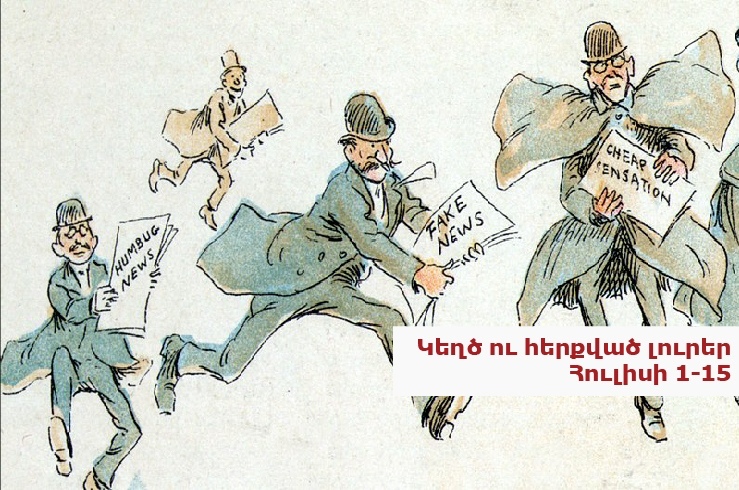 Fake and refuted news in the first half of July include the ECHR’s “exceptional” decision, the fake letter written in the name of Pashinyan, the fast-dropping but not fallen elevator…The much-discussed topic of the possible causes and solutions of Lake Sevan’s algae growth, however, there are no clear denials or confirmations on this issue.

The exception is an exaggeration

The website Analitik.am published a piece of news on July 15 that “the European Court has made an exceptional decision regarding Manvel Grigoryan.” The site qualified the decision as “exceptional” based on the official words of Human Rights Defender, Arman Tatoyan. “No matter what the person is charged with, if the penal institution does not have the necessary conditions, they should not be moved. That initiative was not right. That is why the ECHR has interfered with Article 39 of Armenia, which is done in exceptional circumstances.”

The ECHR also made a decision on the case of Samvel Mayrapetyan, a few months ago, on Armenia on January 17, which was also qualified as exceptional.

Such a decision is made by the ECHR in accordance with Rule 39 of the Rules of Procedure when there are immediate risks of irreversible damage. Media.am touched upon the previous case and found that 579 applications were submitted to the ECHR from Armenia for an interim measure in 2016-2018, of which 5 were satisfied. It is worth noting that it’s not the decision to take an interim measure on Grigoryan that is exceptional, but that such decisions are made in exceptional cases.

The actor did not die

The news which spread on July 14 claiming that Rudolf Ghevondyan had passed away, turned out to be fake.

Media.am wrote that the news of the actor’s death, accompanied by Ghevondyan’s biographical information, had been circulated by Aysor.am, Tert.am, Yerkir Media, Asekose.am and many other websites.

But later, members of Ghevondyan’s family and the Gabriel Sundukyan National Academic Theater denied the news. The news stories were followed up with a publication of additional information or denial, quoting Ghevondyan’s son’s post, “My father is still alive. Please do not share incorrect information. He is seriously ill, in a coma, and is struggling for his life.”

A fake letter from Pashinyan to NATO

Media researcher, Samvel Martirosyan wrote on his Facebook page on July 3 about a fake letter to NATO leadership from the name of Prime Minister Pashinyan, which is being spread on social networks.

The contents of the English-language letter are summarized as follows, “Whether or not we want to have closer ties with NATO, we understand that Artsakh is an issue, so within a year we will withdraw our troops from there.”

Although he doesn’t know who authored and distributed the fake letter, he later published his podcast where he said that he sees Russian traces here.

1. It was fake that an Azerbaijani film was shown on July 11 within the framework of the 16th Golden Apricot International Film Festival.

The center for information wrote that the film was not filmed using any state funding, it is apolitical, only the village where the shootings took place was in Azerbaijan. The organizers of the festival informed that the film Molokans was entirely devoted to the national minority of the Molokans, the film director is SaglaraTurbeyeva, a Russian citizen.

2. Yerevan City Hall denied that there was an elevator crash in Davtashen. “According to preliminary information, the elevator did not fall from the third floor, it descended a little faster than usual to the first floor,” Hakob Karapetyan, spokesman for Yerevan City Hall, wrote on his Facebook page. The probable cause of the accident was the fluctuation of the power, moreover, the speaker informed that according to the information received from the Ministry of Emergency Situations, the elevator has no technical problems.

3. Anna Hakobyan’s spokesperson Hasmik Harutyunyan denied the news on 168.am on July 3, whereby “Anna Hakobyan refused to help an injured soldier of the April war.” The spokesperson said that on June 14, Hayk Sekhilyan wrote a message to Anna Hakobyan’s Facebook page, then the speaker contacted Hayk Sekhilyan, in order to find out about his health and treatment options. “We have already contacted a number of organizations, medical centers, have presented Sekhilyan’s health condition and have tried to find any support option. We are still continuing our efforts in helping Hayk Sekhilyan,” reads the statement.