What News Circulated And Was Refuted Between May 15-30 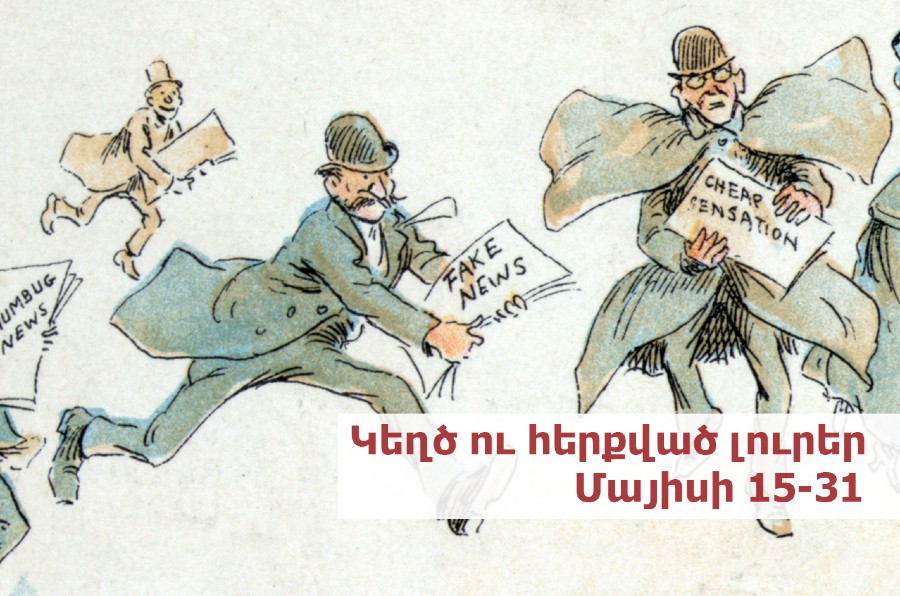 `In the second half of May, along with manipulative materials from various sources, false news was voiced by both the government and the opposition.

On May 17, political advertising spread across the Armenian part of Facebook, from the name of Peruvian musician, Franco Cáceres – Cusco Rock. the members of Digital Granat initiative promised to “clean the internet from Sorosian grant-eaters.”

Media.am found out that Digital Granate had hacked the Peruvian musician’s page and stole from it to distribute political advertising in Armenia.

Previously, members of Digital Granate managed to block the facebook page of Lara Aharonyan, a civic activist and head of the Women’s Resource Center NGO. Aharonyan’s page was later restored, and Digital Granate was blocked by Facebook. On May 20, the initiative opened a new page, which is still available on Facebook.

The broken glass of the Court became material for misinformation

Responding to the call of Prime Minister Nikol Pashinyan, on May 20, citizens closed the doors of the courts. During the protest, former NKR Human Rights Defender Ruben Melikyan posted on his Facebook page, saying that “the mixed crowd has already broken windows, pulling at the judges who had come to work.”

Melikyan’s information was denied by the Public Relations Coordinator Vahakn Alexanyan. According to him, the double ply glass was broken from the inside and it had nothing to do with the participants of the protest.

Lilit Makunts, head of the “My Step” faction also published a denial shortly after, noting that the glass was broken from the inside, probably from being closed too hard. “The pictures which are being published by different sources do not correspond to reality,” said Makunts.

Speculations on the international response

Another piece of misinformation spread during the protests of closing the doors of the Courts on May 20. News outlets published a Tweet posted by Freedom House International Law Enforcement Officer, Nate Schenkkan, where he criticized the steps taken by the Armenian authorities.

Schenkkan’s words were presented without explanation that that record was made on his personal page. For example, Lurer.com wrote, “the threat was always that Pashinyan would bring back populism: First international response.”

The use of such titles created an impression that Schenkkan had expressed the official position of Freedom House, which was not the case.

On May 25, 168 Zham newspaper wrote that Minister of Foreign Affairs Zohrab Mnatsakanyan’s well-being had abruptly worsened after a telephone conversation with his Russian counterpart, Sergei Lavrov.

The newspaper claimed that the publication was based on “very reliable” information but they did not present evidence of their source of information. The spokesperson for the Ministry of Foreign Affairs Anna Naghdalyan denied the news, noting that the minister was not in the country during that period.

Smoking is harmful (both for girls and boys)

Mayor of Echmiadzin Diana Gasparyan was accused of smoking out in the open in one of the kindergartens of the city “in the presence of parents and children.” Referring to the newspaper Zhamanak, media outlets wrote that Gasparyan had received a reprimand from parents for smoking and emphasized the gender distinction associated with smoking. “What an example this is for children, especially girls.”

Diana Gasparyan denied the news and said that “the article was written as per order.” Gasparyan also said that she is going to sue Zhamanak newspaper.

On May 23, a rumor spread that the Former Deputy Minister of Defence Samvel Karapetyan had organized a secret meeting of a group of generals from Artsakh with oligarchs, which was also attended by Samvel Aleksanyan. Again, referring to Zhamanak daily, this publication was republished by news.am, tert.am and a number of other news and mushroom websites.

The article alleged that “the participants swore to do everything to discredit Nikol Pashinyan’s authority,” but did not present a single piece of proof for these allegations.

The news was denied by Samvel Karapetyan calling the publication “provocative misinformation.”

Old news in the place of new

On May 22, the statement from the Artsakh Republic Parliament, expressing deep concern over the events in Armenia, had spread.

The news, however, was not fresh. The statement of the Artsakh Parliament was made in 2018 during the Velvet Revolution.

The old news was published as new by Aurora radio station and the website Azat.tv. The Artsakh National Assembly issued a statement urging “not to spread any information concerning the National Assembly of the Republic of Artsakh without fact-checking.

Arsenal did not dance Kochari in Baku

Arsenal forward Pierre-Emerick Aubameyang has posted a video of his team’s training before the UEFA Champions League final match in Baku. The Telegram channel Baghramyan 26 disseminated the photo with an inaccurate interpretation, saying that the players had danced Kochari in honor of Mkhitaryan, who had not come to Baku because of security reasons.

With such commentary, the news spread and was denied by a number of media outlets. ArmComedy also touched upon the Kochari photo, publishing a humorous picture with the title, “Arsenal players are beating wool in the Baku stadium in support of Mkhitaryan.”

The domestic dispute was politically motivated

On May 26, information was spread that a Para TV employee was stabbed at a rally of Nikol Pashinyan supporters.

The news was fake. Police clarified that the employee of Para TV was injured during a domestic dispute and not at the rally site but at one of the residential buildings on Saryan street.

The meeting between Nikol Pashinyan and Vladimir Putin scheduled for May 29 at Nur-Sultan did not take place. Pashinyan and spokesperson for the Prime Minister, Vladimir Karapetyan, insisted that the meeting was not intended.

Fip.am mentioned that the Spokesperson of the RF Federal Council Valentina Matvienko spoke about the meeting in April, and Pashinyan later confirmed her words.

The Prime Minister’s spokesperson said that two meetings between Putin and Pashinyan were held in Nur-Sultan, which were informal.