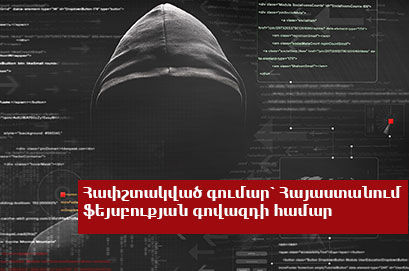 On May 17, Facebook users started to receive strange Armenian-language political ads from the Peruvian Music Group page. The advertisement promised to “clean up the internet from Sorosian grant-eaters.” As it turned out, hackers broke into the music band’s page to plunder their advertising money.

On behalf of national values

The advertisement is presented on behalf of the Digital Granate initiative. The authors threaten to block Styopa Safaryan, Daniel Ioannisyan, Levon Barseghyan and Lara Aharonyan’s Facebook pages. The advertisement speaks about the spreading of “perversion” by the defamation of “national values and religion.” The post also speaks about a recently published book which has been criticized by nationalist activists, s “My Body is Private.”

The authors promise to continue their activities. “Take the sexual education book intended for 6-year-olds and educate each other, the important thing is to keep away from our children. From now on we will provide this distance on the internet.”

The advertisement was circulating from the page Franco Cáceres – Cusco Rock, which has about 3,300 followers. It was created in 2010 and represents a musical band. The page posts are in Spanish and refer to group activities, concert video clips, event announcements and more.

We contacted the admin of the page Franco Cáceres – Cusco Rock, who presented himself as Franco Cáceres. He told media.am that earlier on he noticed a strange post in an incomprehensible language. “I immediately deleted the publication and tried to figure out what it was. Then I saw that a large sum of money was taken from my Facebook account and credit card, and I assumed it was for that publication,” said Cáceres.

The members of the Digital Granate hacked the Franco Cáceres – Cusco Rock page to place an advertisement as a result of which they received the bank card information attached to the page. Using them, they have paid for ads. According to Cáceres, $120 had been stolen from his account.

Cáceres changed the page’s password and informed his bank staff. However, during our conversation, the attempts to charge money from his card continued, this time for $160 (media.am has a screenshot of a rejected financial transaction).

The page Digital Granate was created on May 17. It is a public initiative. The only post on the page is the above-mentioned advertisement with the photos of Styopa Safaryan, Daniel Ioannisyan, Levon Barseghyan and Lara Aharonyan. Lara Aharonyan’s page was blocked three days ago.