What News Circulated And Was Refuted Between May 1-15 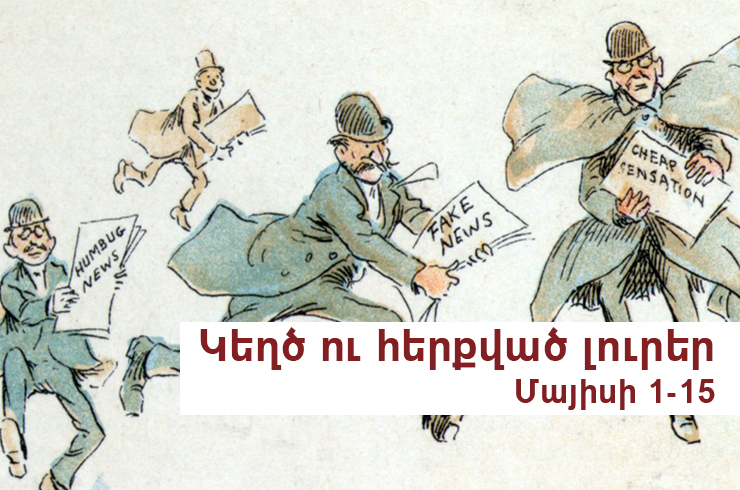 In the first half of May, false information about the Open Society Foundation and the “Gardasil” vaccine were spread once again.

On May 2, Hraparak daily quoted their PAP source as saying that the party MPs would put down their mandates if the leader of the party Gagik Tsarukyan tells them to. Then, the newspaper published a comment on this occasion from one of the “famous constitutionalists” “The Constitution prescribes that 30% of the parliament should be opposition, even without Bright Armenia, PAP, the parliament will become unconstitutional if the mandates are put down… This anti-constitutional situation will  lead to snap parliamentary elections.”

However, fip.am discovered that this claim is wrong. The  Constitution of the Republic of Armenia clearly stipulates all cases when the National Assembly can be dismissed if the Prime Minister is not selected for two consecutive terms or if the Government program is not approved twice, The fact that the opposition should form ⅓ of the parliament is regulated by the Electoral Code.

Media.am has reported on the untrue arguments of the report made byChannel 5 on May 2, “Compulsory Vaccinations? The Polyclinic Keeps Silent.”

The report’s assertion that 13-14-year-old girls of one of the schools in Abovyan were forcefully vaccinated with Gardasil was based on the story of Vrezh Aghajanyan, a physical education teacher, However, he later wrote in a Facebook post that his words do not correspond to reality.

The journalist’s claims that 13-14-year-old students were sent mobile messages multiple times encouraging them to get the vaccine was also false. The message was sent to all subscribers of Ucom and VivaCell-MTS operators, without any age restrictions.

There was also a lie about the fact that Gardasil was expired. Responding to media.am’s inquiry, the Ministry of Health informed that the Gardasil which was imported to Armenia in 2017 will expire on 10.12.2019 and the ones imported in 2018 will expire on 04.17.2020.

False information based on an already nonexistent source

Marina Khachatryan, a former council member of the Yerevan Council, shook hands with Austria’s chancellor Sebastian Kurz who, according to a report on May 9, gave Open Society Foundation 28 days to close.

The News was written and reposted by several Armenian news outlets, and some of them published denials. The denials and news were also spread in 2017 when the source of the news was written on Yournewswire.com. IT turns out that while the news was being spread,  the foundation did not even have an office in that country.

Although the news was removed, and the name of the website changed, this did not prevent the Armenian media from linking to an already nonexistent newsletter. By the way, the source for the Armenian media has appeared on cbsnews.com’s list as a fake news website and poynter.org had written back in 2018 that this was one of the most popular platforms in the world that spread fake news and conspiracy theories.

Angela Kzhdryan, who was appointed Press Secretary of the Minister of Education and Science of Armenia on May 6, had the opportunity to deny three pieces of news.

The patient did not die in the Sanaviatsia helicopter

The Ministry of Health refuted the May 2 publication of Zhoghovurd newspaper whereby the Sanaviatsia helicopter was not adapted for providing medical services. The reason for the news was the death of a man who had been transported from Vanadzor Medical Center to Yerevan by these helicopters several days ago. The newspaper said that it had received information that the patient actually died in the helicopter and not in the hospital.

Press Secretary Alina Nikoghosyan denied the news completely. “The patient has been transferred to Erebuni Medical Center and has been diagnosed with cardiac arrest.” As for the helicopter, she writes, “According to the flight manual as approved by Airbus Helicopters (as the manufacturer), it is intended for medical purposes, and the transfer of the patient by helicopter is organized by emergency medical care and service and through resuscitation brigades of the Third Level Resuscitation Service.”