A Story Of A “Sorosian” Image 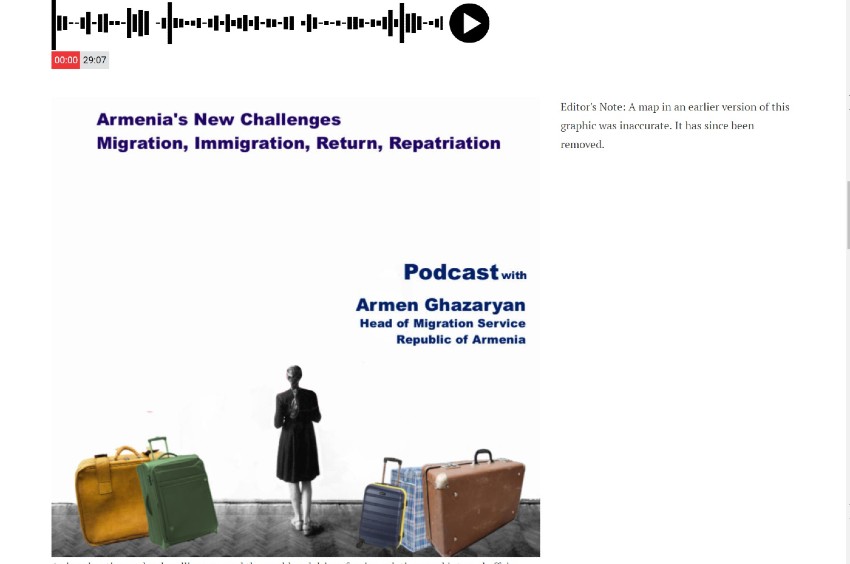 The Facebook page Stop Soros Armenia is one of the resources targeting the civil society organizations in Armenia. The page was created in 2019, on March 1, and as of April 25, it has 798 likes.

In the second half of April, this Facebook page targeted EVN Report.

Called “Sorosian,” it turns out that the media outlet is actually not getting a grant from the Open Society Foundation-Armenia. Their funding sources are available on the front page of their website.

At first, a picture was placed on EVN Report’s website’s publication “Armenia’s New Challenges: Migration, Immigration, Return, Repatriation,” of a map which did not include the Syunik region and Nagorno-Karabakh.

Stop Soros Armenia, spreading the screenshot of the EVN Report’s publication writes, “The website EVN evnReport funded by Soros and the American organization NED, uses a map without Syunik and Artsakh. The Website is in Armenia and the editorial staff has “Armenian” surnames. The Editor in Chief, maria tititzian, Editor rubina markosyan, A THOUSAND SHAME #StopsorosArmenia.”

In the comments under the post, the administrator of this Facebook page places the links to the editors’ Facebook pages and email addresses as well as the phone number of the editor-in-chief, of EVN Report, Maria Titizian.

This is followed by comments containing insults and hate speech, even suggestions of shooting them or reporting them to the NSS.

What did the editorial do and what happened afterward?

During this time, the editorial staff of the EVN report decided to change the image of the article, leaving the following comment, “Editor’s Note: A map in an earlier version of this graphic was inaccurate. It has since been removed.”

In an interview with Media.am about the problem, editors of EVN Report said, “The map did not mean anything, it was just a graphic but as it disturbed some of the public, we made the decision to remove the map and wrote about it very clearly.”

One of the respondents told Stop Soros Armenia about the change in the picture at EVN Report. They answered, “Deleted without giving an apology. But there is a screenshot.”

The page administrator did not inform the audience that the site had changed the published image and made a special note about it.

The post on the Facebook page Stop Soros Armenia was made on April 18, but until now it is being spread actively across Facebook. The page’s info and ad function make it clear that it is a sponsored post on Facebook. His entry was shared on April 25, at 22:30, 104 times.

As a result, if a person doesn’t open and read the commentary on the Stop Soros Armenia post, if they don’t check the publication on EVN Report’s website, then they will be left with an old piece of newly worrisome information.