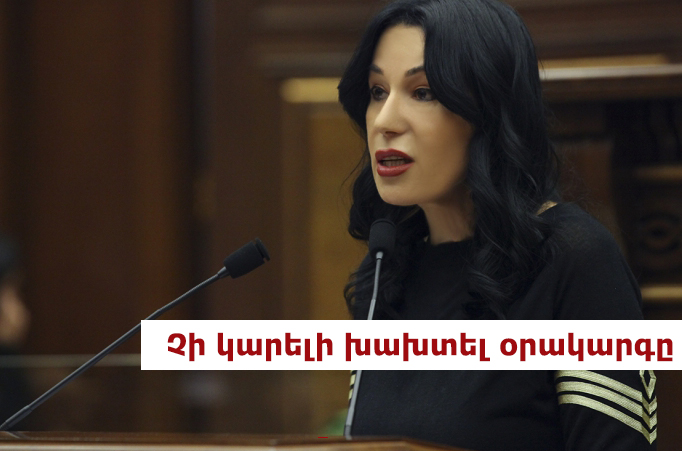 On April 5, the speech of a transgender woman shocked NA deputy Naira Zohrabyan from the podium.

“National Human Rights Agenda: United Nations Universal Periodic Review” was held at the initiative of the NA Standing Committee on the Protection of Human Rights and Public Affairs with the support of the United Nations and the Ombudsman’s Office. The commission is chaired by Naira Zohrabyan.

The United Nations Universal Periodic Review targeted all human rights records in all UN Member States. The Human Rights Council gives states the opportunity to present what steps have been taken to improve human rights and fulfill their responsibilities in this area.

What happened near the NA podium?

The speaker was a transgender woman, Lilit Martirosyan, head of the NGO “Right Side.” Her speech was on human rights, about transgender community issues. Lilit spoke on behalf of transgender people who were subjected to various physical, psychological, social and economic violence and presented their figures until 2018 when their NGO documented 283 cases of violence against transgender people. According to her, a small minority of these cases were admitted to the police and other relevant bodies.

The head of the Right Side NGO also spoke about the fact that transgender human rights activists are subjected to physical violence and persecution. She calls for the promotion of gender equality, human rights, and the pursuit of policy and legislative reforms.

Naira Zohrabyan, the chairperson of the session, reacted angrily. She declared that the speech does not fit in the agenda and concluded, “Your rights are not violated by anyone, but we have a clear agenda today and you are violating that agenda. I consider this disrespectful attitude towards the commission, the protection of human rights, human rights and our announced agenda.”

Naira Zohrabyan said that there were 3 topics in the agenda of the hearings, problems of the judicial system, children with disabilities and orphanages. Zohrabyan insists that Lilit Martirosyan’s speech was outside the agenda.

Later, in an interview with medialab.am, Zohrabyan explained her frustration in this way, “I was so shocked that I didn’t even hear a word of what she was saying. First of all, this was the first time I had ever seen such a subject in my entire conscious life, second of all, I was very insulted that some parliament members tried to turn a very serious talk into an epatage.”

Naira Zohrabyan’s statement that Lilit Martirosyan’s speech was not on the agenda items, was not accepted unequivocally.

1. LGBT community-related Pink law-enforcement NGO and several other NGOs have reported that such thematic limitations were not envisaged in the pre-published communications on the parliamentary hearings and on the agenda.
“Moreover, the agenda issues included the issue of strengthening the principle of non-discrimination, which was fully consistent with Lilit Martirosyan’s speech,” reads the statement.

2. Arsen Babayan, former Deputy Head of the National Assembly Staff, responded to this incident by writing on his Facebook page, “ Professional observation: Yesterday, the issue raised by the transgender in the parliamentary hearings was fully covered by the agenda of the hearings within the framework of the “judicial-legal reform” issue.

The comments also complimented, “if we do not want any particular group of people’s rights to be protected, then it is necessary it cement it in the Constitution.”

3. Zaruhi Hovhannisyan from the Coalition for Violence Against Women posted on Facebook claiming that there were no subject restrictions.

4. Member of the My Step bloc, Maria Karapetyan stated at the NA April 8 sitting that Naira Zohrabyan was lying by saying that the committee set clear topics for the hearing agenda. Karapetyan said that the agenda was posted on the NA website and was removed from the website days before the hearings.

The MP explains that, since there were not topics at the time of registration, it was a lie that the NGOs were urged to be registered only if they had speeches on the agenda topics. She also said that they had seen the thematic agenda for the first time in the NA hall.

5. The topic of the NA hearings describes was described by the head of the EU Delegation to Armenia, Ambassador Pyotr Svitalsky. According to the official statement, “Svitalsky highlighted the key issues for the EU on gender equality, women’s empowerment, issues of employment and social rights.” The EU Ambassador’s words do not correspond to Naira Zohrabyan’s agenda and emphasize a much wider topic of hearings.

On the NA website, indeed, there is no April 5 session agenda. There is only a hearing announcement published on March 15, which does not specify the agenda and does not mention thematic limitations.

The amended agenda was available to representatives of the NGOs only on the day of the hearing. Even if we admit the limitations on the agenda, professional observations suggest that in that case, Lilit Martirosyan’s speech falls within the agenda of the hearings.