What News Circulated And Was Refuted In February 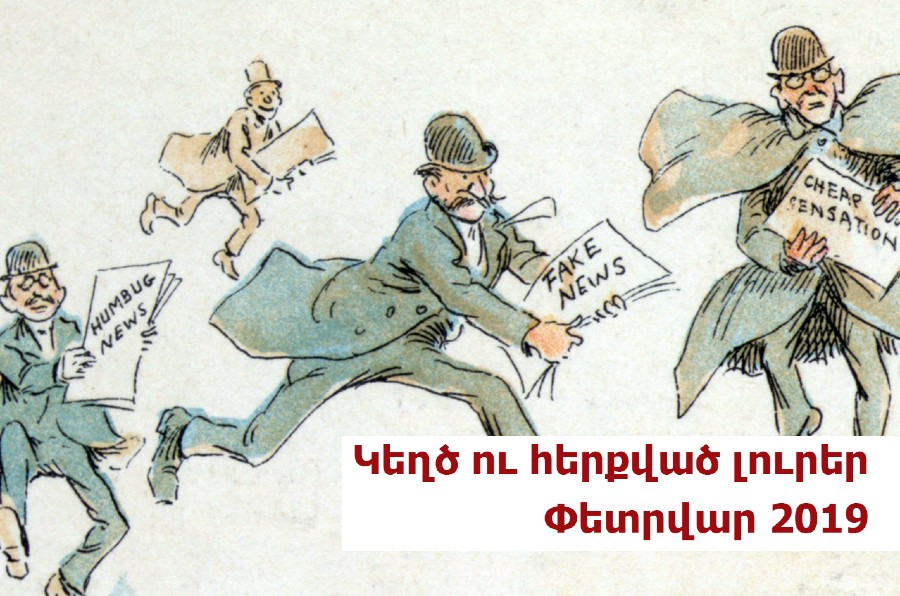 Fakes and false news are everywhere and not just in in Armenia. Press Secretary of the Prime Minister of the Republic of Armenia, Vladimir Karapetyan, writes about them: “I am deeply convinced that today we are dealing not with restricting the press but with a fight against fake news.”

Media.am has found out what rumors have been circulated and later refuted in the field of Armenian media in the month of February.

They said there were resignations

On February 7, a number of websites spread information on the denial of the resignation of the Minister of Transport, Communication and IT, Hakob Arshakyan. The spokesman for the minster wrote on his Facebook page, “… the news about the resignation does not correspond with reality.”

Zaruhi Mejlumyan, Head of the Public Oversight Service, Media and Public Relations Department, denied the news of her release.

And the news of he resignation/dismissal of the State Revenue Committee’s chairman was circulated at the end of 2018. The news circulated again in February and was denied by the head of the public and information department of the SRC, and then by Davit Ananyan at the Facebook press conference at Freedom News TV on February 25 (12:33 minutes).

The last news of the month of February was that of the intention of the mayor of Yerevan to resign. This was reported by 168.am on February 27, referring to their “reliable sources.” However, the site received information from the Yerevan mayor’s spokesperson that the news was falsified, but he did not believe it and referred to the case of ex-mayor Taron Margaryan’s reignaton, when the City Hall press service also denied the news of the resignation.

Although the news was officially denied, the website news.am reprinted it saying, “Hayk Marutyan wanted to resign: 168.am”

A revised list of books purchased by the Prime Minister

On February 9, Nikol Pashinyan posted a photo of “interesting books” that he bought “in the framework of an evening reading concept.”

The choice of the Prime Minister’s books became a topic of discussion. The Facebook user named Arthur Khachatryan also posted a screenshot of Pashinyan’s post with an edited list of books. The fake picture was made using the example of the post made from Nikol Pashinyan’s profile and included information on the views and shares.

The expensive bag of the NA minister’s wife

The photographs of Ararat Mirzoyan’s wife, Gohar Abajyan, at the fraternal memorial in Stepanakert on February 9 were also discussed.

Facebook user Narek Malyan made a post based on these pictures, mentioning that her handbag from the brand Herme and costs $130,000.

Touching upon these discussions, the NA minister’s wife responded that the bag cost somewhere between $100-250 instead of $130,000, and that it was not a Hermes bag but Longchamp Roseau. Moreover, the bag did not belong to her rather was borrowed from her sister.

In the same comment she also mentioned that instead of 1.5 million, her coat was worth 140000 AMD which she bought at a discount of 72,000 AMD. She also said that she does not have a bodyguard, let alone an “umbrella holder,” and that she thanked the security serviceman for his thoughtfulness during the rain.

Soviet Education (had not) reached the UK

On February 25, a report was published on 168.am that “The the UK has switched to the USSR educational system.” However, the material wa later removed from the site.

Deputy Minister of Education and Science Arevik Anapiosyan touched upon the news.

“This article is misinformation! This appeared on the internet on November 23, citing a Georgian language website, which in its turn referred to the BBC report, where the UK Minister of Education had supposedly said something like this. There is no such news on the BBC website!!!”

Minister Justine Greening also wrote a response which is quoted in the news back in January 8, 2018 that she had resigned. Therefore, she could not have made such a statement as the Minister of Education in the Uk in November 2018.

Fip.am, a fact-checker, also confirmed the fraudulence of this news. And in 168.am, another article is cited in the article, but Google-Cache makes the removed fake content available.

News about drug candy is not new and not Armenian

On Facebook and on several social networks on February 25, posts were circulating that candy-like drugs were being distributed to children on the streets.

Following the tracks of the news, media.am found out that this panic-producing and unconfirmed news “roamed” around the world – Rusia, Ukraine and Kazakhstan. According to the American website, snopes.com, similar news began to circulate in the western states in 2007. The site confirms that the police did detect candy-like drugs, but there are no convincing arguments that the candy-like appearance was done purposefully with the goal of tempting children.

By the way, the RA Police stated that they did not receive such alerts.

Arshaluys Barseghyan
The Image used was an illustration by Frederick Burr Opper, 1894