An Attempt to Verify Remarks of Public Significance 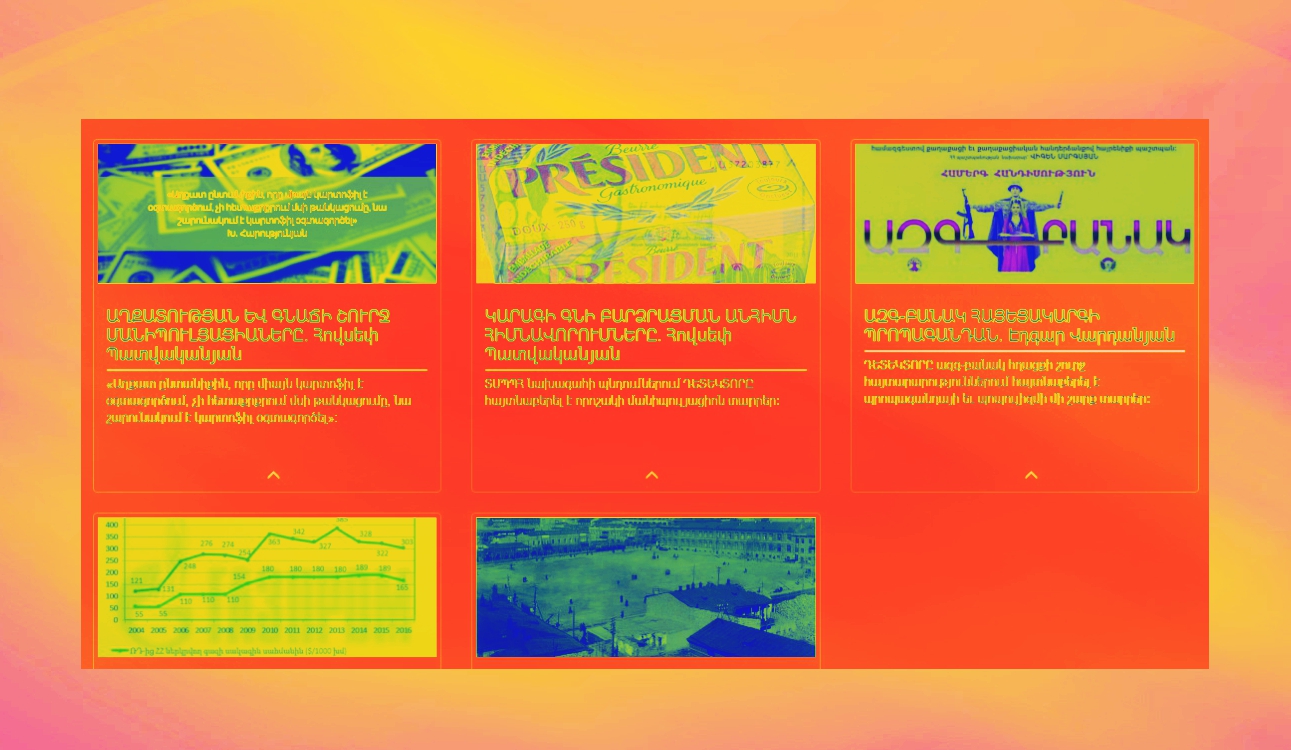 A section on Boon online TV on populism and propaganda in Armenia emerged from a daily need.

Now, when everyone produces (and continually so) texts, ideas, and different mental structures, there arises the need to categorize, analyze, and again categorize them. Especially when “creators of words” possess also the skill to get those words to as broad an audience as possible.

And it would be good to understand how remarks that are massively spread influence and with it shape public opinion.

Boon, which is a scientific and cultural foundation, has already managed to form a community of experts, and using this potential has undertaken the study of messages that influence public opinion.

Research has been done to talk about populism and propaganda on through what narratives these concepts reach our public arena. And, in general, with what sort of tools they are created. Taken into account has been that tricks that are more subtle and have mild effects, which influence public opinion indirectly, have been added to the “traditional” toolkit.

For example, in Armenia, populism and propaganda are often connected to issues of nationalism and poverty, around which different levels of narratives are constructed.

Boon cofounder Gemafin Gasparyan says that the idea passed through three main stages. The first was the research and the description of populism and propaganda methods.

And then, added to the theoretical part was the lecture series, and the site Detector.am was created, which analyzes the examples of discursive propaganda and populism in Armenia.

On Detector.am, statements of public significance are observed, but an attempt is made not to personalize the words or the message, but to find the nugget of manipulation and dismantle it — for example, the manipulations around poverty and inflation, or the “nation-army” link.

The texts are accompanied by a short “recipe” that shows what the “ingredients” that make up the statement in question are. For example, exaggeration of facts, distortion, labeling, etc.…

“When we say ‘fact-checking,’ we usually mean distinguishing the lies from the truth. But we’re more interested in the layers found between them. Ultimately, facts too can be arranged in such a way that propaganda manipulation arises as a result,” says Gasparyan.

If you know the propaganda tricks, then you can later distinguish them also in other texts.

“This is needed for both the media industry and those making statements. We all want journalists to ask questions that won’t get manipulative answers — and of course, for those who make such manipulative statements to take some responsibility,” says Gasparyan.

He reminds us that many officials easily and quietly ignore the insults and accusations made against them, and when the criticism is substantiated and ‘respectable’ so to speak, the likelihood is greater that this official next time will at least think a little before saying something populist.

Boon understands that there’s always the danger that they themselves can fall into the trap of populism.

“We try not to be vulnerable in both our words and our choice of topics. Of course, no one is immune to mistakes, but we’re trying to minimize this risk. If you become unreliable in a minor detail or wording, you immediately lose confidence. It’s very difficult to find facts, since sometimes the same fact or figure is presented differently in different sources.”

Only data from open sources become the basis for Detector.am. “Insider information very often is itself manipulative,” says Gasparyan.

The examples so far are from economic and political areas. These two branches are verifiable. In one, there are facts; in the other, specific methodology.

Boon aims to expand its scope of topics, touching upon visual manipulations and sociology. It’s now seeking partners, since creating analytical pieces requires time and effort. “It’s also a task that loves details, and details are the hardest to gather and check,” adds Gasparyan.

And it is the details and meanings found in between the lines that often change places in the chain of propagandist and propaganda recipient. Propaganda cites public opinion, to advance ideas not entirely in the public interest.

“I see propaganda in Armenia today in two main discourses: Christian (we’re all to blame, and so no one is to blame) and humanist (we’re all equal, all the same, one nation, one culture, one army). Taking place is a blurring of responsibility and many narratives appear. Dismantling these two discourses is very difficult because they’re archetypal by nature,” says Gasparyan.

Armenia’s media outlets do not accept being a link in a chain, whereby a media outlet’s or platform’s work becomes the raw material and basis for further development of and focus on the topics by another media outlet.

It’s always more effective when the topics continue, branch, and enter the field of discussion. In addition, when the propagandist tries to present certain topics as inviolable, sacred, and unable to be discussed.

“It may sound romantic, but ultimately, our goal is dialogue — and this doesn’t start with insults. Ultimately, if we want the public to respond, a certain level of discussion must be proposed. In the Armenian media sector, the (forgive me for this word) hysterical tone is great. In my opinion, this interferes with understanding the issues,” says Gasparyan.

This Boon initiative is just one step that will help not to mock, tease, or ridicule ideas, but to analyze their prospective significance. Say, to sweep the manipulative dust off of words and study the skeleton of meanings.

The public often unconsciously shares propaganda or populist materials. For example, there are groups on social media that seemingly have been created to spread media literacy, to fight against manipulations, but they’re the first ones to engage in manipulation.

But in all cases, reviewing and reorganizing meanings helps to preserve the public energy, and not split, crush, or discard it.