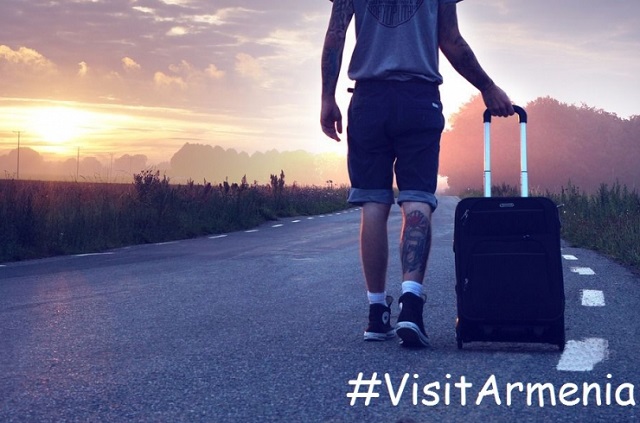 In 2003, the Armenian government recognized tourism as a main branch of the economy. As a result of tourism industry events, the plan became to increase tourism’s contribution to increasing the national income, proportionate to regional development, increase in the population’s standard of living, and poverty reduction, due to

In this article, we attempted to study the trends in the development of the tourism industry by the numbers.

Though Armenia has identified the tourism industry as a priority sector, it still occupies an insignificant place in the volume of international travels in the world (in 2016, about 0.1%). According to the World Tourism Organization, a tourist spends on average 17 days in Armenia, spending around US$780.

Tourism’s role in the economy, 2016 results

Around 39 thousand people are directly employed by the tourism industry, or about 3.3% of the total employed.

Around 144 thousand people are generally employed by the tourism industry, or about 12% of total employed. The share of investments in the sector, which is a unique indicator of qualitative developments, is about 4.4% (or 49 billion AMD) in Armenia.

What do cross-country comparisons of the tourism industry’s relative magnitudes tell us? 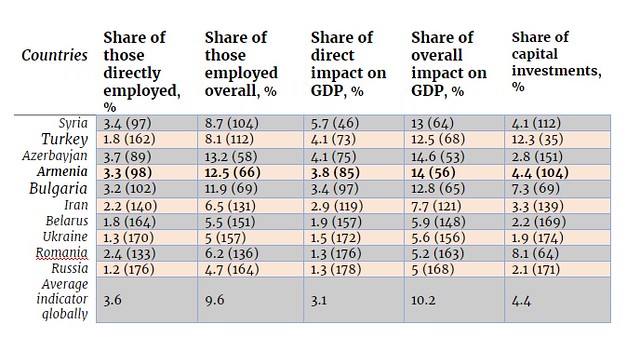 As we can see, in almost all the indicators, Armenia, despite defining tourism as a priority sector, falls in the second half. Even the comparison of relative values doesn’t speak to the high quality of tourism in the country that is regularly peddled by officials.

Question 1: How many tourists stay in hotels?

One of the qualitative characteristics of the tourism industry is the load on the hotel economy.

Though there is no noticeable qualitative development in terms of tourists, the number of hotels and guesthouses is gradually rising. The lack of qualitative development is due to the fact that more than 60% of the tourists coming to Armenia have Armenian roots, and they prefer to stay with friends and family than take advantage of hotel services.

Table 2: Inbound tourism and the load on hotels

Basically in terms of loading, there can be no talk of qualitative growth. The main segment of visitors are fellow Armenians; thus, that growth doesn’t lead to the development of related infrastructure, while the quantitative growth of tourism is to some extent also the result of emigration, which cannot be considered long-term and sustainable.

Graph 1: Inbound tourism and the number of people who stayed in hotels

Question 2: The geography of inbound tourism

Though Armenia is a member of the Eurasian Economic Union and the high potential of tourists from other EEU countries is regularly touted, “other countries” and the “European Union” still have a significant share of the number of tourism arrivals to Armenia.

In the same period, inbound tourism to Armenia from “other countries” comprised 2.6 million tourists; from the EU, 1.9 million; and from the Commonwealth of Independent States (CIS), 1.6 million.

Table 3: The geographical distribution of tourists who visited Armenia 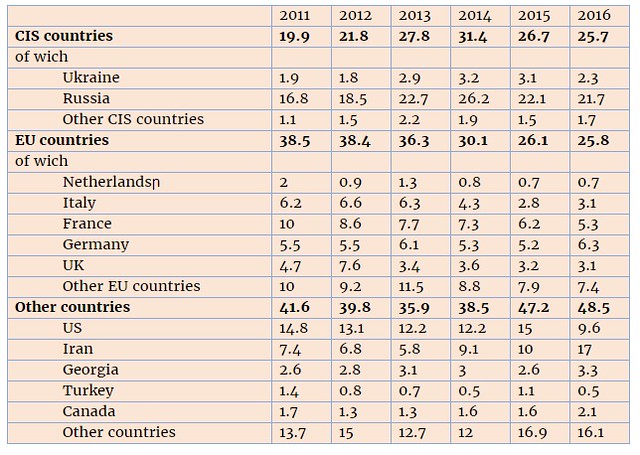 Graph 2: The distribution of inbound tourism to Armenia, according to regions (2011–2016)

In terms of the geography of the countries, we tried to study also the main countries from which people came to Armenia, presented in Table 4.

Table 4: The dynamics of inbound tourism 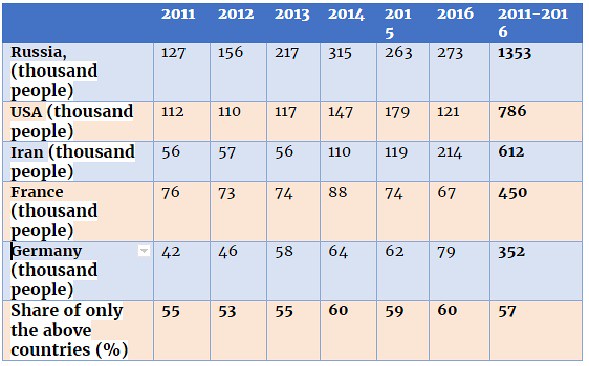 As we can see, the country leading the list in terms of inbound tourism is Russia, followed by the US, Iran, and France, a fact due to the concentration of Armenian communities in these countries.

Moreover, as we can see from the table, more than half of all inbound tourism can be attributed to the aforementioned five countries.

Question 3: The results of the comparison between tourism arrivals and departures

The next qualitative focus is the comparison between tourism arrivals and departures.

As we can see, in 2016, for the first time, more tourists left than arrived to Armenia, which also doesn’t speak to the sector’s qualitative growth.

Question 4: How does tourism impact the balance of payments?

The plan is also to triple inbound tourism in the next 5 years. However, the statistics don’t reinforce these hopes.

Which means for tourism services in Armenia, more currency flows out than is generated.

This indicator, by the way, is intensifying, which also speaks to the industry’s qualitative issues. 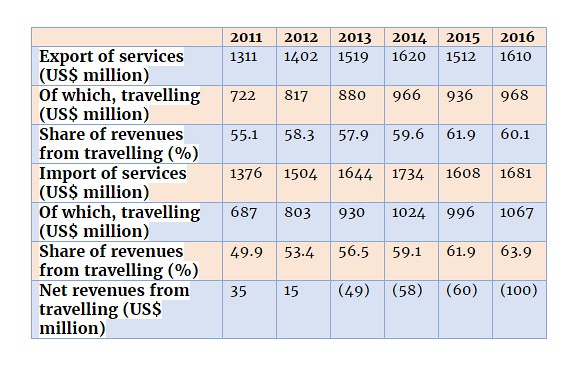 Revenues from tourists visiting Armenia are not great, since prevalent in inbound tourism are Armenians from the diaspora, who visit their friends and family.

The trends in emigration from Armenia, as well as the increase in longevity worldwide and Armenian being relatively unrecognizable increase the likelihood of a quantitative increase in inbound tourism, but there are fundamental doubts in terms of qualitative and long-term growth.

Tourism in the media

Media reports about tourism increase when official figures are released. For example, recently there were many news stories that an unprecedented growth of inbound tourism has been recorded in Armenia in the past six months. There are also mentions of problems, but these are mainly not in-depth and not causative.

A general picture of tourism can be had from the article “Tourism’s Role in Armenia’s Economy,” where presented are the picture in numbers, and the prospects of and problems that hinder the development of the sector.

In any case, considering the sector’s importance, we need to keep the problems in focus and regularly address them in the media.