Ceasefire Or Surrender? The Statement That Changed Everything 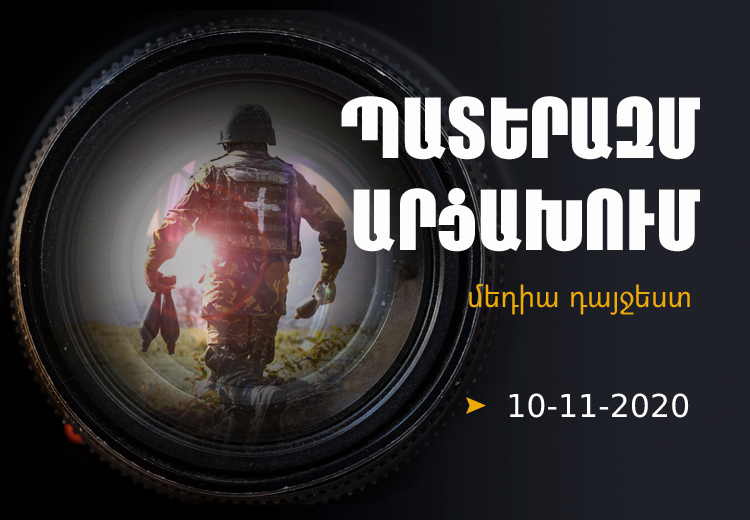 The night of November 9 to 10, 2020 will remain the most disgraceful page in the history of the Karabakh conflict for the Armenian side. These and various other evaluations can still be found in the Armenian media.

According to the statement, all hostilities in the Nagorno-Karabakh conflict zone would cease on November 10, 2020, at 00:00 Moscow time. Azerbaijan and Armenia would stop in their positions.

The following points indicated the deadlines for the regions and territories to be handed over to Azerbaijan and the deployment of Russian peacekeeping troops along the Nagorno Karabakh line of contact and along the Lachin corridor, the exchange of prisoners and the return of refugees.

Unlike the previous three ceasefire statements, which we referred to earlier, this one was not violated; at least, there isn’t a large-scale war anymore, thanks to the peacekeeping forces stationed in the conflict zone.

The main person responsible for the statement, Prime Minister Nikol Pashinyan, received various evaluations, mainly negative, because, according to the evaluators, “he signed a surrender agreement, he is a traitor, he sold Artsakh” and so on.

Official Clarifications: Why did the Armenian side take such a step?

Nikol Pashinyan himself noted in his statement that he made a very difficult decision for everyone, “I made that decision as a result of an in-depth analysis of the military situation, the assessment of the people who know the situation best. Based on the belief that this is the best possible solution in the current situation.”

Artsakh President Arayik Harutyunyan noted that “taking into account the current difficult situation, in order to avoid further large-scale human losses and the complete loss of Artsakh, I have given my consent to end the war an hour ago.”

According to Deputy Prime Minister Tigran Avinyan, the hostilities in Karabakh were at such a point that the consequences could have been worse. “This was a painful, forced decision… The decision was not made in a hurry, rather by assessing all the dangers and risks.”

According to former Defense Minister Davit Tonoyan, the Defense Army acted in a total blockade in terms of armaments and military equipment, “doing its utmost” to resist the super-armed forces of Azerbaijan, which were supported by Turkey in terms of human resources, armaments and command staff, also “sending” mercenary terrorists.

According to RA President Armen Sargsyan, he was informed by the press about the announcement and the conditions for ending the war.

“Taking into account the current situation, the deep concerns of a large part of the people, I immediately initiate political consultations, in order to coordinate the solutions arising from the agenda on the protection of our national interests, as soon as possible,” the President said.

The protests following the announcement

“The heavy mood that has descended on Armenia and Artsakh since last night is getting heavier every minute. In fact, after the announcement of our defeat is published, many people are on the streets, angry or, if you like, crazy,” the host of Channel 5 said at the start of the “Haylur” program. 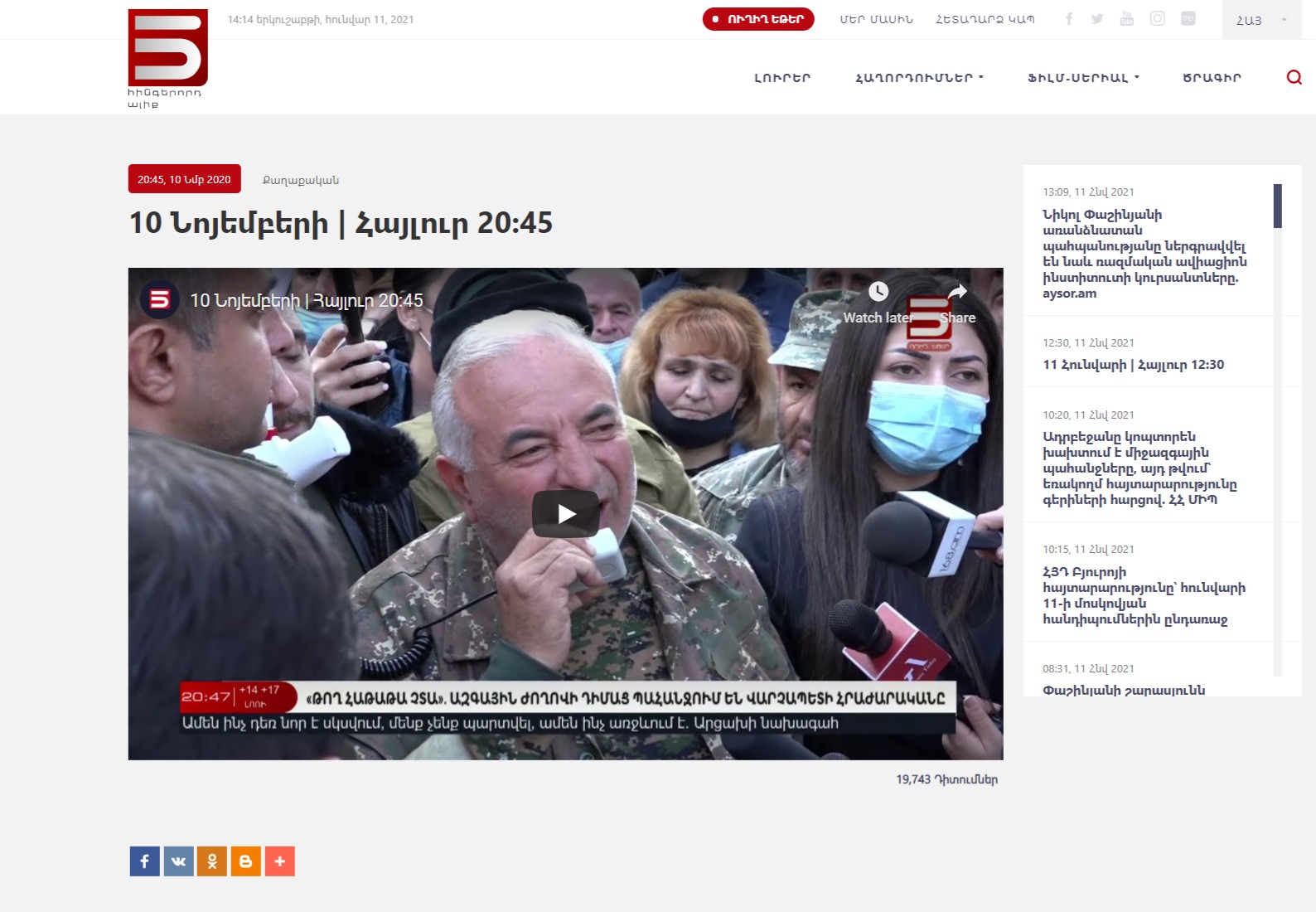 “Haylur” reports were about the actions held in the yard of the National Assembly and in front of the government building demanding the resignation of the Prime Minister.

“I am appealing to Nikol Pashinyan, did you say I will not sign a document behind the people’s backs? Did you say I have no right to decide the Karabakh issue? That Karabakh has the legal power. Did you say, Mr. Pashinyan, we are waiting for your answer?” “That signature saved the rest of our Armenians’ lives,” “Managing the operative-tactical situation for 30 days, then you sign a surrender․․․ I’m asking a question, why didn’t you do it 10 days ago?” “If they had made a decision sooner, we would not have had so many victims, the women gathered near the government are sure.”

As reported by “Haykakan Zhamanak”, “there have been riots and mass demonstrations in Yerevan and the regions since last night.” “At night, protesters stormed the government building, smashing doors and windows and destroying indoor halls. The men had beaten NA Speaker Ararat Mirzoyan near the National Assembly and attacked the government residence. In the morning, the protesters broke into the National Assembly building again.”

Nikol Pashinyan asked those who believed in him and “those who have nothing to do with the demolishers” to go home.

In order to calm the passions, the Catholicos of All Armenians and Catholicos Aram I made a call.

The first President of the Republic of Armenia Levon Ter-Petrosyan made a similar call, noting that civil war, in addition to being a great gift to the Turkish-Azerbaijani alliance, will be destructive for Artsakh, Armenia and all Armenians. “It is imperative to get out of the crisis situation without new losses by avoiding the danger of civil war and to overcoming internal political contradictions in an exclusively constitutional way.”

According to the Secretary of the Artsakh Security Council, Samvel Babayan, he had rushed to Yerevan with the intent of preventing the signing of the treacherous decision, but with the consent of the Artsakh Republic President, the statement was published sooner than Samvel Babayan could have managed to prevent it.

He wrote on his Facebook page “Abstaining from the evaluations of the text of the statement, I should mention that I have repeatedly pointed out a way out of the situation to the leadership of Armenia and Azerbaijan, offered strategic solutions and proposals, but they have always been bypassed, reminding me of my status as an advisor. Dear compatriots, I assure you that even now, in these conditions, there is still hope to save our dignity…”

According to Ishkhan Saghatelyan, the representative of the ARF Supreme Body, one of the ways to change the situation is the resignation of Nikol Pashinyan. “A dignified and proud citizen of the Republic of Armenia cannot tolerate a leader who bows before a Turk, a leader who has signed a humiliating contract with a Turk. He must leave ․․․ We must save the fragments of our homeland. ”

“Nikol Pashinyan is a traitor, he is not a state builder, it is impossible to ensure progress with him,” he said on the “Channel 5” program “Interview.”

According to “ArmNews” journalist Abraham Gasparyan, “the government has gone for a crude option of settlement, which is more a surrender than an option of compromise.”

According to him, we are losing the homeland and we do not have time, we only need sobriety, over-concentration of forces and overexertion to change the situation. “We have to talk to Russia and Iran again, if they see that we reject Pan-Turkism, everything will work out.”

“The interests of Armenia and the Armenian people should be represented by a man who breathes and lives with national vessels, a man with a strong national fist, which will lead to a breakthrough where the logic of the process will change,” said Abraham Gasparyan. 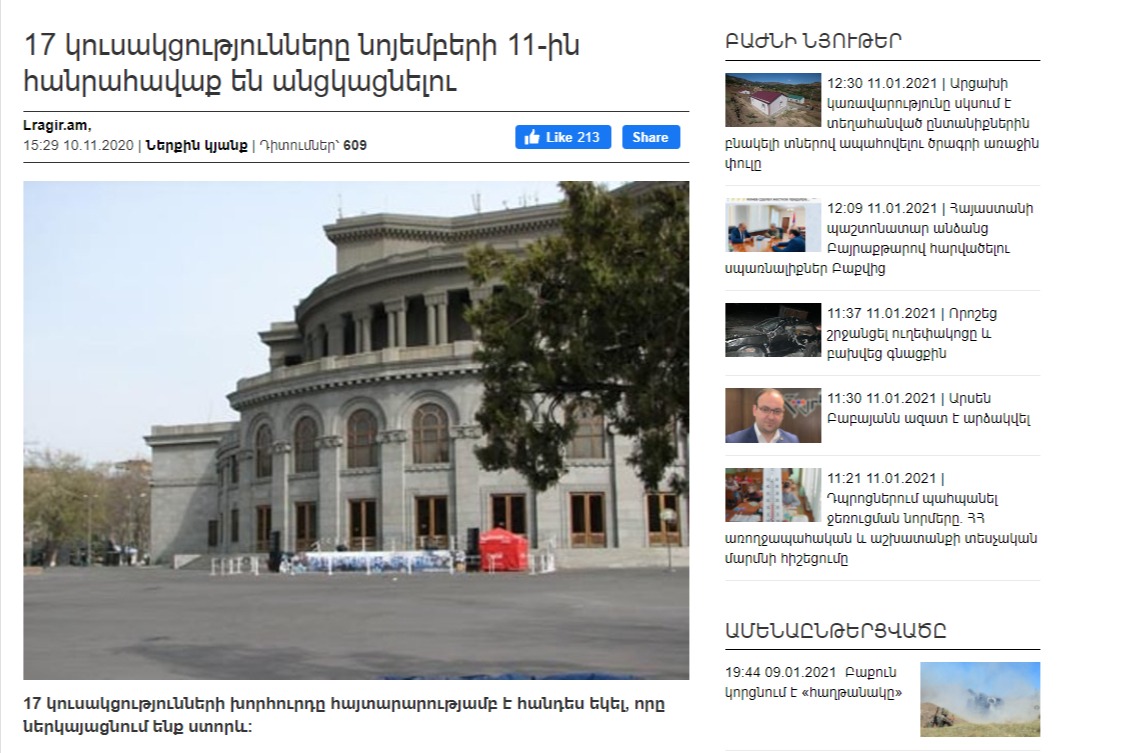 17 parties also started a process demanding the resignation of the Prime Minister, inviting everyone to a rally. The Council of Parties announced, “Unfortunately, the most shameful page in our history was written yesterday. An agreement of national betrayal has been signed behind all of our backs, on the battlefield with a soldier defending his land and statehood with his own blood. At the moment, our collective unity, the exclusion of internal strife and provocations are urgently needed.”

Four parties included in the Artsakh Parliament, expressing support to the above-mentioned 17 parties, demanded from the RA political power to immediately stop any action that undermines the unity of the people, to refrain from looking for an internal enemy in the country. They also demanded the resignation of the President of the Artsakh Republic.

The trilateral statement was immediately followed by rumors about the deployment of Turkish peacekeeping forces in Karabakh, which, however, were later denied by the Russian and Armenian sides.

Only Russian peacekeepers will be deployed on the Karabakh line of contact: This was announced by the official representative of the Russian Foreign Ministry Maria Zakharova.

International reactions to the announcement

The reactions of other states and international media to the declaration of the ceasefire were also covered by the Armenian media.

Among them was the statement of the French President’s press service that France is studying the parameters of establishing a ceasefire between Armenia and Azerbaijan in the Nagorno Karabakh region. The statement said that any long-term agreement should take into account Armenia’s interests and that Turkey should stop its provocations in the region and refrain from any action that could jeopardize the future agreement.

The Iranian Foreign Ministry also stated that it was ready to assist in the deployment of Russian peacekeepers in Karabakh, to support the establishment of lasting peace in the region.

In parallel with all this, the November 10 publications were mostly dominated by critical opinions about Nikol Pashinyan, in which there are many evaluations and accusations.