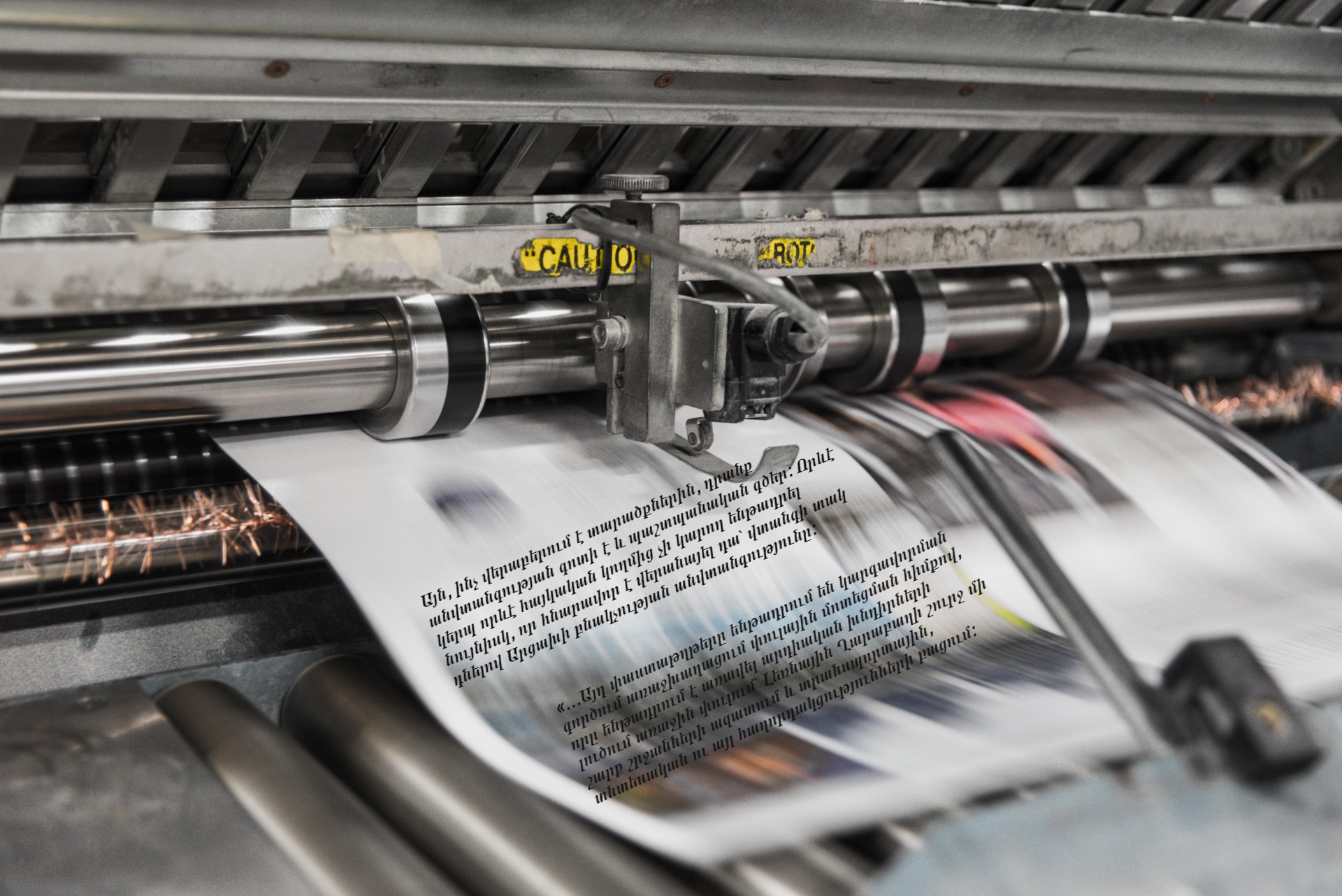 The statement made by Russian Foreign Minister Sergei Lavrov at an online roundtable organized by the Gorchakov Foundation on April 21 received a wide response in the Armenian media.

Lavrov noted that a meeting with the participation of the Foreign Ministers of Armenia, Azerbaijan and Russia and the OSCE Minsk Group Co-Chairs was held in Moscow in April last year. Proposals were made and are currently being actively discussed.

“…These documents envisage progress in the settlement process on the basis of a step-by-step approach, which provides for the solution of the most pressing issues in the first stage: the liberation of a number of regions around Nagorno Karabakh and the opening of transport, economic and other communications. Once we have decided to sign these documents, the most important step will be to implement the resolutions of the UN Security Council, which demanded an end to the war and an agreement,” Lavrov said.

Lavrov’s interview was followed by a press conference by Armenian Foreign Minister Zohrab Mnatsakanyan who noted that if anyone assumes that authorities may do one thing during negotiations and say another thing to the public, they are deeply mistaken.  Such a thing has never happened and will never happen.

According to him, the approaches in the documents pointed out by Lavrov appeared in 2014 and 2016, and those approaches were not acceptable for the Armenian parties.

“Since 2018, discussions on certain elements have been limited to assessing the parties’ approach to the discussion. The version proposed in 2014 is not a negotiating table document today. We have spoken more than clearly about our positions, where the security component is a priority for the Armenian parties.”

“As for the territories, as mentioned in the commentary, above all else these are part of security zones and defensive lines. In no way can the Armenian side even assume that it is possible to reconsider, endangering the security of the people of Artsakh. Yes, it is impossible to assume that any of the Armenian parties can make concessions that could endanger the security of the people of Artsakh,” Mnatsakanyan said.

These statements of the Minister of Foreign Affairs intensified the topic: Some of the media outlets believed in the Foreign Minister and admitted that the Armenian side did not discuss the issue of handing over the territory, while others shared the opinion that Mnatsakanyan did not speak clearly, and his answer gives rise to different interpretations.

After Mnatsakanyan’s press conference, the Russian Foreign Ministry again touched upon the settlement of the Karabakh conflict, recalling Lavrov’s statement.

The comments of Artsakh officials complemented Zohrabyan’s remarks and underscored “the two highest values for the people of Artsakh – independence and security,” and to which even the most insignificant threats are unacceptable.

Some of the media outlets mainly posted official views of the chairman and vice-chairman of the NA Foreign Relations Committee, the head of the “My Step” faction, the Artsakh NA President, the Foreign Minister, the newly elected President and other figures.

These opinions, in fact, expressed what the Foreign Minister had said, and presented the government’s point of view.

Media.am observed the publications of the first week after the announcement, to find out how the media covered the topic, who they invited on air or from whom they took comments.

Understand and present the government’s point of view

Lragir.am, which actively covered the topic, published a number of analytical articles during the week.

In one of them, the author asks a final question: Mammadyarov did not answer “Mnatsakanyan’s main question: is Azerbaijan ready to discuss the status of Artsakh, even independence?”

In another article on the website, journalist Hakob Badalyan writes that during these developments, the most important thing “happened in Artsakh, where the Defense Army reported that an Azeri reconnaissance drone had been shot down.

…I would like to say that the strike of the Azeri drone is a very concrete response of the Armenian side in the form of a strike, which most likely left its mark on the video conference and the announcement that followed.” 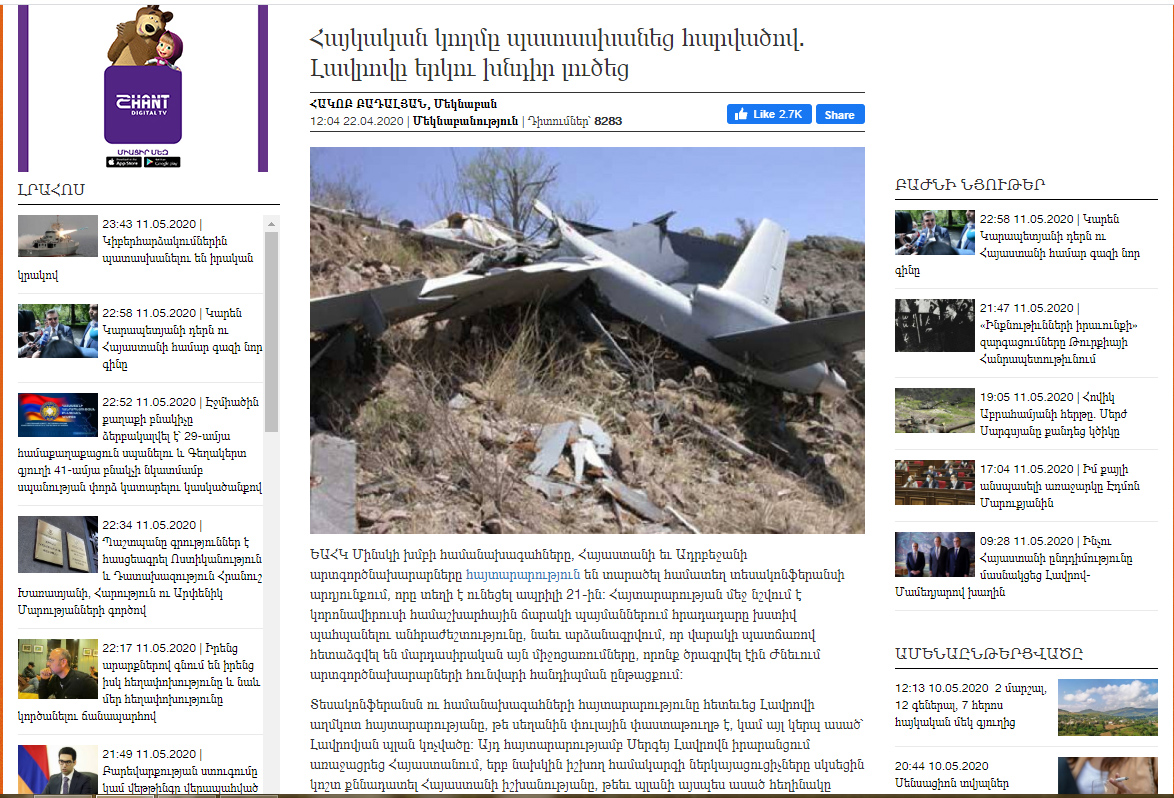 1in.am, which also actively covered the topic, not only presents official opinions but also talks to experts.

In one of the articles, the website interviewed political analyst Ruben Mehrabyan, who said that Lavrov was obsessed with theses that do not suit professionals in an attempt to “fit” it to Armenia’s daily life. “Today, Baku and Moscow are trying to mislead the Armenian side, like market thugs, and mislead the public, as well as to put their words into the mouths of the ‘concerned’ to increase pressure on the Armenian authorities.”

In a conversation with the website, political scientist Stepan Grigoryan expressed the opinion that Lavrov’s statement is connected with Nikol Pashinyan’s person. A person who came to power through a revolution is unacceptable to Russia. The example of Armenia is a danger for authoritarian Russia.

Most of the media outlets tried to ask for comments from various politicians, former and current experts, who had to remind Nikol Pashinyan of the statements made on various occasions and present the view that the authorities were lying.

The Facebook posts of RPA Deputy Chairman Armen Ashotyan about Lavrov’s statement were republished on many websites.

In a post, Ashotyan, citing Nikol Pashinyan’s previous statement and Lavrov’s April 21 statements, demanded an official explanation from Pashinyan and a response to Lavrov’s statements, noting “Enough taking everyone for fools.”

Another post by Ashotyan states, “If Lavrov’s statement does not really correspond to reality, then you must simply deny it in clear, unambiguous language.”

He writes that “…instead of such shocking and fruitless performances, the Armenian society” expects a clear denial or confirmation from the government.”

Hraparak.am, which has published many materials related to the topic, quotes these words of Armen Ashotyan, “North or South, East or West. No one can question the independence of Artsakh, because the people have shed blood for that independence, and the former government has put so much effort and work into the turbulent geopolitical environment, consistently strengthening our negotiating position.”

The topic did not close with all this: The media also connected the visit of the Secretary of the Security Council Armen Grigoryan to Artsakh with the “Lavrov Plan.”

Hraparak.am writes, “Our source claims that Armenia is leaning towards returning the territories as a manifestation of goodwill, and the current government believes that the best time for that is today, in the midst of this chaos of the spread of coronavirus.

And Armen Grigoryan is sent to Artsakh to persuade the NKR authorities to negotiate with them to agree to the implementation of this option.

5tv.am also actively covered the topic. In one of the TV interviews, the guest was political scientist Stepan Danielyan, who expressed the opinion that Russia, waiting for the Artsakh elections and seeing that the Armenian authorities do not inform their people, turned to Armenia. 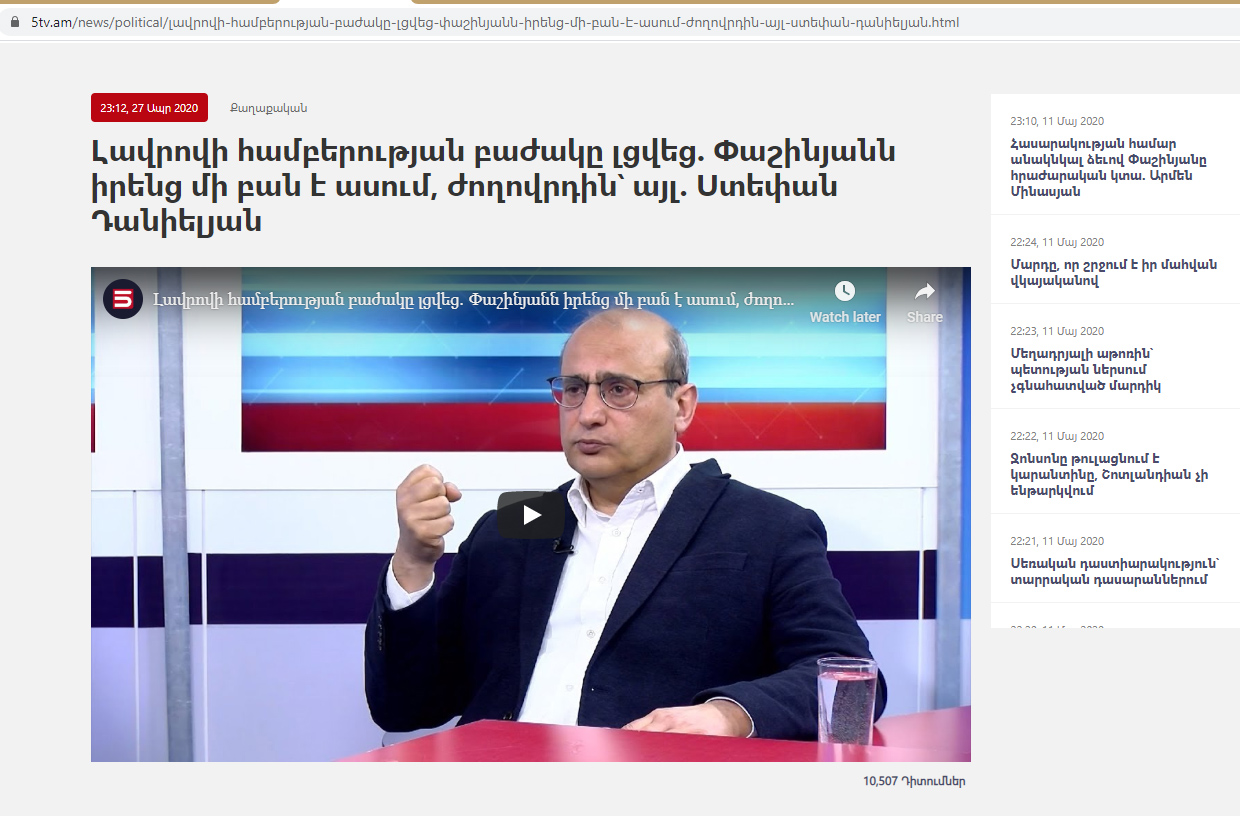 “Azerbaijan’s statement that it is time for the authorities to tell the Armenian people what they are negotiating and prepare for peace is not accidental. This was a slap in the face to the Armenian government,” the political scientist said, adding that “one of the co-chairs could not make such a statement” and “Seeing the contradictory, meaningless behavior of the RA authorities, they decided to open the playing cards.”

In this article of Iravunk.com, the only guarantee of Armenia’s salvation is Robert Kocharyan.

The website quotes psychologist Mihrdat Madatyan’s opinion, “What happened that Russia, which has been pro-Armenian for decades, became pro-Azerbaijani? Isn’t this the logical continuation of our pro-Azerbaijani Nikol Pashinyan’s loud claims?” He says and concludes that Putin is asking Pashinyan to reconsider his approach to his friend Robert Kocharyan, and the latter, out of personal revenge, “boldly” rejects and starts an illegal process against Kocharyan, putting pressure on the judiciary, justice and morality in general.”

Lavrov’s statement was in the media spotlight in early May. The practice of presenting the topic with extreme emphasis and the media groups using this practice remained largely unchanged.