According to Freedom House, Armenia Is Among The Countries With Free Internet 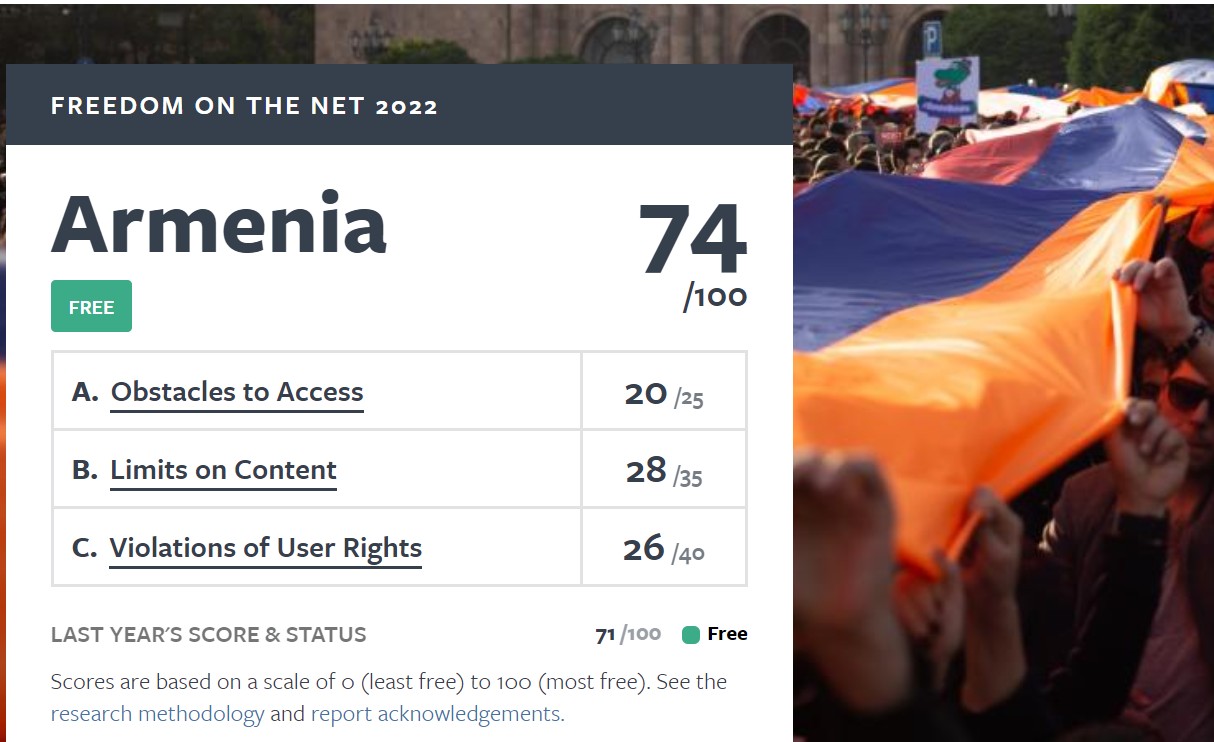 The international human rights organization Freedom House published the annual report “Countering the Authoritarian Overhaul of the Internet,” according to which Armenia is among those countries which are free.

Armenia received 74 points (out of a possible 100), last year the points were 71. Which corresponds to the range of free countries. Internet accessibility, content restrictions, and user rights violations are taken into account.

* The removal of restrictions on the circulation of information, which were applied in previous years during the Armenian-Azerbaijani armed conflict in Nagorno-Karabakh,

* Fewer cyber-attacks on the media,

* The repeal of the article criminalizing grave offenses (which was made possible by the influence of the local and international civil sector on the government).

The report states that Armenia is in a transition phase when the entrenched old political elite is being pushed out. And there are problems: systemic corruption, non-transparent politics, flawed electoral system, and weak rule of law.

Among the risks are political interference in the judicial system and the hostile rhetoric of government officials towards the media.

Armenia continues to be seriously affected by the conflict with Azerbaijan in 2020 (it is specifically mentioned that the report was completed before September 2022, when the Azerbaijani armed forces had started attacks on Armenian territories).

Internet access is an important criterion for Freedom House. Internet connection in Armenia, especially public Wi-Fi, is available, and affordable and the speed is improving (although the situation in the capital is better than in the regions).

According to the 2020 World Bank survey, 96% of households in Armenia had access to the Internet.

The serious problem is that the Internet providers operating in Armenia have connection restrictions to Armenia and outside of Armenia, which is a serious challenge to ensure an uninterrupted Internet connection. For example, when fiber optic cables are damaged (mainly these networks pass through Georgia, but there are also backup networks through Iran), subscribers are deprived of the Internet, which negatively affects the quality of Internet connection throughout the country.

Internet outages and blocking of social media platforms are not common phenomena in Armenia.

The report says that in general, content protected by international human rights standards is not blocked.

Since October 2020, a number of Turkish and Azerbaijani media and government resources were unavailable in the .az and .tr domains. And so, it was for several months.

There were also restrictions on accessing TikTok, but neither the providers nor the state confirmed the information about the blocks.

Due to the pandemic, there were later demands to remove publications due to the military situation.

During the state of emergency, the authorities demanded the removal of 401 publications, 196 in the media, and 205 from social networks. 3 news websites, which the police did not publicly present, were fined 700 thousand AMD. There were also cases when the police ordered people to remove content related to the conflict.

The report says that online journalists, commentators and ordinary users do not self-censor what they say on a widespread basis.

According to IREX, some online journalists are wary of writing negative things about their media owners or benefactors.

Azerbaijan is a sensitive topic.

In a highly polarized field, Pashinyan’s government “friends” who are active civil society members in Armenia are sometimes reluctant to speak online for fear of being identified with members or sympathizers of the old regime.

According to Freedom House, the online information landscape in Armenia is polarized, subject to political pressure, and full of misinformation.

In some media, online journalists are prohibited from deviating from their employers’ editorial policies, which are often tied to political parties or forces.

Anna Hakobyan, the wife of Prime Minister Pashinyan, who is the editor-in-chief of “Haykakan Zhamanak” and has privileged access to information, is perceived as controversial.

Despite these concerns, some analysts argue that under Pashinyan, undue political influence on the online information field is less prevalent than it was in the past.

Both ruling and opposition political forces accuse each other of maintaining an army of fake user accounts.

In February 2021, Twitter announced that it had removed 35 accounts associated with the Armenian government that was spreading anti-Azerbaijani narratives. In some cases, the fake accounts posed as Azerbaijani politicians and newsmen.

Although the information field is very diverse (there are both neutral news and oppositional views), according to IREX, “the quality of information is often low, and therefore does not provide real diversity.”

In 2020, during the armed conflict between Armenia and Azerbaijan in Nagorno-Karabakh, the government hid information from the front line, which contributed to the spread of misinformation and reduced public trust in information from official sources.

It is positive that activists and protest movements rely on social media to mobilize citizens and gather supporters.

The Constitution of Armenia guarantees freedom of speech for individuals and the media, and criminal law provides some protection to journalists. Obstructing the legal professional activity of a journalist, and forcing a journalist to disseminate or conceal information is punishable by a fine or imprisonment for a maximum period of one year.

However, neither the criminal code nor media legislation clearly defines who qualifies as a journalist, or whether these rights extend to online journalists and bloggers.

Armenia’s judicial system lacks independence and is one of the most unreliable public institutions. This fact does not allow disputes to be brought and resolved in court.

The bill criminalizing defamation and insult, which was adopted in July 2021, had a bad impact on Armenia’s index. It operated for a year, allowing users to be held accountable for criticism of government officials and public figures (especially Prime Minister Pashinyan).

As of April 2022, at least 802 cases were initiated under this article, 6 of which were found guilty. The basis of the eight criminal cases that reached the court was insulting Pashinyan with Facebook posts or comments.

Local and international civil society groups jointly condemned the law, persuading the government to repeal it. As a result, that provision was not included in the new Criminal Code that entered into force in July 2022.

The report says that incidents of bullying or physical violence for online activities have decreased since the Velvet Revolution.

In 2021, it recorded 18 cases of physical violence against journalists (offline and online) and 108 cases when they were pressured in other ways.

Armenia is in the same position as the USA in terms of Internet freedom indicators. And according to the Freedom House report published half a year ago, Armenia has retreated in the field of free media.