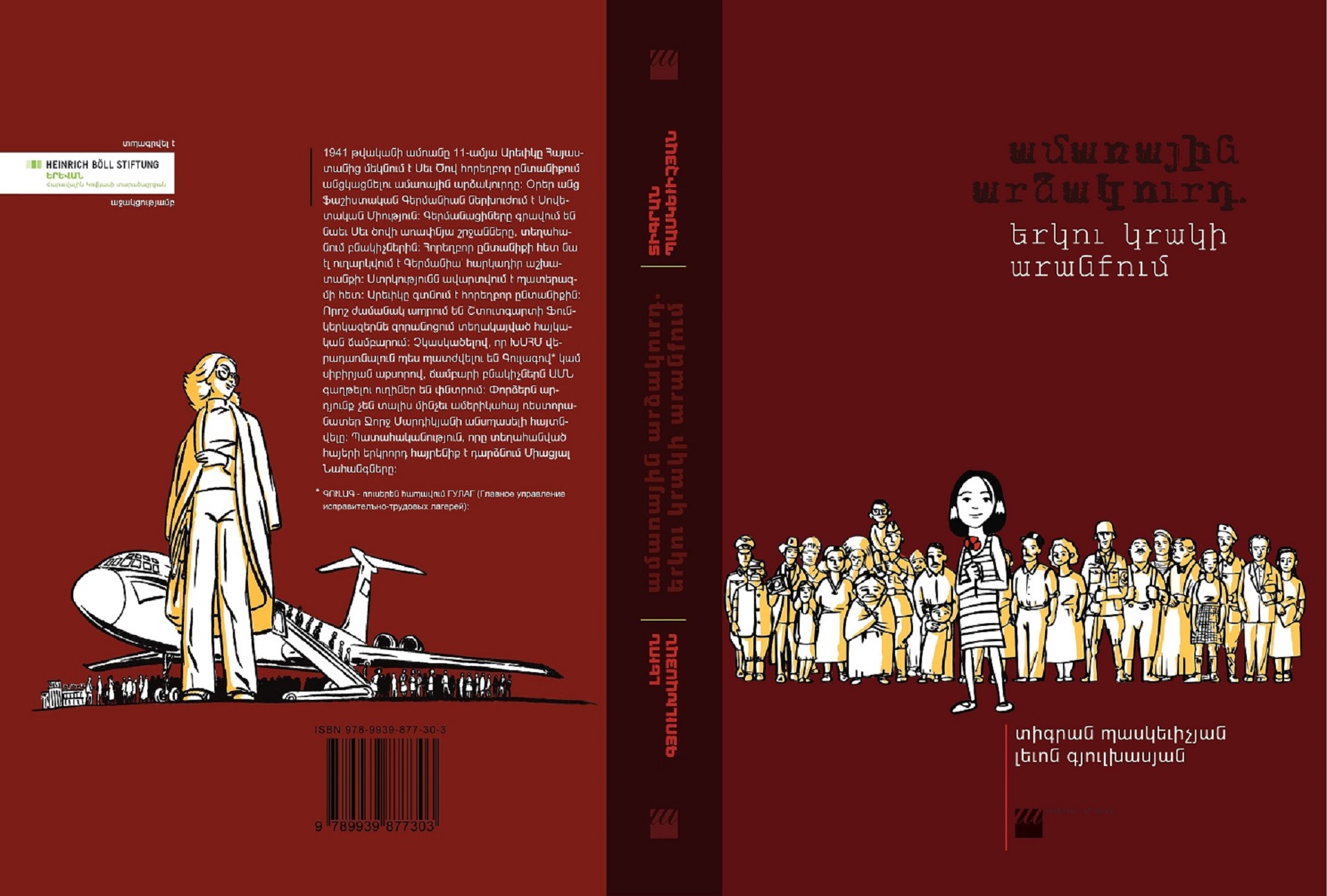 The illustration (or graphic novel) “Summer Vacation։ Between Two Flames” can be considered the first Armenian product in this unique and very important printing genre. The work of Levon Gulkhasyan (illustration) and Tigran Paskevichyan (writer) is completely Armenian-themed and Armenian-produced. Before that, even if the topic was related to a part of Armenian history, it was either a joint production or a purely foreign project (mainly French).

This is a story that swings very interestingly between the realms of fact and fiction. The life of Arevik, a 14-year-old from Yerevan, who during the Second World War and the years following it, goes through a path full of deprivation, horror, and humiliation, crossing countries, and continents and facing the most complex existential situations, is placed in a big context.

After all, this is also a coming-of-age story. A coming of age experienced by a teenager, unwittingly immersing herself in the great political game, feeling on her skin what war really is and how the cold war works in all its ramifications.

Soviet Armenia, Soviet Russia, Nazi Germany, post-war German Armenian camp, USA, Armenia again. This is how screenwriter Tigran Paskevichyan throws his hero into such a cycle, for whom Arevik is a collective figure.

Tigran Paskevichyan has been making films for years, collecting oral testimonies and film archives, and preparing the basis for exhibitions about how displaced people and prisoners of war lived and survived during the Soviet years.

And now an iconostasis was built from this enormous material. A genre that is very popular in the world primarily due to its flexibility.

The structure of the plot is primary in graphic novels, but it is maximally concise in its verbal description. Words always give way to images if it has even one chance of not being written.

In general, although the illustration is a book, it works with the logic of cinema, because the dialogues and at least the author’s text are not voiced, but shown.

“Summer Vacation: Between Two Flames” is super-professionally done in that regard. It glides easily over the most complex problems, leaving a complete impression.

The artist Levon Gulkhasyan used black and white coloring and a restrained linear style, which conveys the impact of the memory well. And the certain incompleteness of the outlines leaves room for the reader to think about how fragile and fluid memory itself is.

Imagery, visualizing the material, having a fantastic or ultra-documentary basis, immediately immerses the reader in the environment (just like a movie) and gives the key codes that enrich the story.

Let’s say, if you need to make the era visible (with clothes, infrastructure, street signs, documents, types of weapons, etc.), then a sequence of several frames is quite enough to “see” the time. Image distribution follows the script, trying to get rid of word patterns.

Some things are impressive as an image. For example, in this case, maps (about the course of military operations), documents (instructions and orders about what the displaced people should do and what they have the right to take with them), photos (there are also archival photos at the end of the book).

And all that makes “Summer Vacation…” a multi-layered visual story.

So, just as cross-references work in digital texts, here too it is suggested to delve into history as much as necessary. It is worth remembering that much of the Soviet policy or Nazi strategy is unfamiliar to a younger audience. They can learn about it from various visual applications.

“Summer Vacation…” is a classic graphic novel with a rhythm of general and close-up shots, character development and concise delivery of historical material.

The compact format is actually very attractive. If such a novel were written only in words, it would be approximately three times larger in volume. In other words, the reading would be longer, and the emotional impact would remain either the same or even less.

Visual storytelling conveys more information in less time and has a greater impact on the senses.

This is more appreciated when the texture of the plot is documentary, and the characters are fictional. In that case, feelings and emotions gain documentary value.

Human emotions are always inseparable from the story. It can even be said that emotions make history visible.

And Arevik, undergoing captivity, hunger, loss, forced hard work, and constant fear, faces an ever-present question: what can you do when the world you know collapses and you have to try to remain human when it is almost impossible? 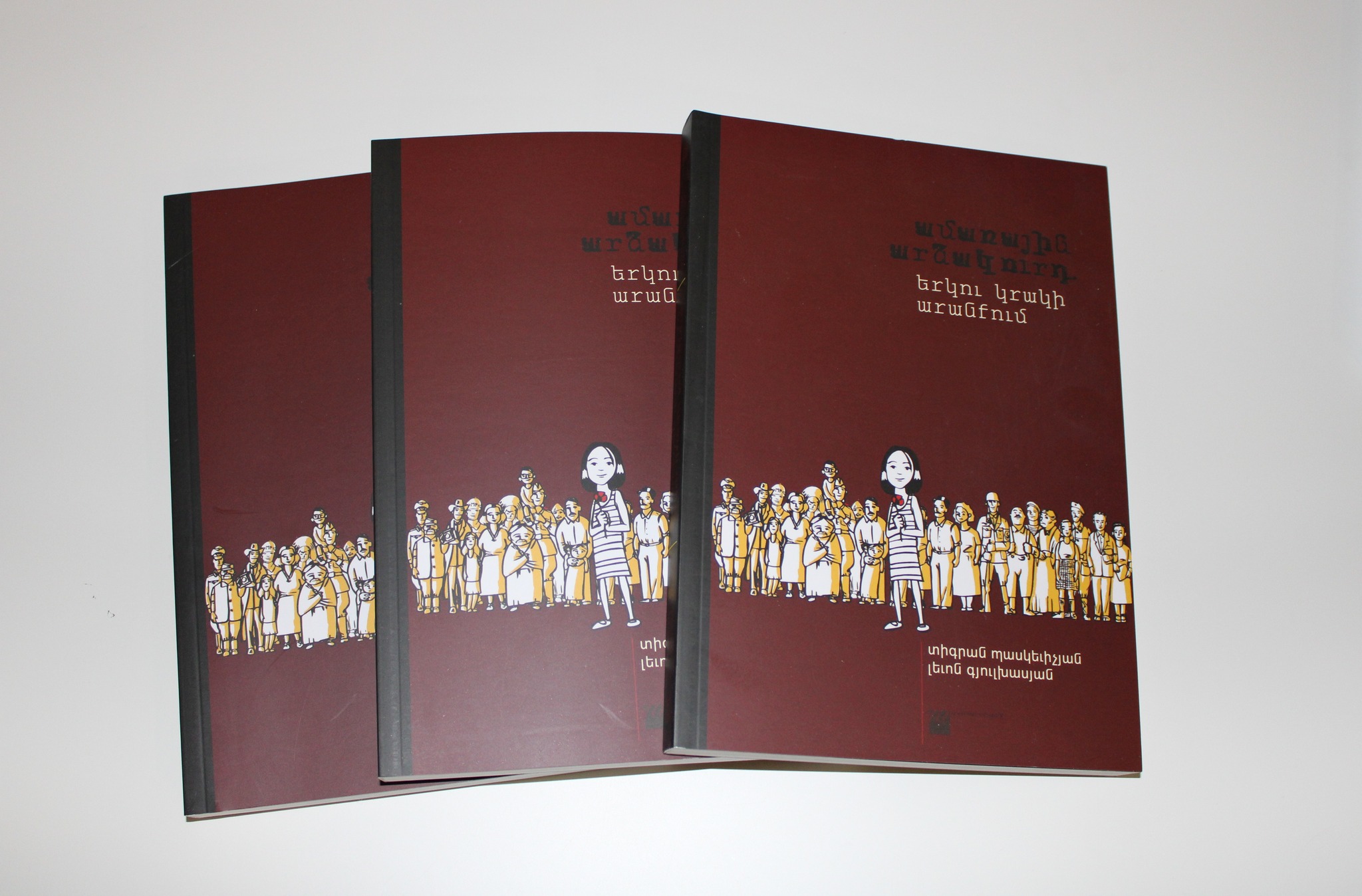 The visual story of “Summer Vacation: Between Two Flames” would hardly have been born if there were no supporters (in this case, European institutions). Such works are costly, but they allow us to speak on behalf of our own country and in our own language.