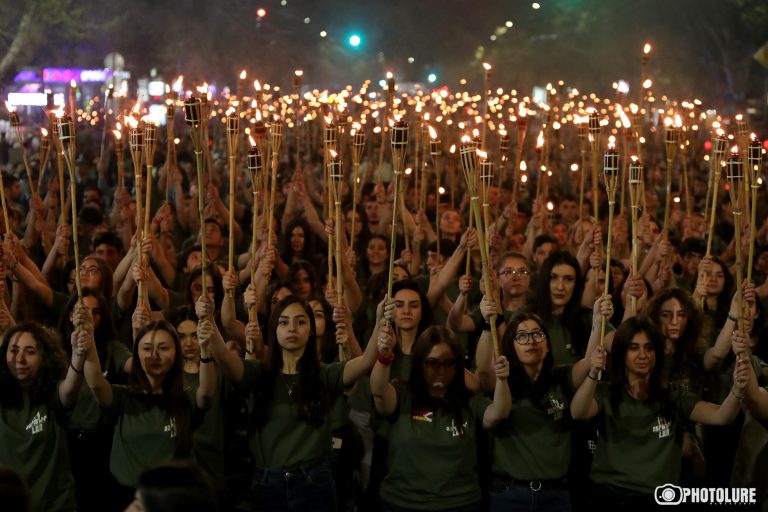 The news service of Public Television did not cover the traditional torchlight procession on the eve of the Armenian Genocide commemoration on the evening edition of their main news program “Lurer.”

The march on April 23 is an annual ceremony organized by the Youth Union of the Armenian Revolutionary Federation (ARF) together with the Nikol Aghbalyan Student Union.

However, this is not important, the march has not been identified with the ARF for a long time, but has acquired the nature of a mass public event.

This year it took place on Saturday. Lusine Barseghyan, the editor of Public News, told Media.am that they had a problem and covered the event on April 25.

The written explanation of the TV company mentions that there was no reference to the march due to the scarcity of human resources.

“The events to be covered on Channel 1’s news site are planned according to the workload of the film crews. The march was not covered due to a lack of human resources, as on the weekend (April 23) the news service was partially overloaded. However, on April 25, during the News broadcasts, there was a report related to the march,” Public Television said.

The report was aired on a non-main news program (it can be watched from 22:25). The torchlight procession was presented among the commemorative events held yesterday. In particular, a torchlight procession was held, the participants burned the flags of Turkey and Azerbaijan, Mozart’s “Requiem” performed by the Philharmonic Orchestra and the National Academic Choir was performed at the Tsitsernakaberd Memorial, etc. The report talks about the march for about 7 seconds.

The TV company did not mention that it was more crowded than in previous years, former presidents of Armenia Robert Kocharyan and Serzh Sargsyan also participated. There are almost no shots from the actual march, no direct quotes are used.

In the past years, as a rule, Public Television has always covered the march with a separate report.

And in 2022 they decided that there is no need to do that because on weekends human and technical resources are only partially involved in creating news.