The Coverage Of Pro-Russian And Anti-War Rallies In Yerevan 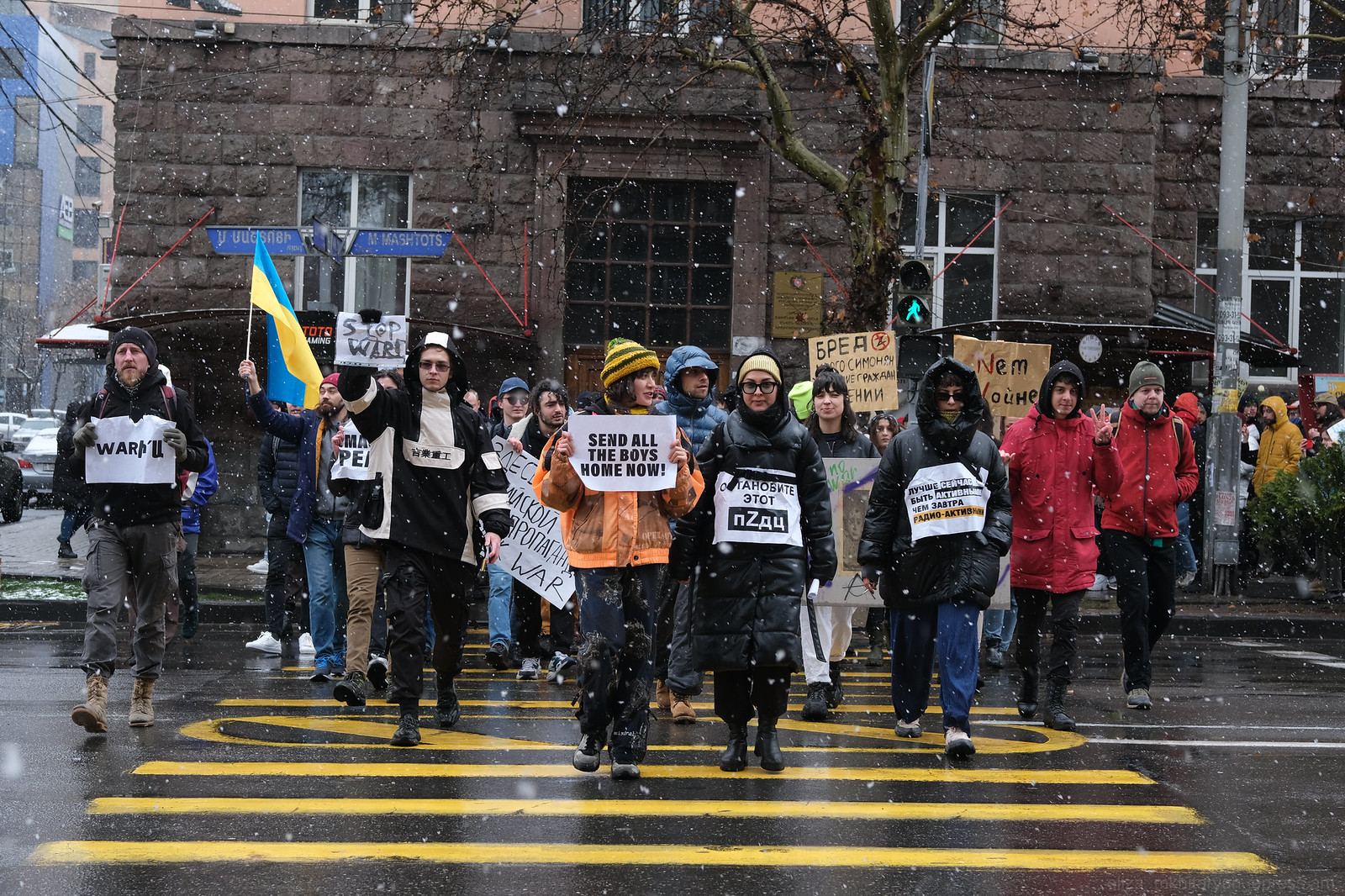 On March 19 and 20, several protests on the subject of the Russian-Ukrainian war took place in Yerevan. Basic monitoring of broadcasts and online media revealed that the Armenian media covered the demonstrations in support of Russia more than the rallies in solidarity with Ukraine.

The rally that took place on March 19 was in support of Russia with protesters using slogans of the struggle against fascism. Participants gathered near the Shahumyan statue with drums, Russian and Armenian flags, and posters with the letters “Z” and “V,” symbols of the Russian operation in Ukraine, and then marched towards the Russian Embassy.

There were two rallies in support of Ukraine and against the war on March 20. One was mainly with the participation of foreigners who have settled in Yerevan recently, chanting anti-war statements such as, “No to war,” “Putin, stop the war,” “War is dangerous to health,” “People are more important than ideas,” “Glory to Ukraine,” “Say no to war” and other messages. The participants of the rally walked in the central streets of Yerevan and at the end chanted “Thank you.”

The other rally took place near the statue of Taras Shevchenko on the initiative of the representatives of the Ukrainian community of Armenia, as well as public and political forces. The demonstrators expressed their solidarity with the people of Ukraine using slogans such as, “We stand by Ukraine,” “For our and your freedom,” “Stop the war” and others.

The demonstrations that took place over the course of these two days did not particularly stand out for their level of engagement, or for the involvement of a large number of people.

TV channels ignored rallies in solidarity with Ukraine, and not everyone covered the “Z” rally

The Russian-Ukrainian war is broadcast on Armenian air mainly via international news, and the use of Russian sources predominates.

There was no report or reference to the rally in support of Ukraine or the rally against war on TV, only Kentron TV used a small portion of Factor TV’s live broadcast in their news section of their website.

The rally in support of Russia’s actions in Ukraine was covered by Channel 5, Armenia, and H2 TV. If the H2 TV channel broadcast the event live, then Armenia and Channel 5 prepared reportages using the speeches of the organizers, giving journalistic formulations to the main ideas. They talked to the protesters and emphasized their wishes for friendship with Russia and the Russian people.

H2 TV channel continued the topic in the format of a conversation between journalist, Shavarsh Gevorgyan and one of the organizers of the rally, Hayk Babukhanyan. The reports also emphasized that such rallies will be recurring in nature, once a week.

Public Television, Kentron, Yerkir Media, Shant, FreeNews, and New Armenia did not cover any of these demonstrations.

The demonstrations were covered live in online media, with the rallies in support of Russia being covered on a larger scale

Only one of the two rallies in support of Ukraine in the ongoing war was covered live. The coverage of the march in the streets of Yerevan was provided by Factor TV, the live broadcast of which was used by some websites in reference to the rally. Video and photo series were also prepared by epress.am.

Factor TV was broadcast live by mamul.am, the news website belonging to Kentron TV, while newsleader.am and InfoPort.am mainly presented photos of the other anti-war rally in solidarity with the Ukrainian people, which took place near the statue of Taras Shevchenko.

The march in support of Russia was also covered mainly live. The event was broadcast in full by 24News.am, which was used by other online media outlets: A1+, Shabat.am, armpublic.com and others.

The Russian rally was covered on Aravot and Hraparak websites with its own journalistic eye, including text and photos. Moreover, Aravot used the description of a special operation. Infoport.am also wrote a separate article about this demonstration.

The regional JamNews.net platform covered the topic in a little more detail, noting that a rally was held in support of Russia, which was attended by pro-Russian politicians with little public support․ “It did not attract much attention here, but it aroused interest outside the country.”

Videos and photos without journalistic commentary

These demonstrations in support of Russia and Ukraine were mostly not commented on by journalists, either they were covered live or, at best, with quotations of a few people who took part in the rally.

Later the topic was not further developed, it was not commented on by other specialists or political figures.