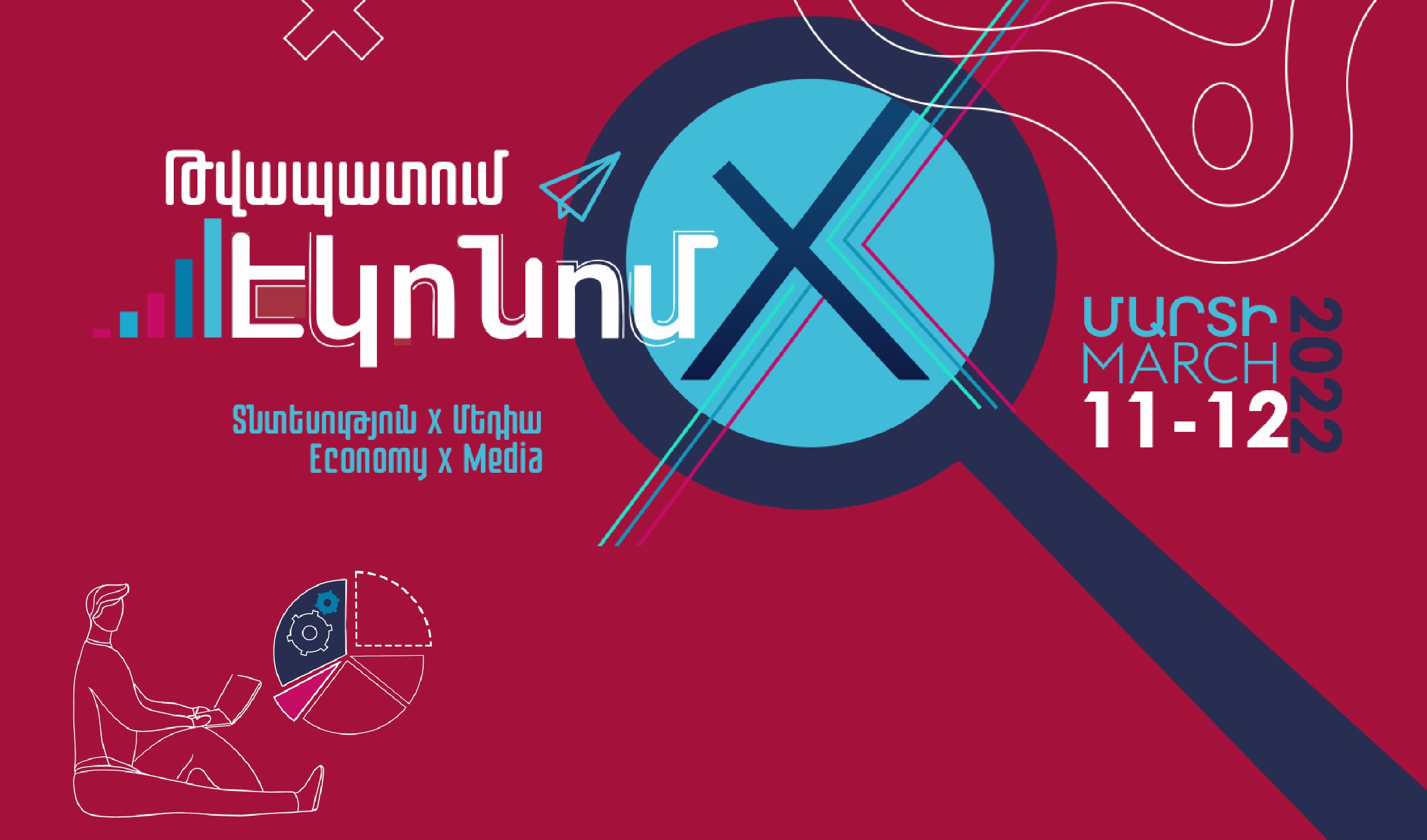 The DigiStory (Tvapatum) media conference once again united journalists and content creators. The event, held on March 11-12 in a hybrid format (online and offline), is the seventh one to take place. This time the conference focused on economic journalism and media management. 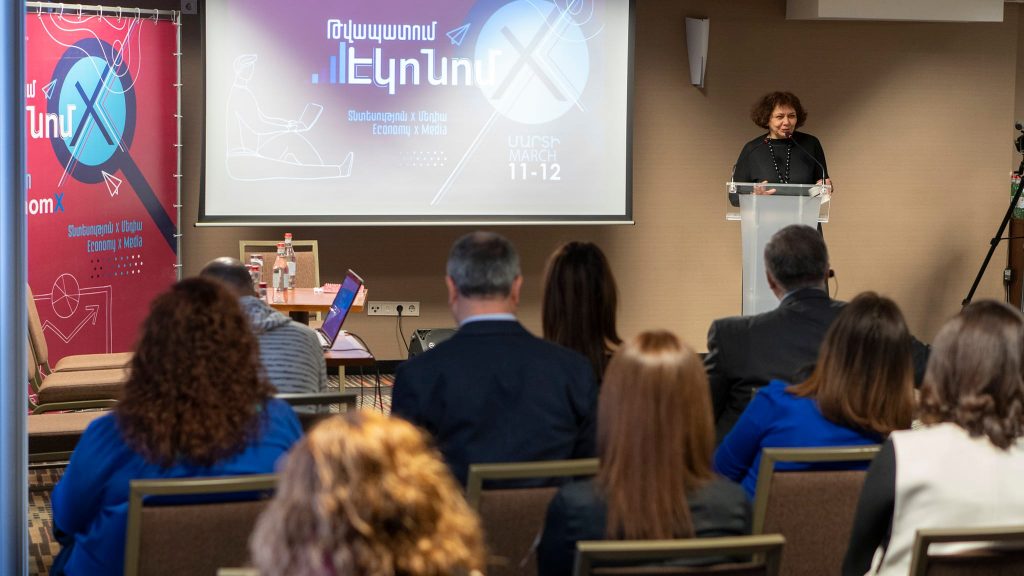 The first discussion was about the general ideas of economic journalism in Armenia, which was attended by Karen Harutyunyan (Civilnet), Ara Tadevosyan (Mediamax), and Sargis Harutyunyan (RFL/RE). All three singled out the insufficient education provided by Armenian universities as the main problem. “They do not train specialists in specific areas,” said Karen Harutyunyan. 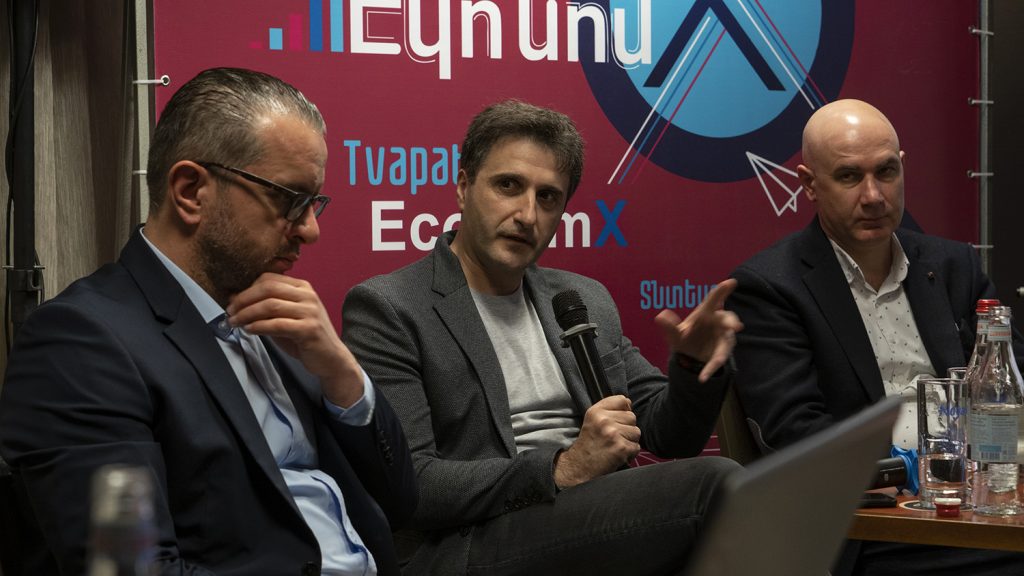 According to RFL/RE (Azatutyun) journalist Sargis Harutyunyan, Armenian society is not so interested in the economy and it is difficult to present this specific field to people in such a way that interest arises. “After the collapse of the Soviet Union, a large middle class was not formed in Armenia, which would not only be interested in the economic situation but would have a direct participation in it, would buy shares, would be aware of exchange rates and so on.”

The journalists spoke about their experiences with different businesses, coming to the conclusion that there are, in general, big communication problems. They exist both with established and developed banking systems, as well as with individual businessmen. The speakers do not rule out that the reasons for that bad communication may also be the result of timely cooperation with unscrupulous media.

The role of the journalist in the economic sphere

The economy is directly related to the quality of human life and in crisis situations, it becomes extremely vulnerable. Taking into account the new reality brought by the epidemic from 2020 and the Russian-Ukrainian war in February, the economy is undergoing multiple deformations.

As Margarita Lyutova, a journalist of the already blocked Russian Dozhd (Дождь), says, economic journalism becomes relevant only in difficult moments. Lyutova divides economic news by importance and areas: The first is information about personal finances that people are most interested in, the second is government regulations, the third is information about macroeconomics and markets, which tells the reader what is happening and what are the forecasts, and the last is economics as a science. 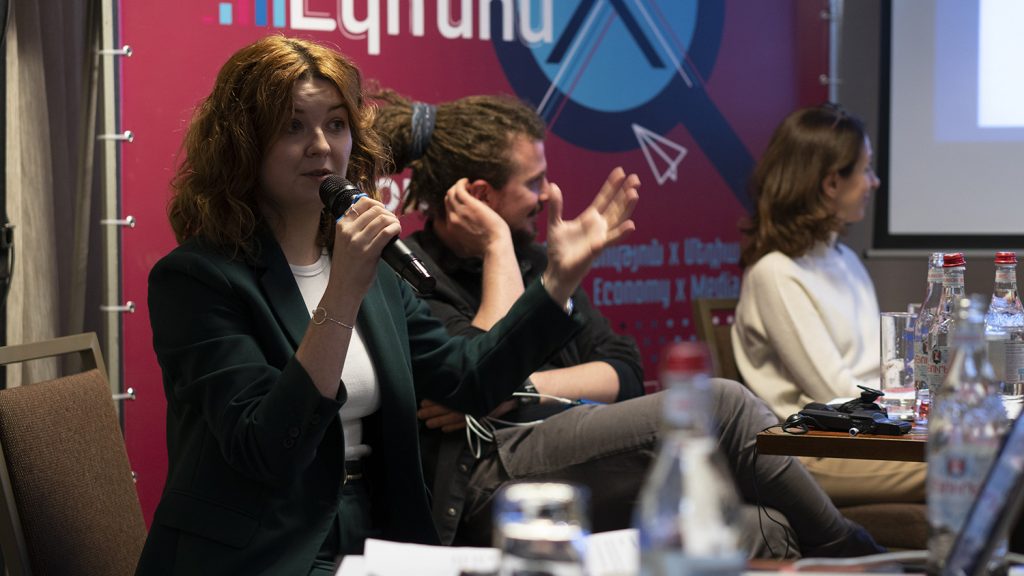 Today’s global situation forces journalists to orient themselves quickly, setting information priorities for the public. Margarita Antidze, the editor of the Tribune.com news website and GIPA lecturer, says it is difficult not to link the economy with politics. “Russia and Ukraine are the main economic partners of the post-Soviet countries and the effects of the sanctions on Russia were inevitable and are already being felt by us. Prices will rise, there will be inflation. In Georgia, people are rushing to buy sugar, but Georgia does not import sugar from either Ukraine or Russia. Journalists must help people to get the right information in such situations and not to make their actions cause an artificial deficit.”

Explanatory journalism is one of the best ways to talk about complicated things, and the economy is quite multi-layered and easily manipulated to cover without an explanatory component.

“The most important questions in explanatory journalism are whys and hows? It is impossible to explain anything without them. If I know that there are sanctions on Russia, but I do not know why and I do not know what effects they will have, I cannot explain the phenomenon. And there is no need to put facts and data together without context,” said George Gogua, editor-in-chief of Mediachecker.ge and founder of Project 64.

In the conditions of few sources of information in Armenia, especially when most of the state agencies have limited their contacts with the media, journalists face a number of problems.

Hetq journalist Seda Hergnyan says that very often the work of journalists fails due to the non-operative work of the departments: If the inquiries are answered late, the material becomes obsolete. “Today, when we make a comparison, we have to take the data of one year earlier than necessary, 2020, because the databases of the previous year, 2021, have not been updated yet.”

The language of economy is mostly numbers, and when there are many of them, difficulties often arise. According to Arminfo journalist Narine Badalyan, when writing articles in large numbers, they almost know that many people will not read that article, and the readers will be a specific focus group of interested and informed people. Then the work becomes easier. 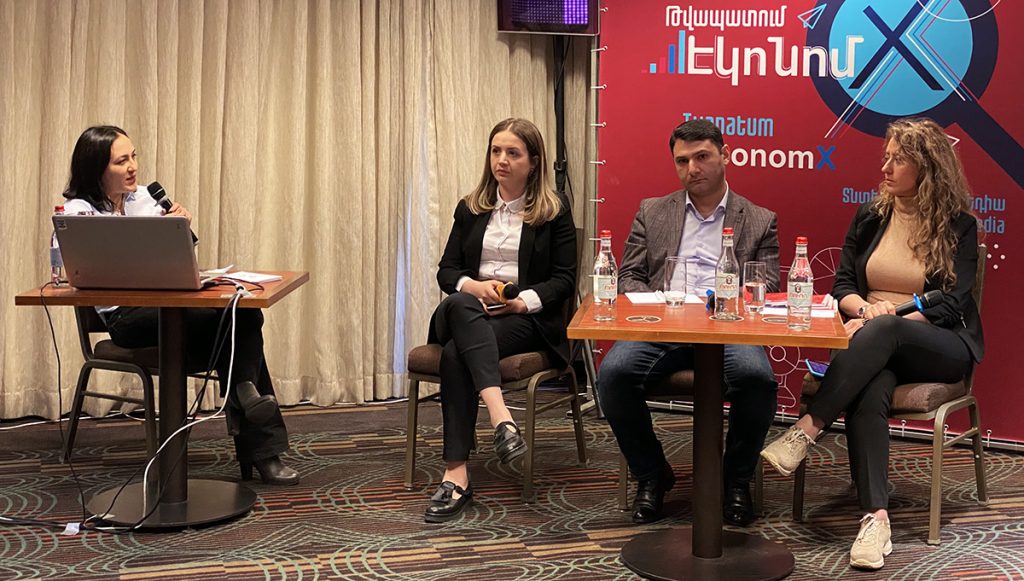 “In the case of many numbers, there is a great temptation to involve everyone, not to miss anything. It is desirable to look at the data through the eyes of the reader, in order to assess as accurately as possible what a person may need and worry about. According to that, data filters are formed,” said Hergnyan.

Simple infographics save the situation, make the material easier to digest and remember, but working with them has its nuances. “Choosing the wrong visuals can be very confusing and even manipulative, and it is not only about the media, but also the departments,” said Haykaz Fanyan, an economist and head of the ACSES think tank.

According to Fanyan, a representative of the expert community, economic journalism in Armenia can develop in the event of the establishment and stabilization of private media.

During times of war, the work of the media becomes very complicated: In the case of force majeure, it is necessary to provide information, solve security issues, and have sufficient financial means to organize all that. The Ukrainian media are facing such challenges.

“At the moment we have two big problems. The first is the safe operation of the media: It is difficult for journalists who have not covered war to adapt to the new field, status and situation. The second problem is financial: There are no advertising sources, your main supporters are losing their jobs, they have a security problem,” said Jakub Parusinski, financial director of the Kyiv Independent. To this end, on February 25, the Ukrainian media donation page was launched, which has already raised more than $1.1 million. 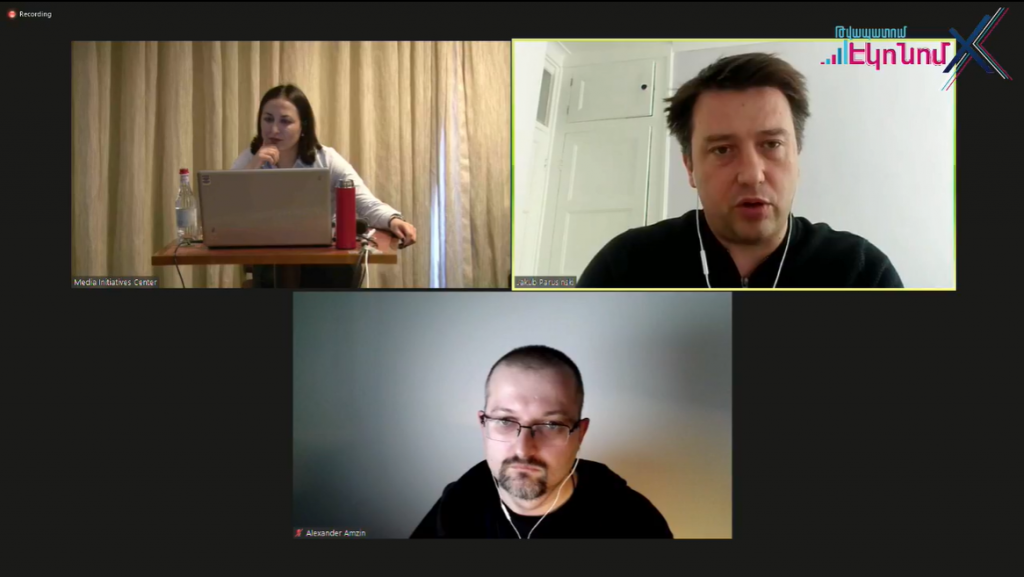 It is accepted in the West that the financial means of independent media are formed from the subscriptions and donations of readers. According to Parusinski, leading international media outlets such as the New York Times are recording their best results in the new decade, having millions of subscribers. The media of post-Soviet countries have just begun to introduce the method of involving the reader, but the results are promising.

“Last year there was one subscriber media outlet in Ukraine, this year their number has reached 12-15. The same thing is happening in Belarus and Moldova. With small steps, donations are stabilizing and growing,” said Jakub Parusinski.

The economy in different formats

Talking about the economy becomes more difficult when only voice is used. NPR’s “Planet Money” podcast host Robert Smith says it’s not terrifying if the listener is not burdened with basic issues and numbers.

“We do not have the opportunity to talk about long numbers or show graphs in podcasts, so we have chosen a creative means of telling stories about the economy. For example, to talk about rising apartment prices in Miami, we found an opera singer and used her voice to show how much prices have gone up,” said Smith.

According to him, they make economic topics interesting, fun, joyful, and also exciting. Today their competition is not with traditional media, they position themselves and compete with Netflix and film production in general. 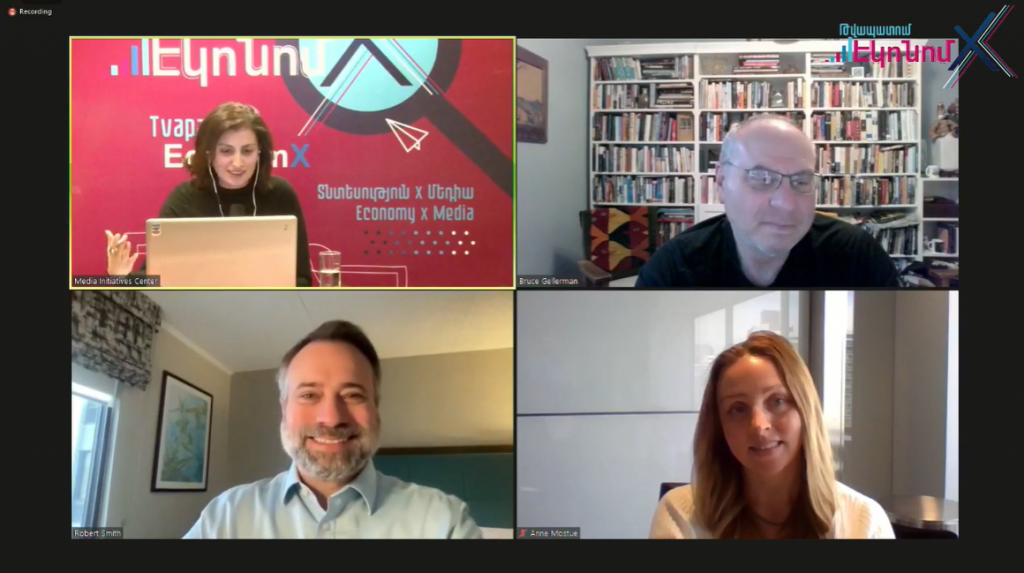 Boston Public Radio senior journalist Bruce Gellerman also highlights the choice of topic. According to him, there is no need for a script and story transcript, but there is a certain context around which the story is built. “I will not present many numbers to present the situation in detail, I will focus on the story of a family.”

Bloomberg correspondent Anne Mostue says that it is difficult to write about the economy sitting in the office, you have to go out on the street. Remembering the first days of COVID-19, she said, “You can’t influence people without showing the reality, the reality of where people are treated. And it may take days or even months to get permission to tell stories from the inside.”

Mostue says that there is a lot to be said about the economy now, especially since inflation has become a serious threat to the world, and it requires more serious attention from journalists than the Coronavirus crisis.