Criticism Of The Western Media 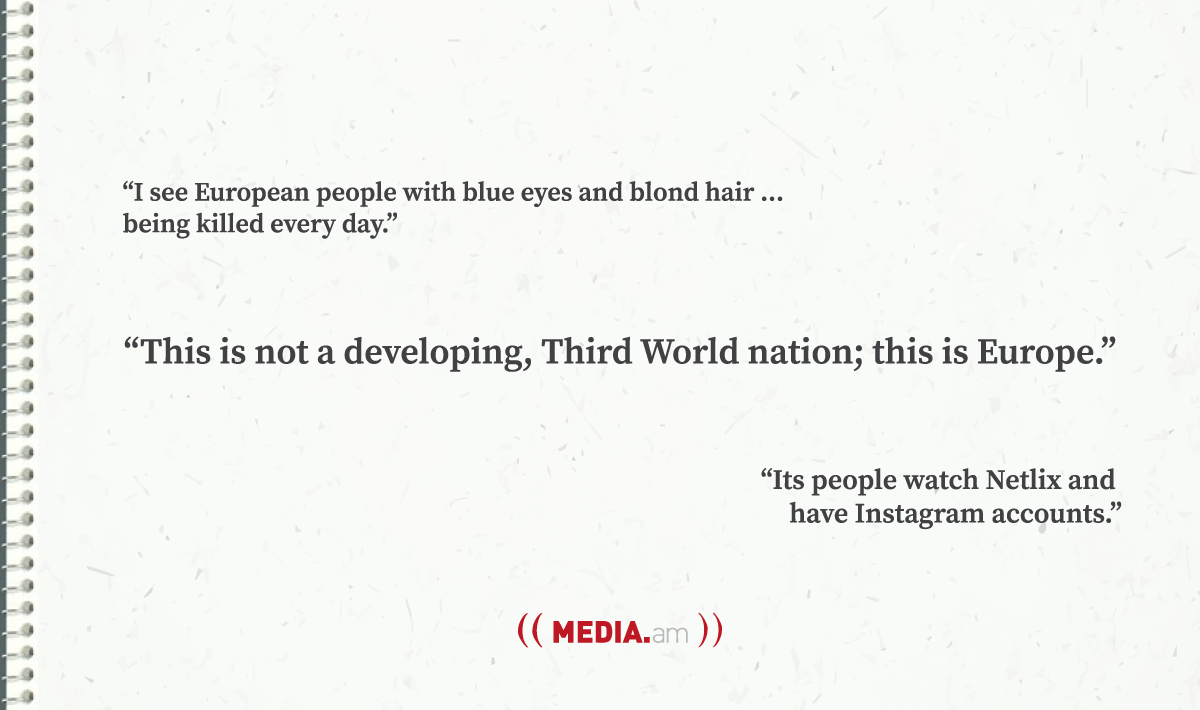 It is already a week that the world is watching the Russian-Ukrainian war. Many predict the beginning of World War III, some rumor about a major economic crisis in our region. Along with all this, new concerns arose, which are more in the field of ethics.

It all started when the issue of the residence of Ukrainian refugees who left their homes and sought refuge in neighboring countries, particularly in Poland, became a priority on the agenda for Europe. The coverage of these cases stood out for the language used by Western experts and officials, as well as journalists from a number of exemplary European and American media outlets, which Internet users described as highly racist and xenophobic, especially towards the peoples of Africa and the Middle East.

The first among such comments is the quote of the British The Telegraph expert Daniel Hannan. 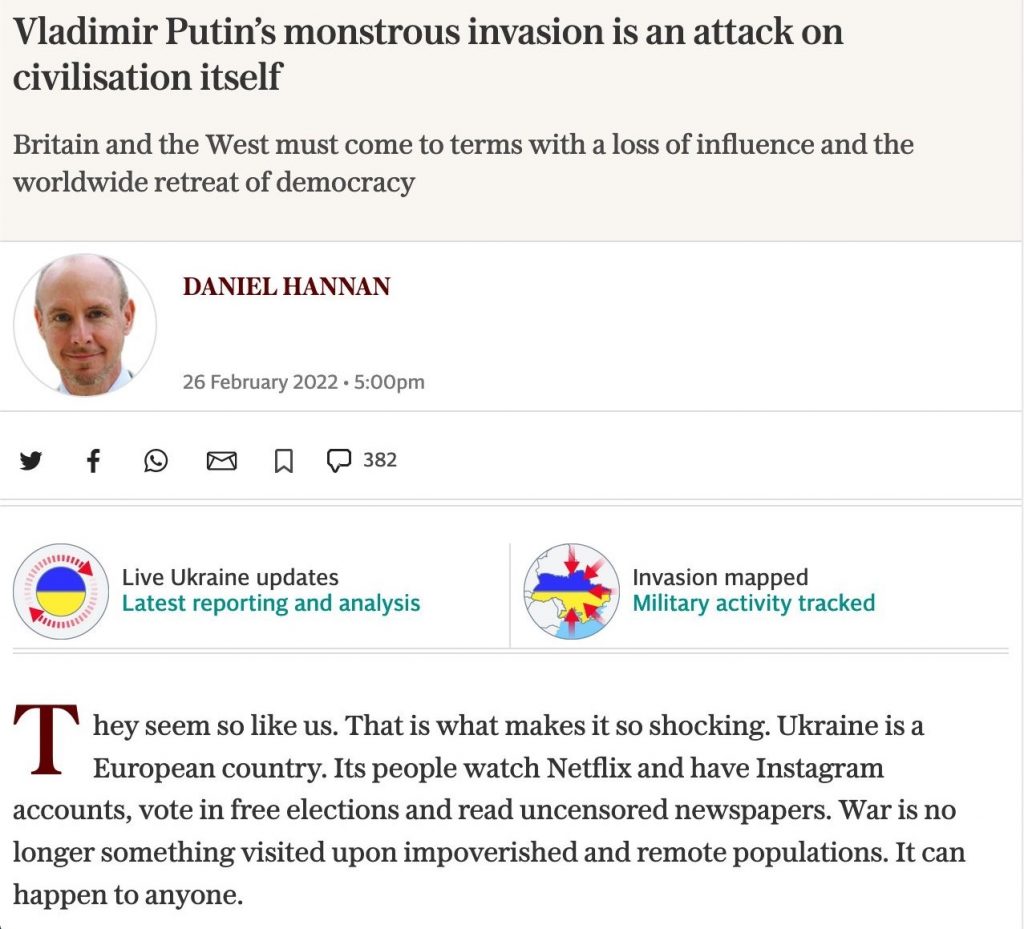 “They seem so like us. That is what makes it so shocking. Ukraine is a European country. Its people watch Netflix and have Instagram accounts, vote in free elections and read uncensored newspapers. War is no longer something visited upon impoverished and remote populations. It can happen to anyone.”

While “Watching Netflix” became a dark joke on Twitter, with comments like “I also watch Netflix, worry about my life too,” the media commentary about the refugees increased.

Charlie D’Agata, a foreign correspondent for the American CBS TV channel, who joined his colleagues in the studio, said about Ukraine. “This isn’t a place, with all due respect, like Iraq or Afghanistan that has seen conflict raging for decades. You know, this is a relatively civilized, relatively European – I have to choose those words carefully too – city, where you wouldn’t expect that or hope that it’s going to happen.”

“These people are white”

This was not the only time that CBS allowed for such coverage. This time the channel’s correspondent working at the Polish border stood out․ “To put it bluntly, these are not refugees from Syria, these are refugees from neighboring Ukraine… These are Christians, they’re white, they’re very similar to people who live in Poland.”

The journalists who hosted the French BFM channel were especially criticized, of which Ulysse Gosset said, “We are in the 21st century, we are in a European city and we have cruise missile fire as though we were in Iraq or Afghanistan, can you imagine?” Philippe Corbé compared the Ukrainian refugees to the Syrians, saying that at the moment it is not about Syrians fleeing the bombardments of the Syrian regime supported by Vladimir Putin. We’re talking about Europeans driving off in their cars that look like our cars, hitting the road and trying to save their lives. And that is a question that will be important for Europe.

Among the examples spread on the Internet is the British ITV reporter, who excitedly said, “Now the unthinkable has happened to them․․․ This is not a developing, third-world nation, this is Europe!”

ITV: “This is not a third world nation, this is Europe”. pic.twitter.com/q3L8HxXand

The host of the Qatari Al-Jazeera TV channel also used almost the same vocabulary, “What’s compelling is just looking at them, the way that they’re dressed, these are prosperous, middle-class people. These are not obviously refugees trying to get away from areas in the Middle East [․․․] or North Africa. They look like any European family that you would live next door to.”

Some officials also used this problematic lexicon, for example, the former Deputy Prosecutor General of Ukraine David Sakvarelidze said on the BBC that the events that took place were very emotional for him because he saw European people with blue eyes and blonde hair, children being killed from Putin’s missiles. One of the French politicians referred to the Ukrainian refugees as “high-quality immigration,” and the Prime Minister of Bulgaria Kirill Petkov told reporters that they are intelligent and educated. “This is not the refugee wave we have been used to, people we were not sure about their identity, people with unclear pasts, who could have been even terrorists…”

The anger and surprise of the people over this all went beyond the borders of the Internet and became the topic of discussion of the leading media in different countries. The first was the Indian English-language TV channel WION, whose headline of that day’s Gravitas analytical program was entitled “Western media’s racist reportage on Ukrainian refugees.”

Host Palki Sharma cited the example of Christine Fair’s interview with the BBC in September last year, when a representative of the British channel turned off Fair’s microphone, noting that the latter’s opinion violates the rules of impartial coverage of their media. Fair spoke about how Pakistan’s jihadist policy in Afghanistan led to last year’s disaster.

“So exposing terror links is a violation, blatant racism and white supremacy is fine. This is what systemic racism looks like,” Sharma said, noting that instead of focusing on people’s hardships and deprivations, the Western media only sees what race you are and what color your skin and hair are.

The American Washington Post also published a critical text about the phenomenon. The author of the article is H.A. Hellyer, a Carnegie Endowment for International Peace scientist, a senior fellow at the Royal United Services Institute (RUSI) and the University of Cambridge.

“Putin’s military also intervened ferociously in Syria, backing a murderous regime. That war unleashed a level of mass death, suffering, destruction and displacement not yet seen in Ukraine — but the West’s response was far less empathetic. The same can be said of the U.S. invasions and military operations in Afghanistan and Iraq; the catastrophic Saudi-led war in Yemen; the Israeli occupation of the Palestinians.

This double standard is so evident in how we as Westerners engage in international relations. Far too often, we dehumanize non-White populations, diminishing their importance, and that leads to one thing: the degrading of their right to live in dignity.”

The author of the award-winning political caricatures, Patrick Gathara, described the events in Al-Jazeera as follows. “In essence, the journalists are seeking to affirm white European exceptionalism and virtue by outsourcing its ills to the ‘developing’ world.”

Perhaps everything would not have had such a great resonance if the comparisons with the people with “blue eyes and blonde hair” were not made with peoples of Syria, Afghanistan, Iraq, and others who were described as “Third-World.”