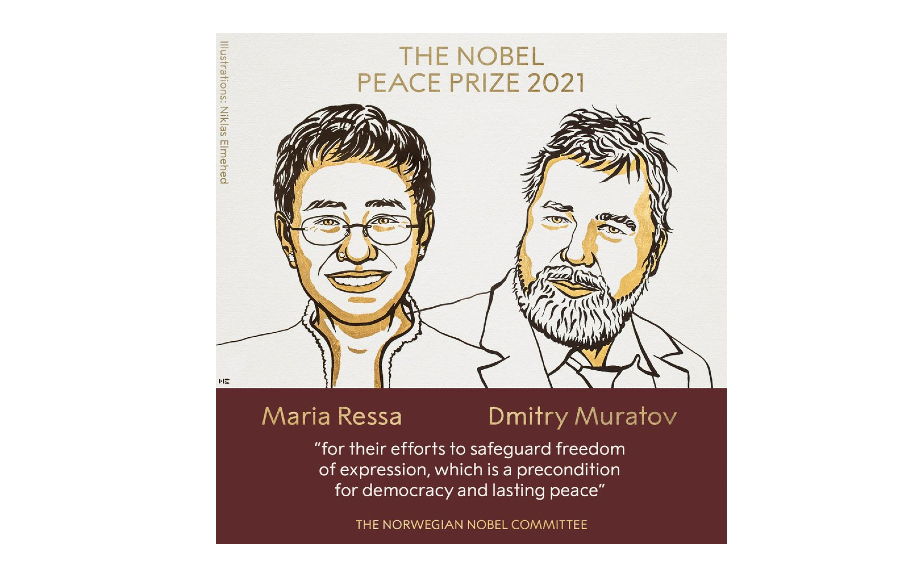 On October 8, the Nobel Prize Committee announced that two journalists had been awarded the Peace Prize: Dmitry Muratov, Editor-in-Chief of Russia’s Novaya Gazeta, and Maria Ressa, founder of the Philippine Rappler.

According to the Nobel Committee, their “efforts to protect freedom of expression, which is a fundamental condition for democracy and lasting peace,” were praised.

The statement said that Dmitry Muratov, who has been in charge of the newspaper since 1995, despite threats against its reporters and the killing of journalists, did not renounce the independent policy of the media outlet and consistently defended the rights of journalists.

Novaya Gazeta is forced to work under unstoppable pressure on the media, publishing critical articles about corruption, police violence, illegal arrests, election manipulations, troll factories and the use of Russian troops.

The head of the Nobel Committee Berit Reyes-Anderson also reminded that today marks the 15th anniversary of the murder of “Novaya Gazeta” journalist Anna Politkovskaya.

Commenting on his victory, Dmitry Muratov said that the award went to all the journalists who were killed for their professional activities: Igor Domnikov, Yuri Shikochikhi, Anna Politkovskaya, Stas Markelov, Anastasia Baburova, Natalia Estemirova.

“We will try to help all Russian journalists who are now considered foreign agents who are humiliated and expelled from the country,” Muratov said, adding that the prize money will be donated to a children’s health fund.

And the Filipino Maria Ressa is a symbol of fighting for freedom of speech in her homeland. The English-language “Rappler” news magazine she founded covered government abuse, violence, and growing authoritarianism (especially the scandals surrounding President Rodrigo Duarte).

The “Rappler” has been persecuted for years. They are trying to close it by initiating numerous lawsuits. Today, 11 criminal cases have been opened against the barrister at once, with various accusations: slander, tax evasion, foreign financing, etc.

Maria Ressa herself faces up to six years in prison as the internet security laws in the Philippines become a tool to isolate the authors of unwanted content.

Commenting on her victory, Maria Ressa said, “The world without facts is the same as without truth and trust. Now is the best time to be a journalist. When it becomes more dangerous, it means that it is the most important thing at the moment.”

The awarding of the Nobel Peace Prize to journalists was a rather unexpected decision, as the list of nominees included politicians (for example, imprisoned opposition leader Alexei Navalny, Belarusian Svetlana Tikhanovskaya), activists (for example, eco-activist Greta Thunberg).

There was even an assumption that the prize would be awarded not to individual journalists, but to the “Reporters Without Borders” journalistic organization. The number of candidates had exceeded three hundred.

Anyone can apply for this award, regardless of occupation, age and experience. The conditions oblige (it is written in Alfred Nobel’s will) that the candidate must support the peace negotiations, contribute to the establishment of friendly relations between the peoples and be in favor of the reduction of the armed forces.

In addition to these conditions formulated 120 years ago, the context of human rights protection and international cooperation has also been added.

The Peace Prize is the only one that is never recalled, even when the prize-winner’s peace-loving activity is disrupted by some undesirable and controversial turn. The prize is approximately $1.14 million.