“DigiTool 2021”: Documentary Of A Difficult Year 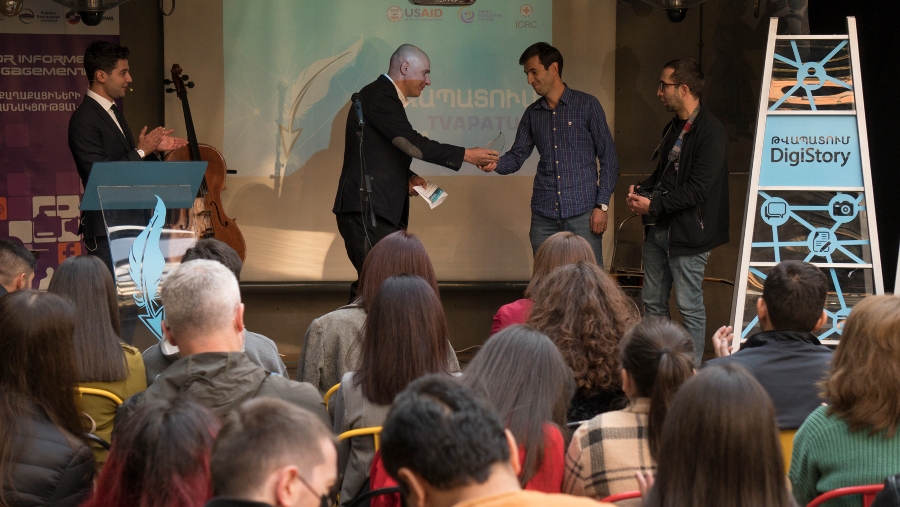 Media Initiatives Center summed up the results of the “DigiStory 2021: Stories of Change” journalism contest.

“DigiStory” always tries to encourage the creation and dissemination of quality journalistic stories, to reward those journalists who are able to present urgent and important topics in elaborate formats.

This year the important topics were: The humanitarian problems that arose after the Artsakh war, the coronavirus pandemic, the demand for accountable and transparent governance, human rights.

When evaluating journalistic stories, the professional commission attached importance to both the choice of the topic and the use of the tools to present it.

Hetq journalist Tirayr Muradyan and photographer Saro Baghdasaryan won in the Ditak category (250,000 AMD) for the multimedia investigative material “Owners of the buildings to be demolished on the shores of Lake Sevan and the alley construction program.“

This is one of the detailed journalistic works, which supposes a serious response from both the public and state structures. Tirayr Muradyan says that the idea of the material arose when the state announced that the clearing up of the coastal area of Sevan from illegal structures is a priority, after which a Sevan alley should be built.

“We wanted to inventory the private houses and buildings that are located in the area of that supposed alley. We studied and found out that many of the private houses there belong to people who still hold high positions. There was no response after the publication of the article. As a result, as we saw, neither the alley was built nor that the coastal area was cleared.” 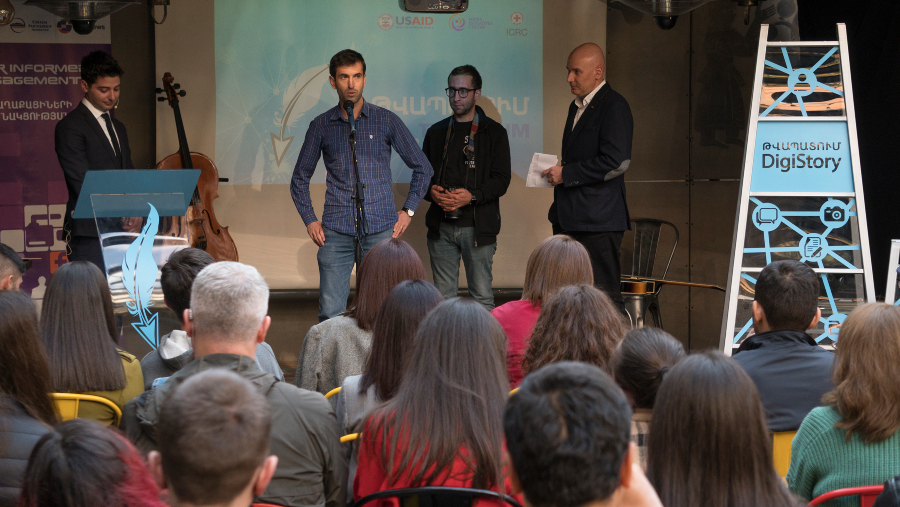 Hetq Journalist Tirayir Muradyan, Photographer Saro Baghdasaryan, Civilnet Editor-in-Chief Karen HarutyunyanTirayr said that although the journalist involuntarily becomes skeptical that his work will lead to changes, he always wants to contribute to those changes.

“Otherwise we would not be engaged in journalism,” he said.

The “Urbanista” platform’s special project “Magnified: Five years later” was the winner in the Reinformation category and was awarded 250,000 AMD.

The founder of “Urbanista,” journalist Gayane Mirzoyan said that this multimedia research was created by a large team, not only by journalists but also by sociologists. And such interdisciplinary materials help to better understand the problems.

Manana Aslamazyan, a member of the unchanging jury of the “DigiStory” contest, media expert, presenting this material, said, “There are journalistic works that say that everything is very good. Or, on the contrary, very bad. This is a versatile material created with various multimedia tools. And it stands out with its quality.”

In the extraordinary writing category, 4plus.org won with their project, “War Documentaries (Fragmentary Living),” the author of which, photographer Nazik Armenakyan, was awarded 200,000 AMD. 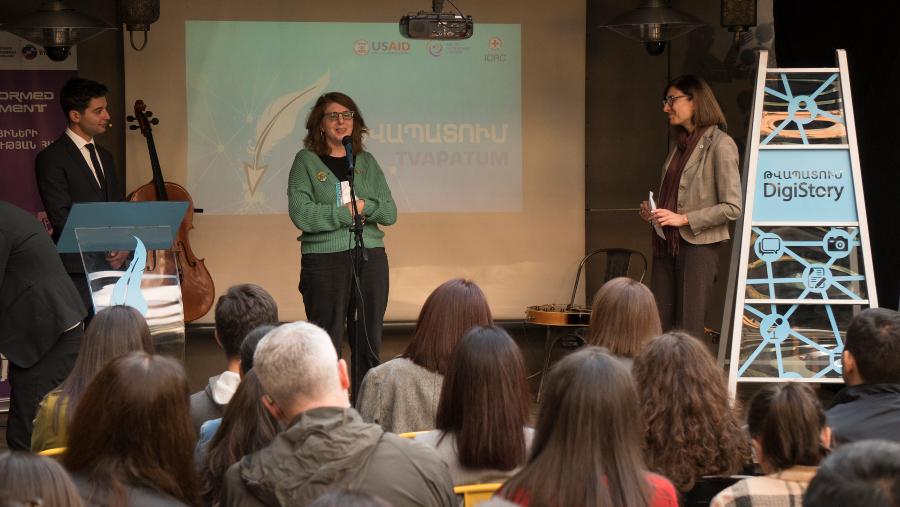 Nazik herself was not a war documentarian, but she documented the documentarians. In other words, to tell a story about the journalists who hold traces of the war within themselves. The people who create the media are the small fragments of this great project with their feelings and emotions.

Last year they were also in an emergency situation. And we all saw the war thanks to them and through their eyes.

The most valuable prize of the “DigiStory” contest is the Actor (Homo Agendi) nomination, which, according to tradition, is given not only to the author of the journalistic material, but also to the hero of that material.

Sometimes (or rather, always) the person you are talking about becomes a co-author.

The hero who strives for change, acts and inspires the audience with that aspiration is a great gift for every journalist. If you received that gift, your journalistic material will be completed with the necessary amount of empathy. And it will help to see that there are people who not only wait for the changes but also know that it is more effective to turn that wait into action.

This year the Award for Homo Agendi went to Mediamax.am journalist Gayane Yenokyan’s “…That the border will live:” The story of Vache, who moved from Yerevan to Sarushen village in Artsakh.

Both the author of the article and the hero, 22-year-old Vache Vardanyan, were awarded 300,000 AMD each, who decided to start everything from scratch, moving to live and work in the border village of Artsakh. In his words, “because I wanted the border to live.” Vache feels useful and harmonious, becoming the new resident of Artsakh, who is facing a difficult situation. 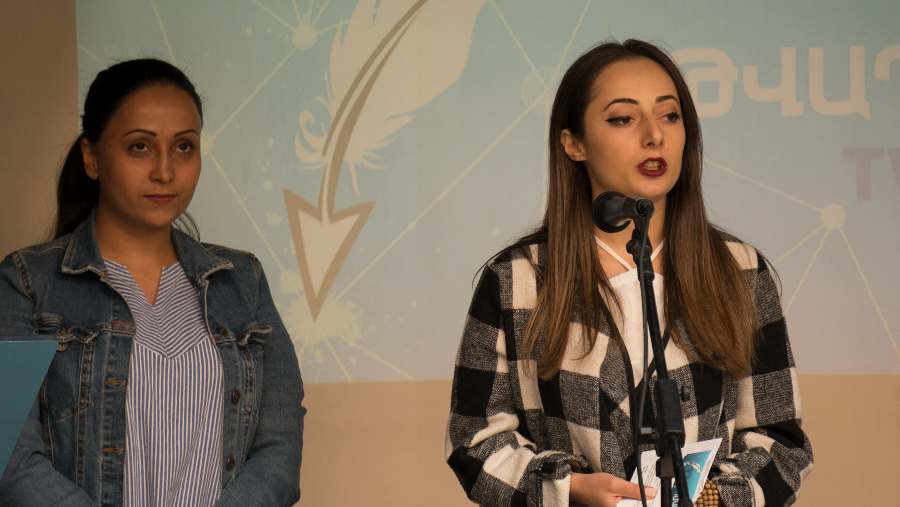 For Gayane, the crisis of human relations is no less painful than the horrors of war, which is best seen in small communities.

“Examples of human behavior are important. I am sure that people who act with sincere motives and are fearless will always serve the good.”

She said that now they are good friends and ideologues with Vache and she should follow Vache’s further steps, who opened a sewing factory in Sarushen, and soon a children’s educational center will start operating in the Red Market with his participation.

Perhaps one of the most serious problems in our media field is the lack of consistency. Or rather, the need for a chain reaction, when journalistic works will be able to become a real network, with quality work coming from each other, with the importance of the topic and the heroes changing the public perception. 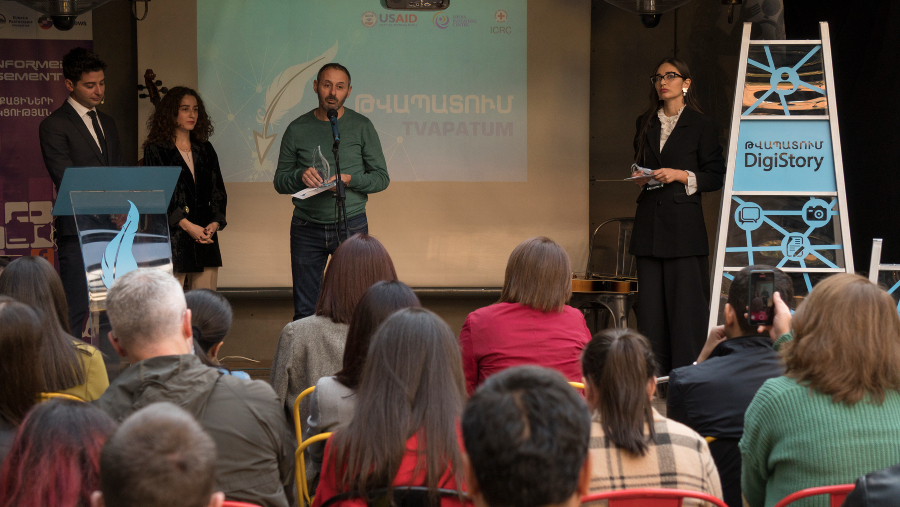 The recipients of a special DigiStory prize and a prize of 100,000 AMD each, journalist Vaghinak Ghazaryan for “Painful Journey Through War” Photo Story (Mediamax), Aren Melikyan for his podcast “New Life after the War” (Azatutyun), Margarita Ghazaryan for her research material, “Extraction by contract, in fact, non-exploitable mines. Abandoned Mines of the region of Syunik” (Infocom), spoke about that.

Margarita Ghazaryan, who mapped the mines and roads of Syunik, said that the data needed for the research, which should have been open, were in fact closed. The road to Syunik, too.

Margarita hopes that the archive of investigations will eventually help the public orient itself around difficult issues. And the work of journalists will also be appreciated by colleagues.

Anna Sahakyan, author of “Enlargement of communities: Problems and Results” (Infocom), and the creators of the program “Infodemia” (HLA/Tsayg TV), were awarded the “DigiStory” incentive prize (50,000 AMD).

“DigiStory 2021” summed up this difficult year with the hope that quality journalism is a profession with a long-term impact (not the production of news that quickly loses its usefulness), as its importance is both shown and seen.