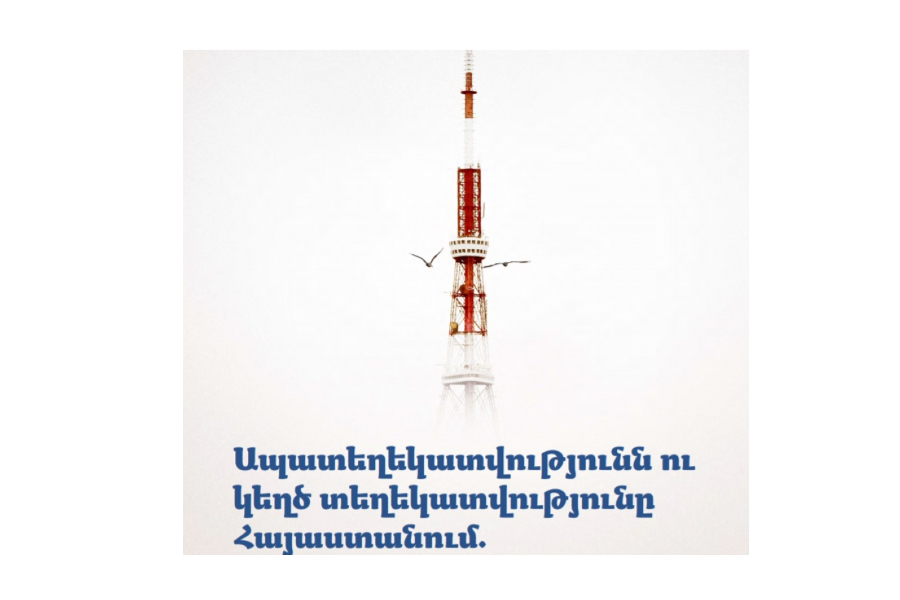 Armenia, like many other countries today, faces challenges in the information field, including false information, misinformation, and the interconnected forms of fake news. Although some forms of misinformation were previously prevalent in the broadcast media, the rapid increase in the use of online news and social media in recent years has created new opportunities for the rapid spread and dissemination of misinformation. Today, state, non-state, internal and external actors are actively involved in spreading misinformation in Armenia, often using various tools and platforms.

The report published by the human rights organization, Freedom House, and authored by Armenian expert researchers, covers the development of misinformation in recent years,

The purpose of the report is to draw attention to the severity, complexity and form of false information flows circulating in Armenia, and to assess the existing risks to democratic development in the country.

Looking at the big picture, the researchers found that most of the fake stories of recent years have revolved around four topics: the COVID-19 epidemic, the second Nagorno-Karabakh war, social and cultural issues, civil society and democracy. It is worth noting that in the false information on all these topics there are general features, in particular, that the “Western agents” and “Soros” are trying to destroy the state, the country’s security and national traditions.

Media.am singled out the main conclusions related to the four topics of the report.

The author of this section, information security specialist Arthur Papyan mentions that in 2020, in the first half of the year, false rumors were spread about the origin of the new coronavirus, its spread and treatment methods in Armenia. World-famous stories have also entered the Armenian media, including myths about natural remedies and conspiracy theories that the virus is linked to a global campaign to install 5G-enabled microchips to make humans remotely controllable. Myths about the COVID-19 virus being spread via bananas or COVID-19 tests have spread across the country. False rumors circulated that the state’s offer to wear protective masks was linked to internal corruption, as well as that government officials made a profit from the import, production and sale of masks.

The fake news then focused on the effects of masks and protective gloves, and the effects of vaccines as COVID-19 developed internationally. From time to time, false information about the epidemic was intended to call into question the competence of government officials and the authorities.

The former ruling elite, opposition and civic groups often put forward the narrative of incompetence in order to oppose the agenda of the current authorities. The officials, in their turn, created conditions for the emergence of this news with a contradictory, weak and incomplete state response to COVID-19.

For example, one of the most common rumors was that COVID-19 was part of population control or a new world order within the scenario of a Western or American conspiracy.

The author also notes that there are political aspects to the COVID-19 misinformation ecosystem. From this point of view, the current government of the Republic of Armenia is not able to fight against the epidemic and is either under the influence of foreign actors like George Soros or the WTO. The online media, often linked to Armenia’s former ruling elite, is also responsible for spreading such rumors, as are the public figures who combined COVID-19 “speculation” with criticism of the government.

The author of this section of the report, who chose to remain anonymous, refers to the information spread during and after the second Karabakh war, which was mainly related to the stories of premeditated defeat and “sold lands,” myths about the role of foreign players, as well as the phenomenon of Artsrun Hovhannisyan.

The report says that given the political and cultural sensitivity of the issue, the conflict has been the subject of regular speculation and misinformation in Armenia, Nagorno-Karabakh, Azerbaijan and elsewhere. The second war in Nagorno-Karabakh was the subject of systematic misinformation and speculation, as people tried in every way to understand the sudden outbreak of violence and limited sources of information.

The author refers to Lieutenant Colonel Artsrun Hovhannisyan, who became one of the most visible and reliable figures for the Armenian society during the 2020 war. People expected daily updates on the war from Hovhannisyan. He quickly became a primary and reliable source. His reports became more important as the dangers of war and restrictions on war reporting prevented journalists from reaching the forefront. From the very first days of the war, Hovannisian and other officials adopted the slogan of unification and the hashtag “we will win,” and it became the focal point of public discourse about the war, both on and off social networks.

After the announcement of the ceasefire, when the more complete picture of the war was already visible, the public began to suspect that the state information system had misled them. The situation became especially dire when officials began to update the death toll from the war, which was much higher than expected.

Whatever the reason, the state needs to review and explain its behavior. Doing so will not only alleviate public confusion over what happened during the war but will also restore the integrity and credibility of state communication functions.

The report also addresses the post-war assertion that Armenia’s defeat was somehow predetermined. Although there is very little evidence to support this narrative, it has already become a subject of speculation and distortion in Armenian society. Moreover, in order to support the information campaigns against the current government with baseless allegations, the conservative opposition forces have expanded it with a number of unsubstantiated allegations, using the topic of premeditated defeat as an occasion to demand the resignation of the current government.

The author notes that Nagorno Karabakh remains a very sensitive issue for Armenian society and a central issue of national policy. Actors can manipulate positions on Nagorno-Karabakh to validate, support or discredit politicians, and disinformation flows indicate that this process is already underway.

This section of the report analyzes the main misinformation circulating in Armenian civil society since 2018 and its impact on democracy in Armenia.

The Velvet Revolution broadened the nature of false information in Armenia. On the one hand, in the context of human rights, misinformation gained more support, while at the same time, the once infrequent ideas targeting civil society and democracy grew in both scale and frequency. If in the past several civil society actors or politicians were called foreign agents or considered a threat to national security, then after 2018 these have become a hot topic that is often discussed by the general public.

In particular, the report focuses on two main areas that aim to present registered civil society organizations as funded or supported by foreign actors.

The first aims to damage public perception of civil society by portraying it as a “Western agent” by generating falsifications on the attitude of civil society organizations towards the Armenian-Russian relations by disseminating a narrative of alleged covert actions within the Armenian state.

The second assertion is that civic activism is weakening Armenia, and in particular that certain civic behavior has been linked to the second Nagorno-Karabakh war and Armenia’s military defeat.

The group making claims about “foreign agents” unites civil disinformation campaigns and tries to present civil society as an anti-government element that serves the interests of other countries. Following the outbreak of war in Nagorno-Karabakh in September 2020, disinformation campaigns revolved around this narrative to portray civil society as an “enemy agent” (Azerbaijan or Turkey) seeking to undermine the foundations of Armenian statehood.

The author of the section, media expert Anna Pambukhchyan, notes that in late 2020, misinformation exploiting the link between civil society, democracy and national security intensified again.

People were looking for answers about the end of the second war in Nagorno Karabakh. Members of the former regime, opposition groups and related media outlets took the opportunity to present Armenia’s military losses as a result of democratic thinking.

The author of this section, journalist Arshaluys Barseghyan, analyzed the stories of false information and misinformation on social and cultural issues in Armenia in recent years and explained their impact on democratic culture in Armenia.

She notes that for the past four years, the main topics of false information have been the Istanbul and Lanzarote Conventions, new standards of general education, and some cultural events and products.

This section of the report presents the information ecosystem of the mentioned topics, identifies the vulnerabilities exploited by them and assesses the consequences.

False information and misinformation on these issues have been reported in online media, on television, on social media, and in public statements by officials, political parties, civic groups, and private citizens. Numerous information campaigns targeting social and cultural issues aim to exploit value-based divisions and incite intolerance in Armenian society with the aim of using those divisions to change political power in the country.

The author notes that misinformation about social and cultural issues has serious consequences for the development of democratic culture in Armenia.

It mainly referred to national ontological concerns, arguing that the conventions contradicted Armenian values and national identity and threatened the integrity of Armenian families. Such narratives are mostly supported by conservative civic groups and political parties, mainly men, who actively distort conventions to provoke public debate about national values and the future of Armenia.

The cultural events and artistic manifestations of recent years have been the cause of misleading stories and in some cases have been included in wider discussions about threats to Armenian values. For example, in 2019, the news about the provision of state financial support for the shooting of a documentary about transgender athlete Mel Daluzyan caused a very negative reaction among conservatives. Critics have argued that the government supports “LGBT propaganda” and that the film promotes the “business of transgenderism.”

Discussions on new standards of general education were also a cause for spreading misinformation. Among other changes, the draft proposed to include the history of the Armenian Apostolic Church, which was previously taught as a separate subject, in the general course of Armenian history. Conservative groups and the Armenian Apostolic Church criticized the bill, accusing the Ministry of Education, Science, Culture and Sports of erasing national values from the state education system.