61% Of Armenians Consider The Situation Very Tense And Do Not Trust Any Media: Survey 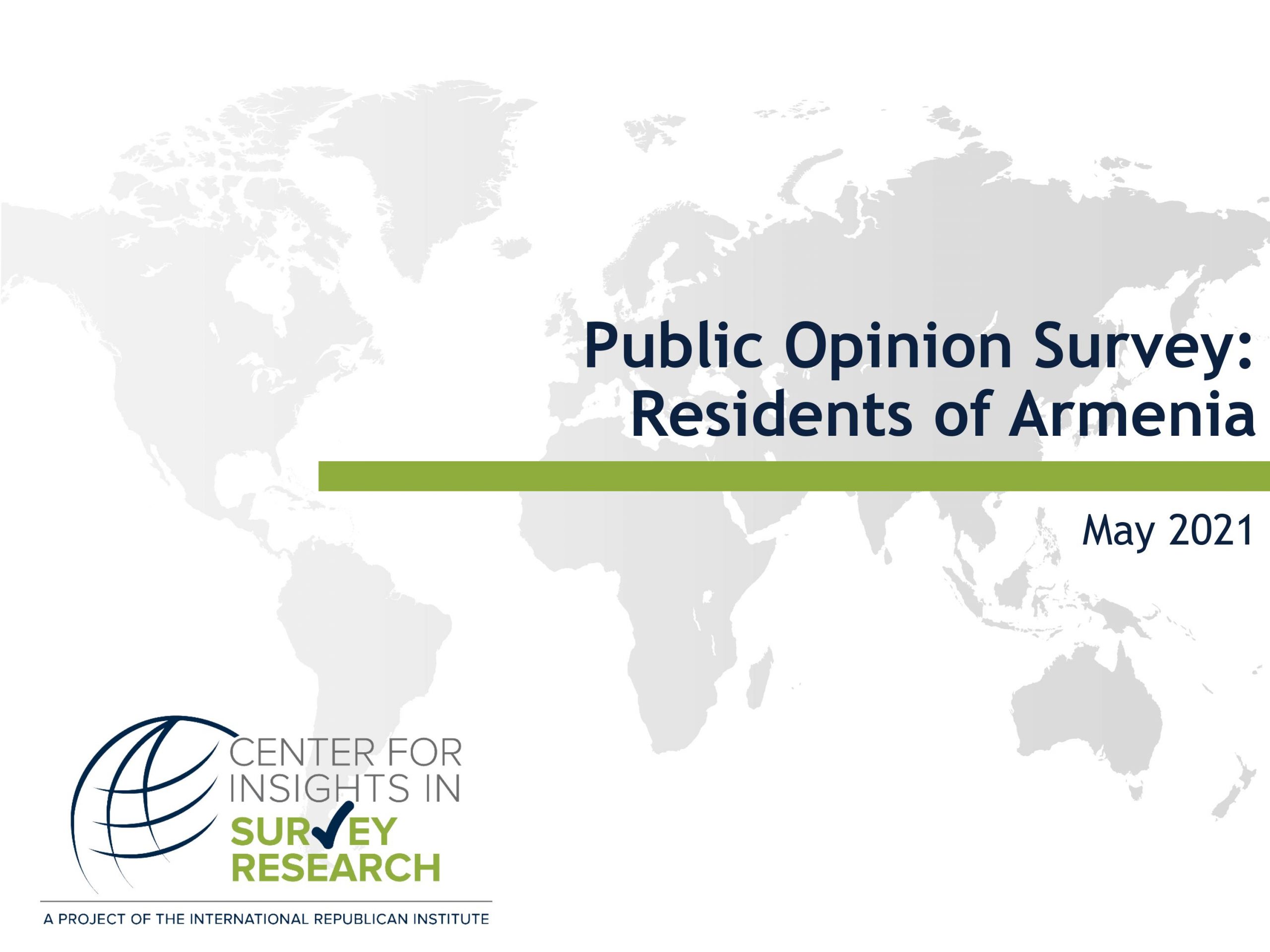 The International Republican Institute (IRI) conducted a public opinion poll to find out what ratings different parties, politicians and institutions have in pre-election Armenia, what sources of information people use and what problems they see in post-war Armenia.

The survey was conducted from April 8 to May 4, 2021, through telephone interviews and included 1,203 adults. The residents of Ararat, Gegharkunik, Shirak, Syunik, Tavush are among the respondents.

The method of inquiry is random digit dialing (RDD), which is based on the codes of three major communication operators. The sample was made on the basis of data from the RA Statistical Service.

Armenians considered the main problems: political instability (12%), return of prisoners of war (11%), unemployment (11%), risk of military attack by the enemy (9%). 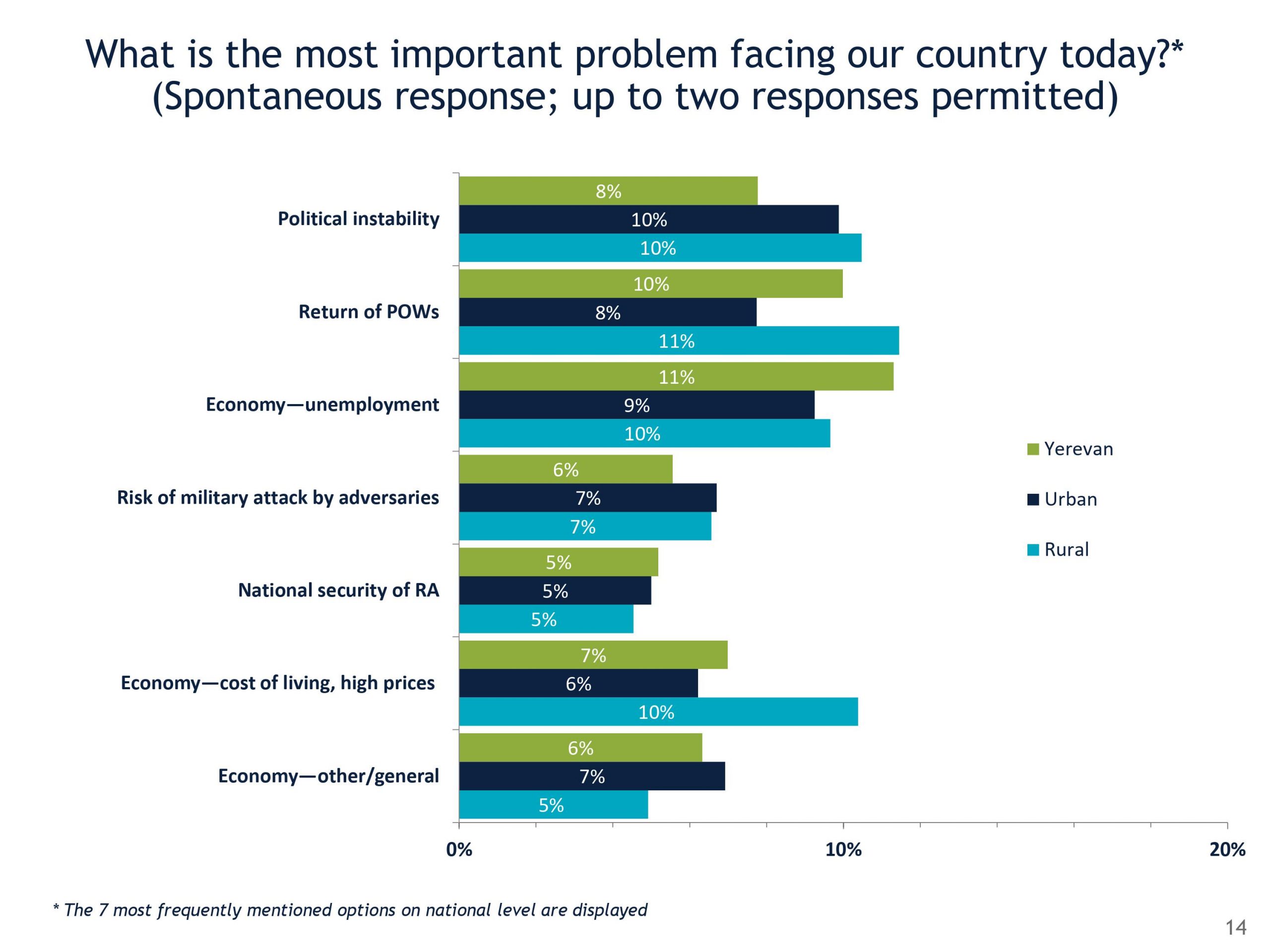 This poll outlined a unique pre-election situation. The vast majority (72%) say that they will definitely or probably vote in the snap parliamentary elections, but few have mentioned any preferred political force (the question of who you will elect presupposes a free answer, without a pre-designed questionnaire). 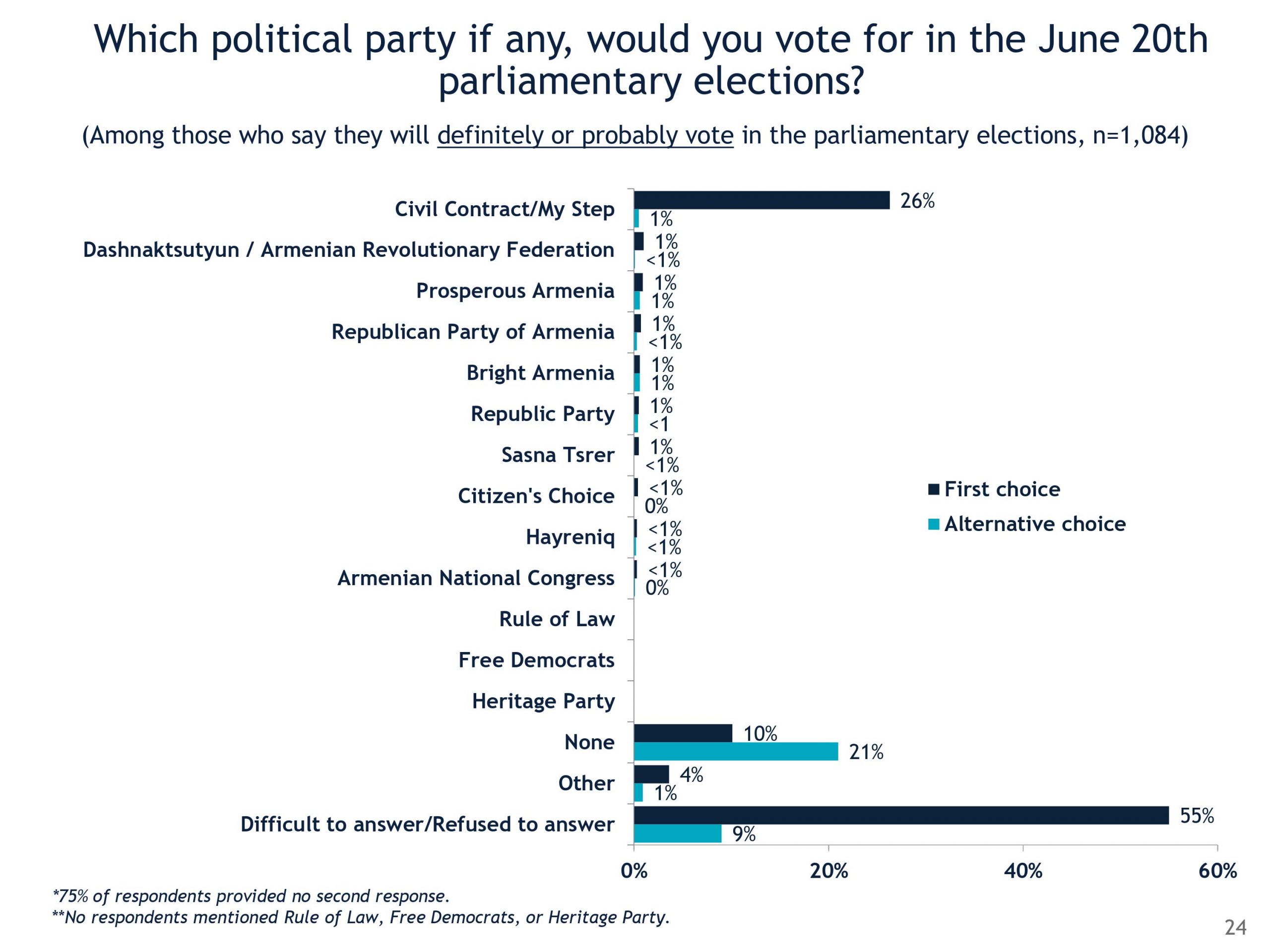 Almost half of the respondents, 43%, think that Armenia is moving in the right direction now in a broad sense, 20% – wrong, 37% – find it difficult to answer. 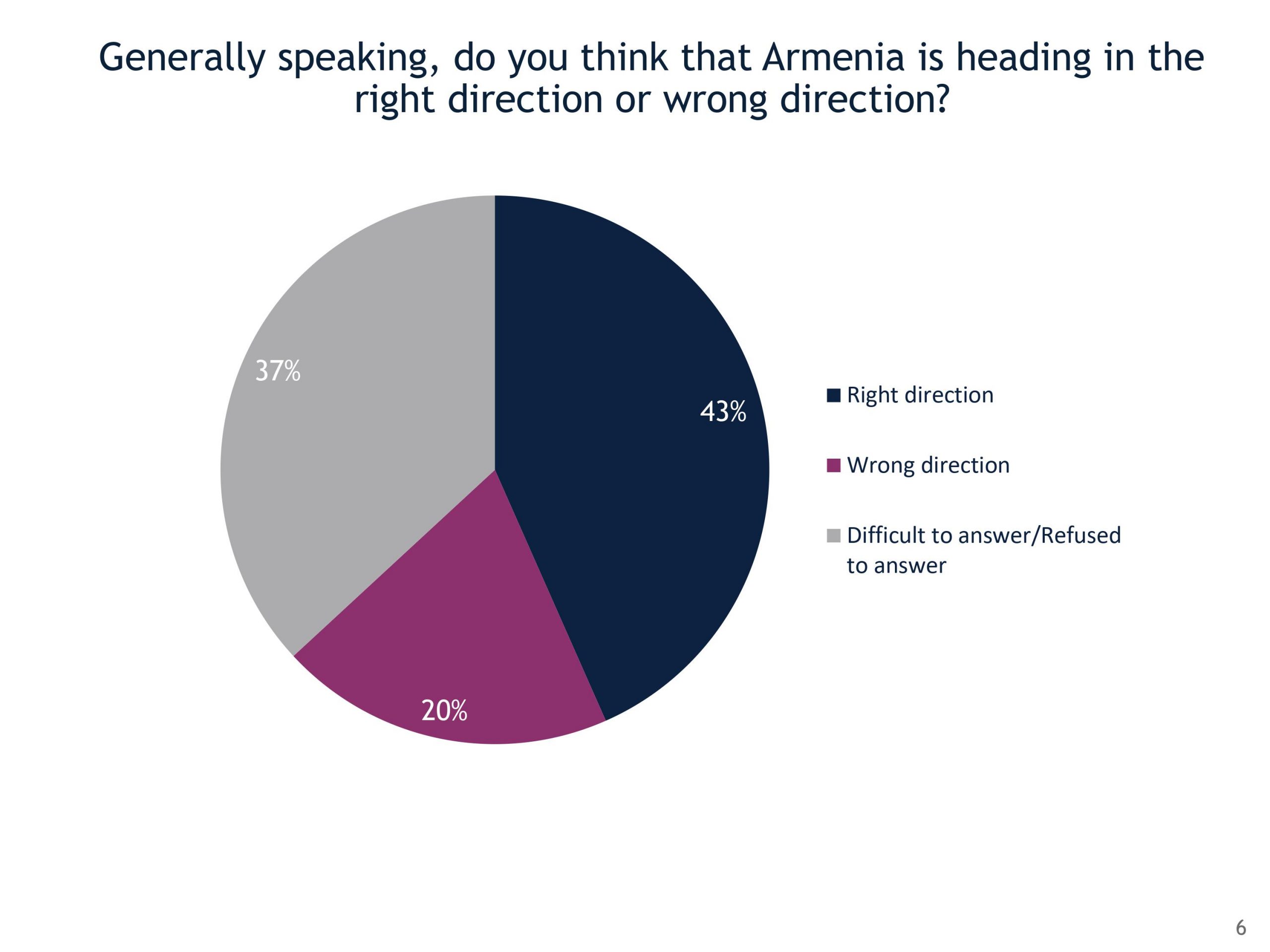 It is interesting that the results of the previous poll conducted in February of this year were more pessimistic, as 45% considered the direction chosen by Armenia wrong.

However, the mood of distrust and disappointment has deepened: 29% of respondents are disappointed and do not believe in any improvement, and 22% believe that the future will be better. 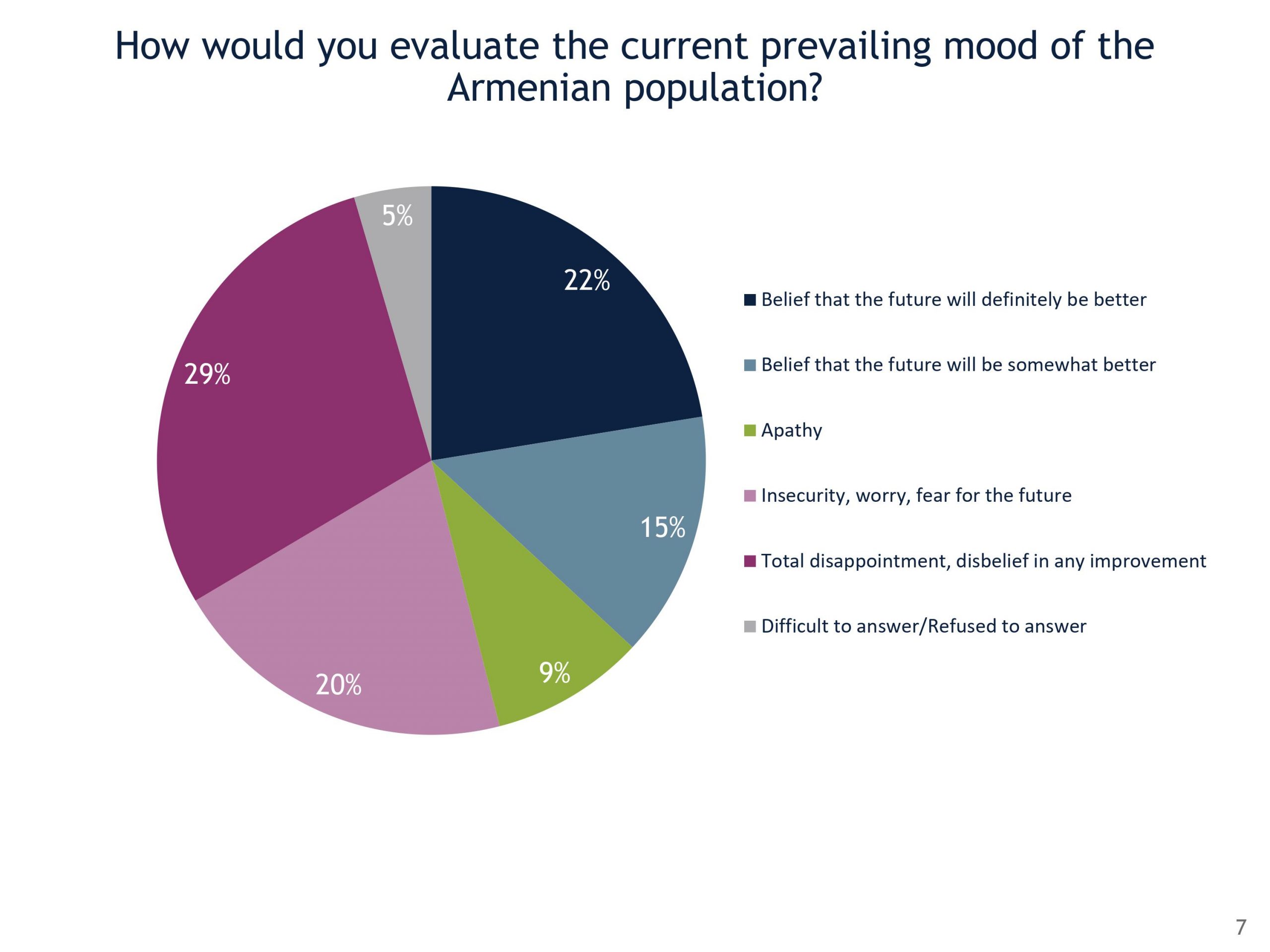 41% of respondents think that the economic situation has significantly deteriorated in the last six months. But at the same time, 57% said that if they had the opportunity to work abroad, they would not leave Armenia. 70% also do not want to go abroad for permanent residence.

The trust in various institutions has been severely tested, almost everything from the Prime Minister’s Office to the army leaders, courts and police inspire less faith in Armenians than it did six months ago.

Do you think Armenians are afraid to express their opinion freely? A significant part of this question was answered that they are not afraid. 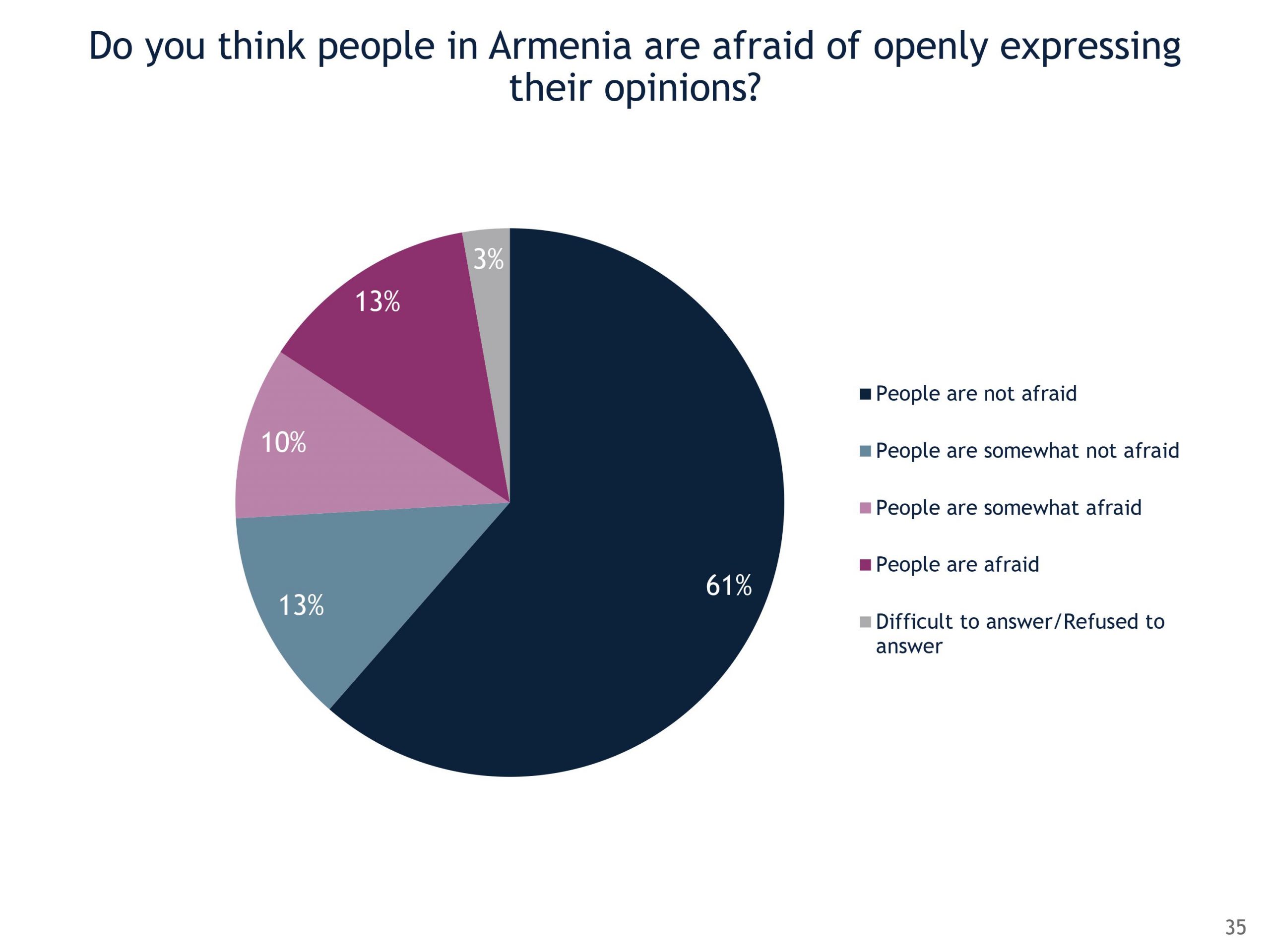 Questionnaires about information sources show that television, which is considered to be the main source of information, has found itself in a paradoxical situation.

41% of respondents turn on the TV every day to hear political news. And 32% never turn it on. 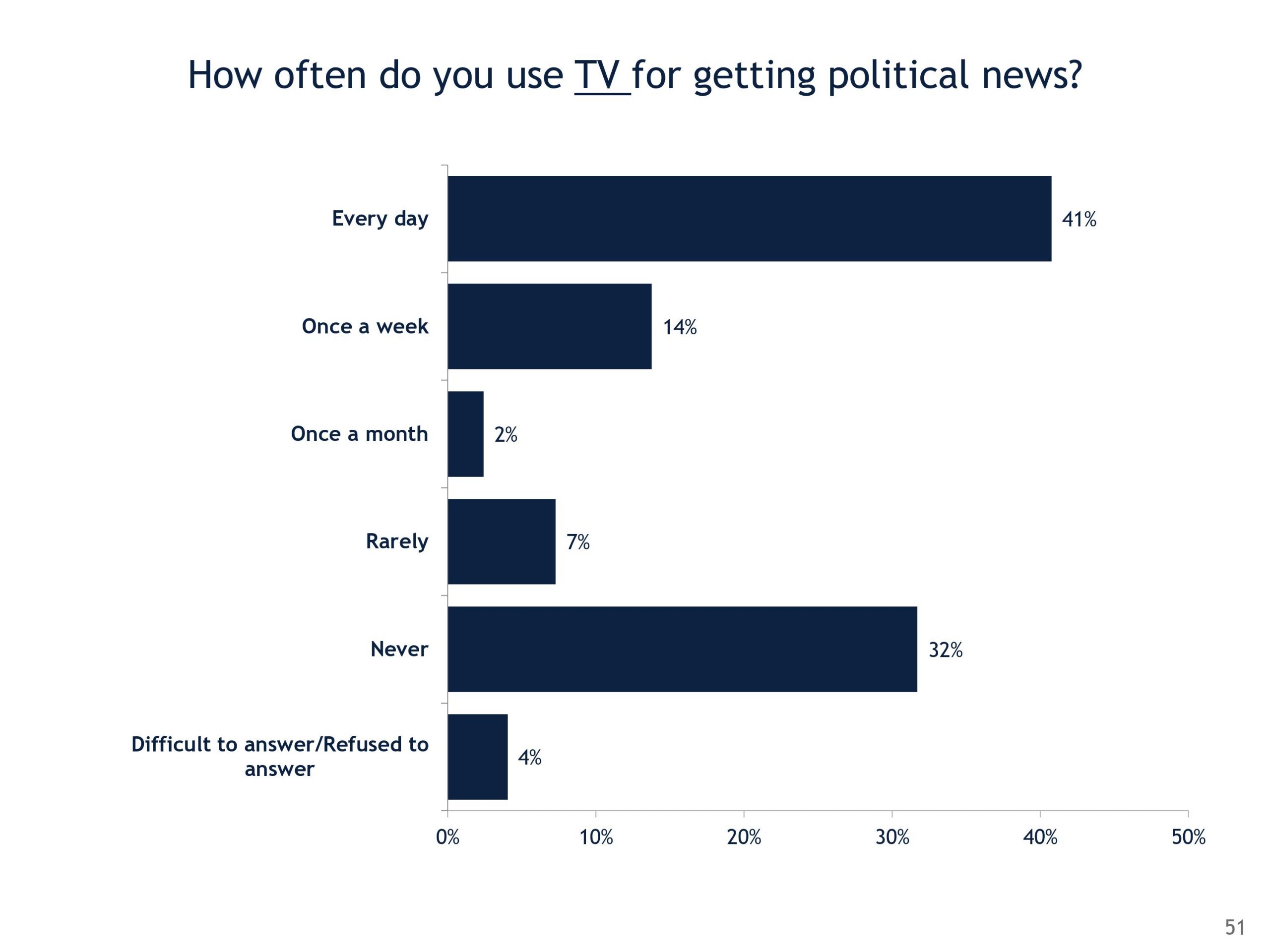 And if they do turn it on, they watch “Public TV,” “Shant” and “Armenia” in almost equal proportions.

How often do you use social media to get political news? The answers to this question are mainly about Facebook. 47% of respondents said they visit Facebook every day. The majority did not mention Twitter, Telegram and Instagram. 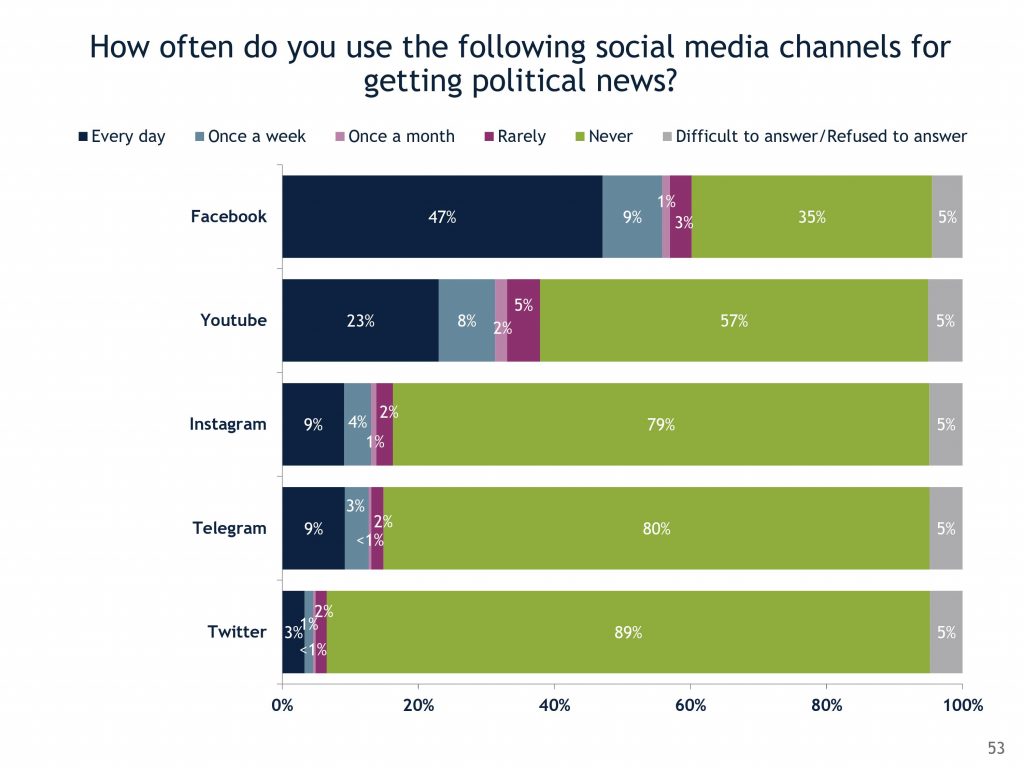 When the issue reaches the trust in the media, a rather catastrophic picture is created.

The question of which media in the broadest sense is considered the most reliable from the point of view of political news presupposes a spontaneous answer with the possibility of mentioning two media without a hint.

In the case of the first-mentioned media outlet, the following picture was obtained: 13% of the respondents considered the Public Television reliable, 9% – “Shant,” 6% – Radio Liberty. 47% found it difficult or refused to answer.

61% chose the answer “No one is trustworthy” as the second answer. In other words, they thought for a while and said that they did not see a reliable media outlet reporting political news. 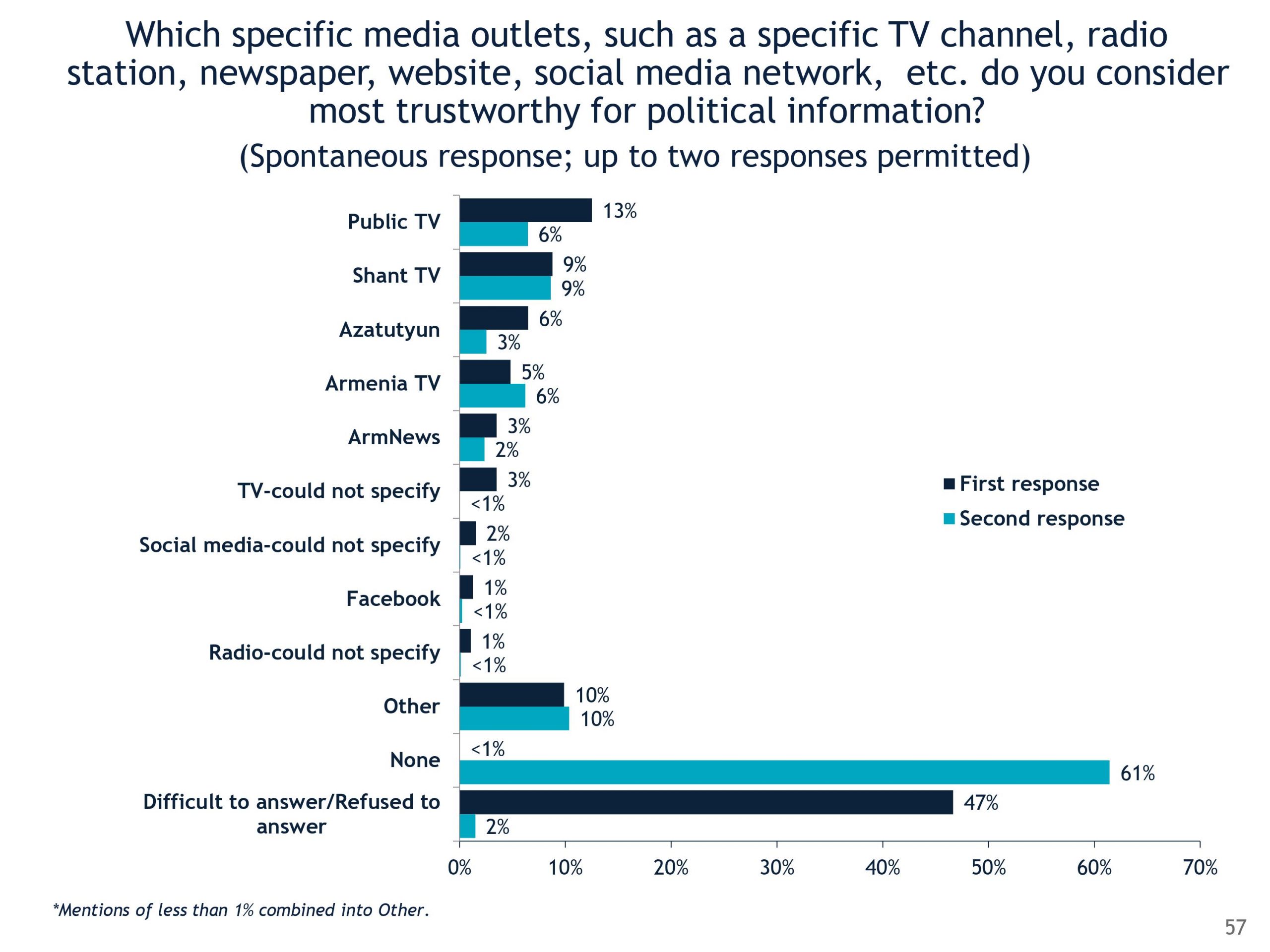