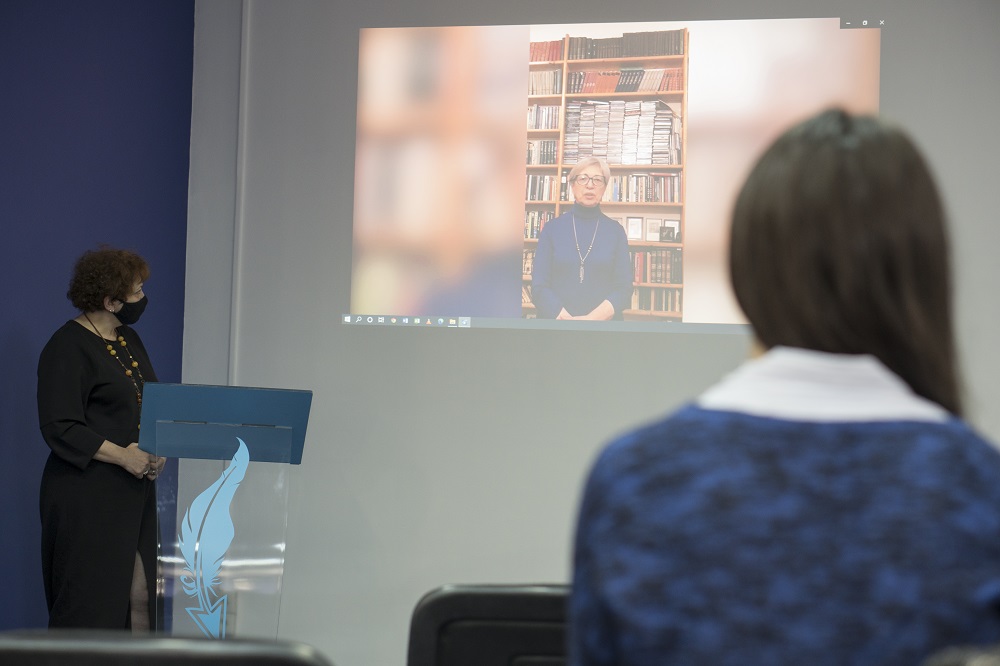 “Tvapatum” journalism competition summed up 2020 by awarding prizes to the authors of influential media pieces. The Media Initiatives Center compiled a series of awards it had established before the Armenian-Azerbaijani war, with the expectation that quality journalistic work could foster a chain of change in Armenia.

The war had not yet changed the lives of many and had not been included in the competition materials in any way.

And now, for Armenia, which is in a difficult post-war situation, the strength and professionalism of journalists has been used to fill both the gaps of vital information and the need to remove and present human stories and problems.

“Tvapatum” was created to see the state-media-citizen connection and to ensure its uninterrupted work.

“Tvapatum: Stories About Change” competition’s Homo Agendi Award is presented to the author and heroine of the journalistic material. 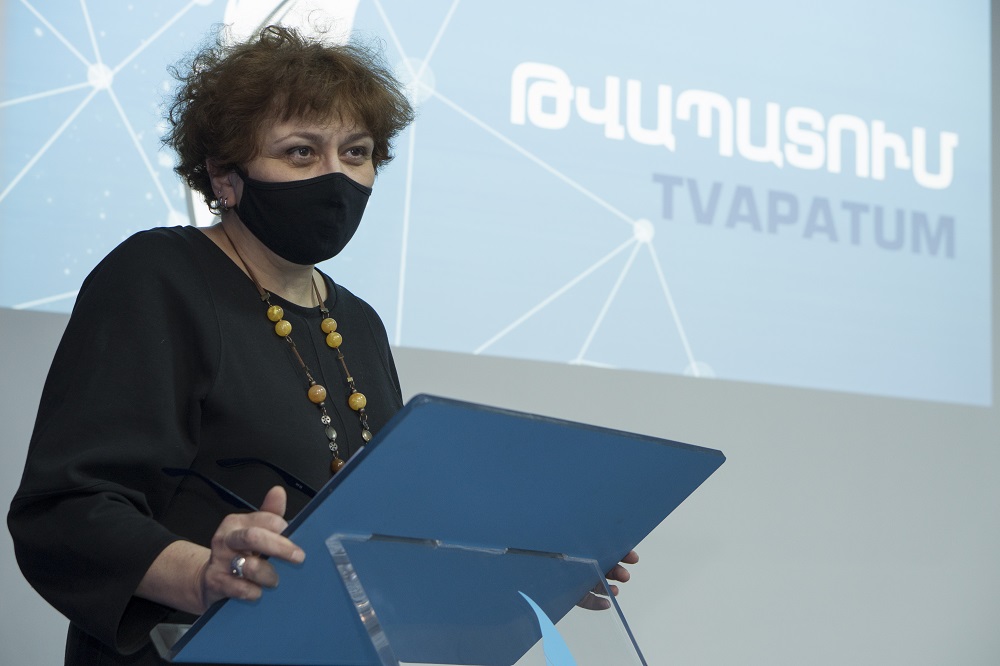 MIC Executive Director Nouneh Sarkissian said that the hero of a successful journalistic article is always the journalist’s co-author: together they build the final media product.

This year, the main prize went to Public Television’s “Hero of Our Times: Lusine Baratyan” reporter Khane Poghosyan and Lusine Buniatyan, who together with her son Rafael, who has Down Syndrome, started a semi-finished product production despite fate, public indifference and family and financial difficulties.

According to Khane Poghosyan, it was important for her to show the strong person and the product that Lusine, the founder of “Lucia Food,” makes with love and patience.

And Lusine added, “In fact, Khane made me a hero, I was just following my motherly instinct, which helped me in the most difficult moments.”

The award was handed by last year’s winner-hero, Director of Civil Aviation Tatevik Revazyan, who said, “Now that the challenges have increased and many young people are going through difficulties, examples of how a working person changes the environment will help us.”

The winner of the “Re-information” nomination is Gevorg Avchyan, whose article “Armenia’s energy alternative” published in “YerevanToday” is an analysis of the current and prospects of Armenia’s energy sources.

“When you write about difficult topics, the question always arises, how to make the material read so that people feel the beneficiary of the implemented reforms. So that the news doesn’t pass them by, but has an influence by showing how this or that decision will affect their lives,” said Gevorg. 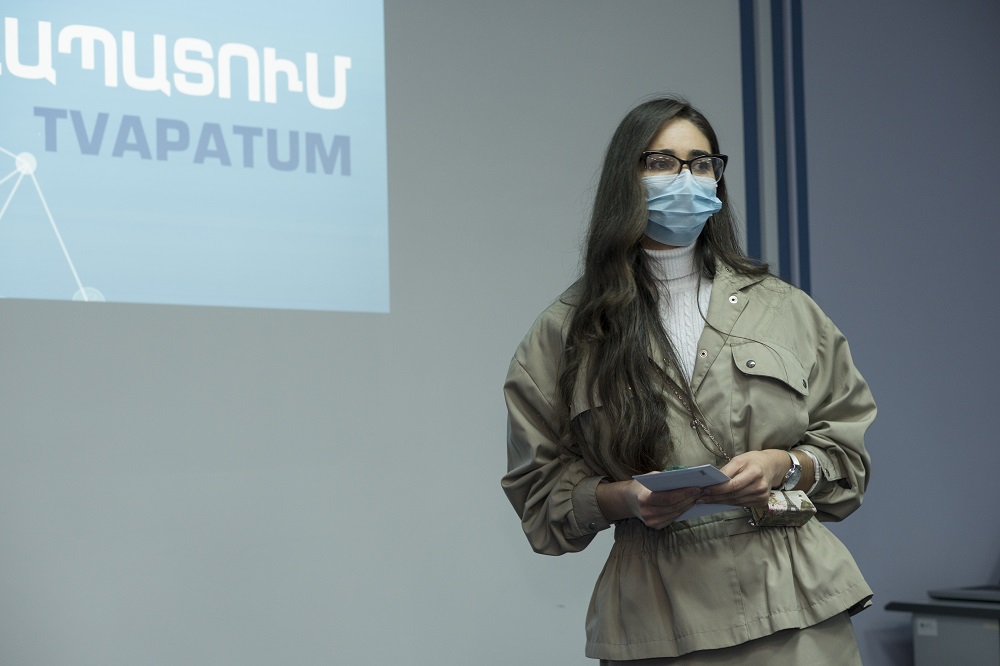 The winner of the “View” nomination is Margarita Ghazaryan, who prepared research for infocom.am about the current state of the Lijk’s copper mine, which has a rather unknown future and a dark past: “860 felled trees and no water permit. The mystery of the shareholders, exploitation and termination of the lake mine.”

In the genre of investigative journalism, such materials are important documentation: they help to understand the whole picture of the situation. In this case, starting with the owners of the mine, ending with the reactions of the residents of the Meghri community and environmental issues. 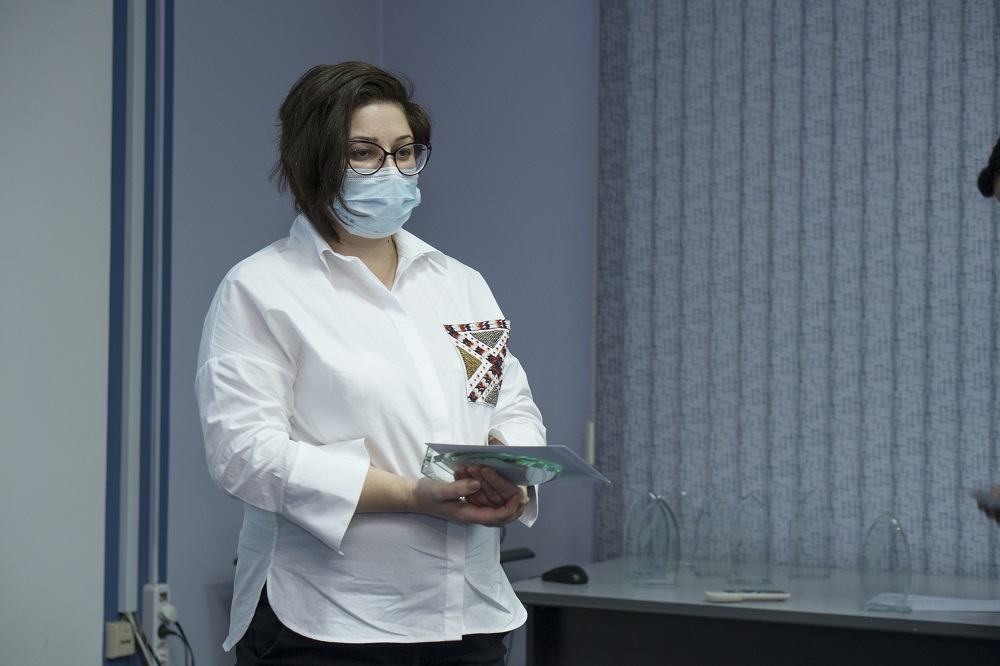 Astghik said about this painful and taboo topic, “It is good that there are laws, but they must work.”

The “Emergency Writing” award was given to Nana Knar Martirosyan, who published in Sputnik Armenia “They are fighting in the coronavirus hell: a few hours in the intensive care unit.” The author visited the wards of Artashat Medical Center and wrote an essay based on her personal impressions. The heroes are doctors, the feelings and emotions are the journalist’s.

“In the days of the epidemic, it seemed difficult to work, then the war started ․․․ Of course, I would have liked that the fight against the infection was our only difficulty,” said Nana Knar.

The “Verified” award was presented to Hetq journalist Seda Hergnyan for the article “Conflicting Data: Investigating the 3 Tons of Semi-Finished Jewelry Armenia Exported to Russia.”

Seda prepared this investigation with a Russian colleague, and traces of a large flow of jewelry were also investigated by Russian sources. The Armenian investigative bodies did not respond to this important work on the export of gold items with a customs value of 87 million dollars.

“This is a material which, although based on open data, required extensive work, as it was necessary to decode and compare customs data. It seemed that the investigation would receive a response from state structures, as the gold items were exported under the name of “scrap metal,” and it is obvious that it was deliberately hidden. Unfortunately, there was no response,” said Seda. 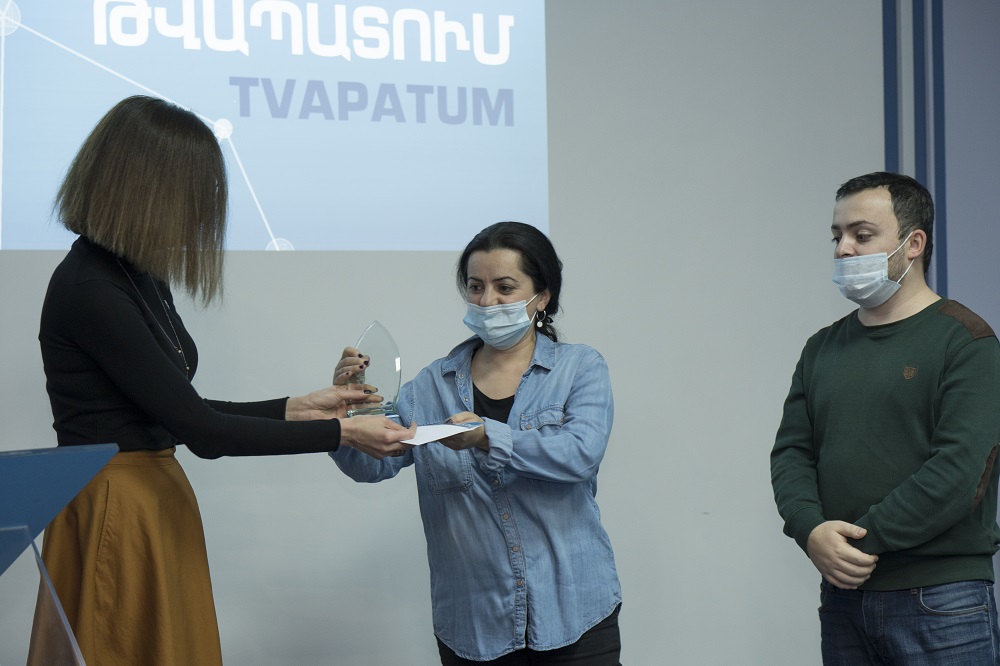 Hetq journalists Marine Martirosyan and Vahe Sarukhanyan received the “Humanitarian” award for the article “Mary Mezhlumyan, ‘Little Karen gave me wings.’“This is a story about a young woman who confronts a war that hints at how the war has left its mark on the quality of life of younger generations. In 1993, as a child, Mary lost both her arms and part of her leg to a cluster bomb, and now a newborn baby has appeared in her life.

Marine, who has known Mary since she was a child, wrote about how tragedy comes to life at once and how difficult it is to overcome it, step by step, centimeter by centimeter. 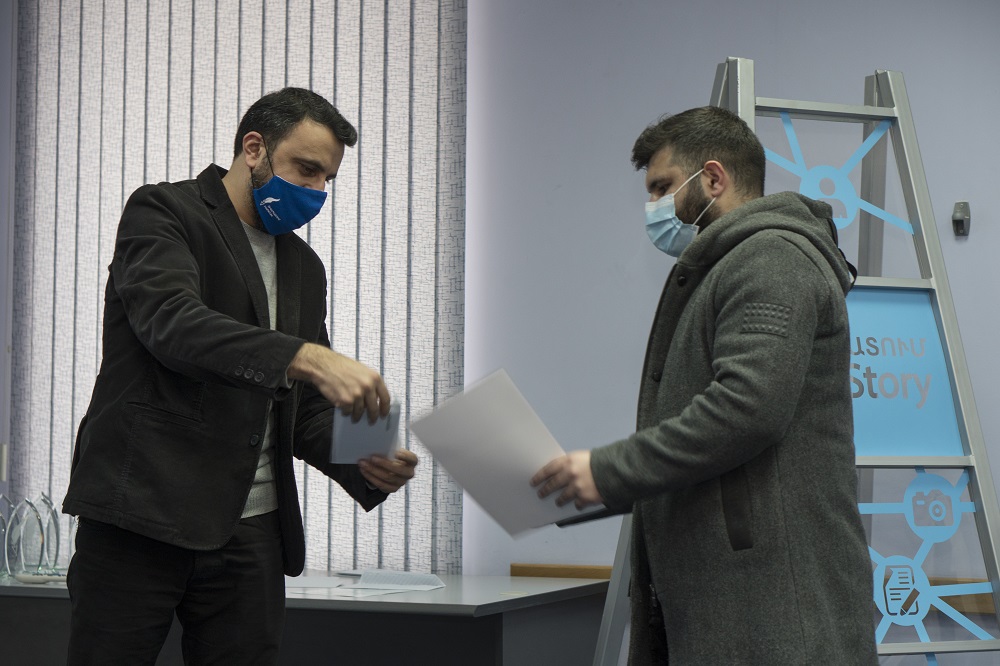 Traditionally, “Tvapatum” also awards prizes to students. This category is called “I am the media” and is awarded to young people who may not become journalists but want to write and talk about the media.

This year the winner was Christian Ginosyan “Corona-FAIL: Quarantine Diary/Sound Isolation” podcast, Angelina Afyan with the essay “Information Filtering” and Lilit Mkrtchyan with “Confined to the Screen. My Diary of Self-Isolation.”

Lilit Poghosyan received the “Special Award” for “Tvapatum” published on the ampop.am website. “No taxable property will remain: Property taxpayers in the Republic of Armenia and the amount of payment from 2021” explanatory-informative article, Ani Rapyan for the article “To live without fear of death” published on chai-khana.org.

Anush Mirzoyan was awarded incentive prizes for the documentary “Needs of the Soul” prepared by the Medical Center for People with Mental Disorders (zangezur.tv), Narek Martirosyan for the “The Distribution of Armenian Slaughterhouses by Regions” multimedia material (“Aravot”), “Coronavirus Test Kits Produced in Armenia: Manufacturing Equipment Doesn’t Adhere to Legal Norms” investigation (Hetq). 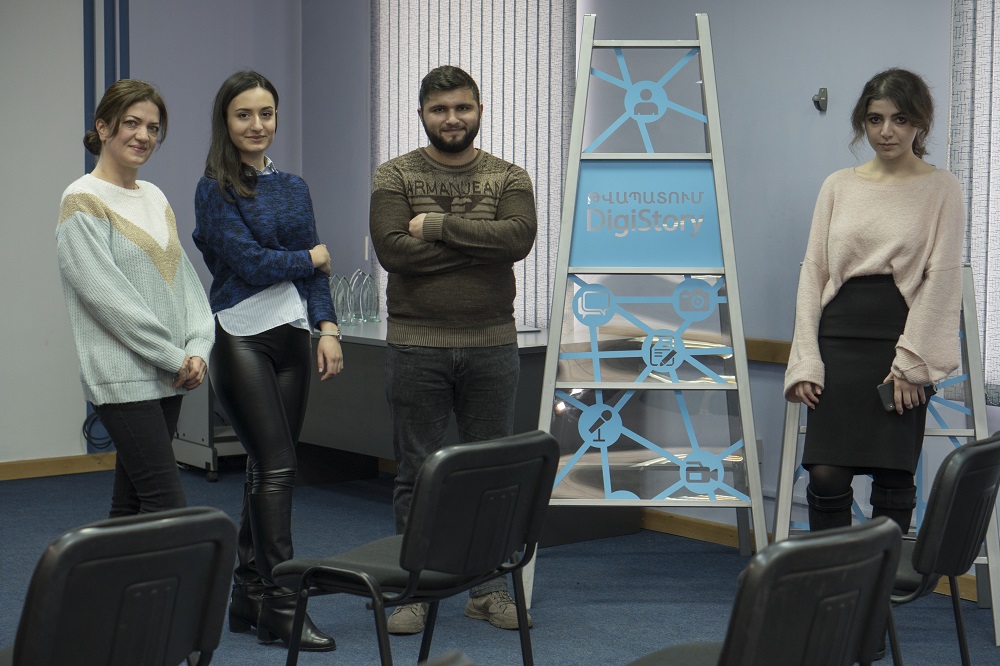 Samson Martirosyan was awarded special commemorative prizes for podcasts, “Beyond Stereotypes: The Yezidis of Armenia” (Hetq) and Nazik Armenakyan for the photo story “Resuscitation” (4 Plus). 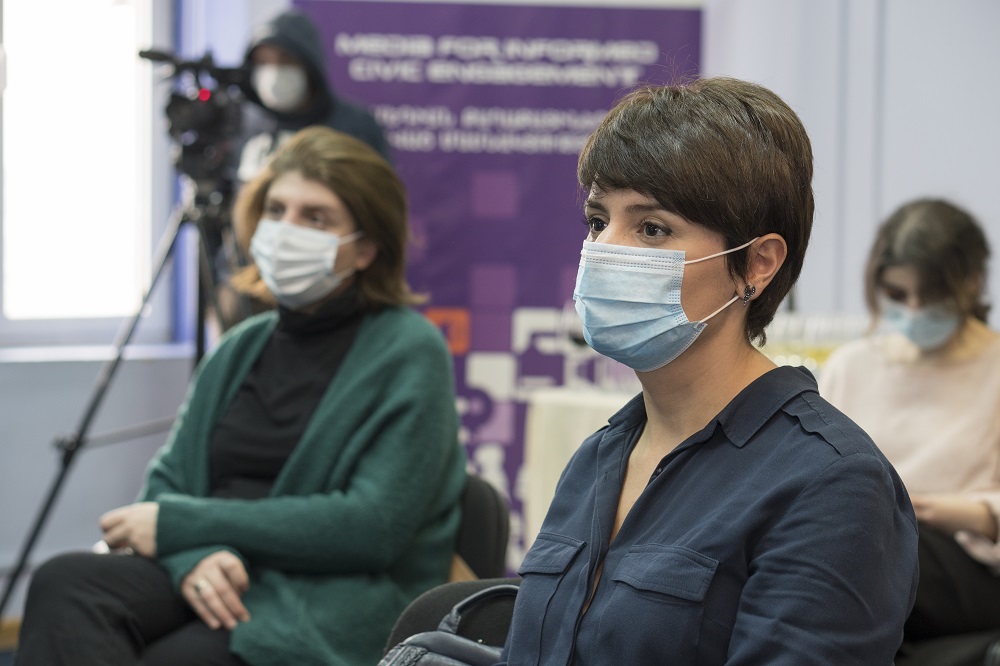 These two works were created with the help of grants from the Media Initiatives Center, with the aim of developing and promoting new journalistic genres, in this case, the language of audio and photo construction.

By the end of 2020, the participants of the “Tvapatum,” jury members and journalists hope that reliable and impartial media can help clean the media field from hatred and lies. Making visible, promoting and providing financial support to the authors of quality journalistic works.