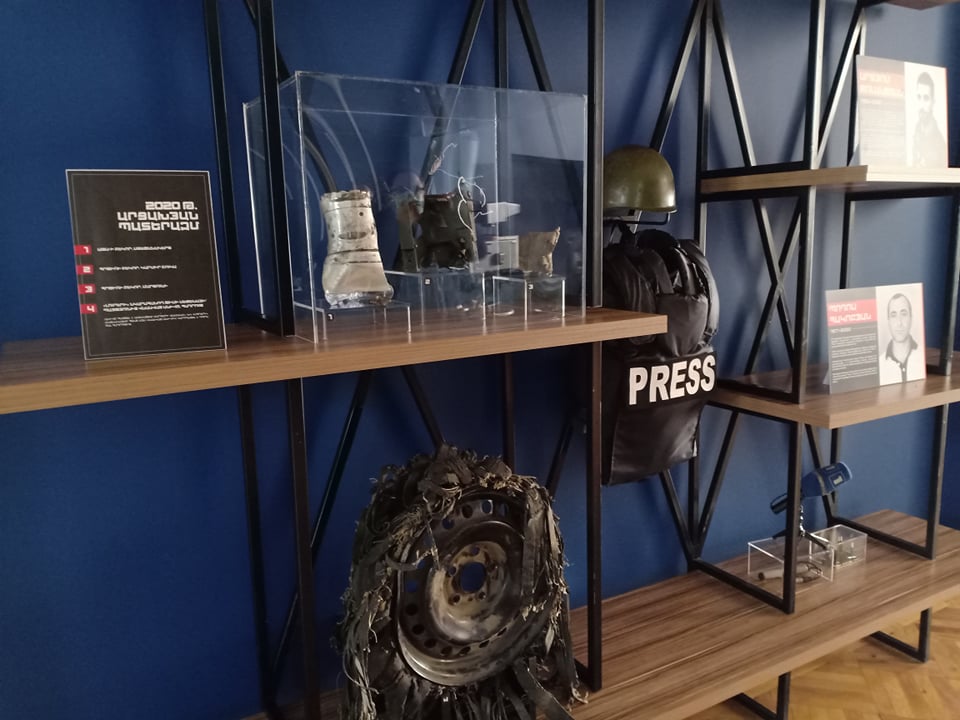 During the Artsakh war, all media outlets worked in emergency mode. They changed their airtime, the core of the content and tried to present the war from all sides, often putting themselves in physical danger.

Of course, the public’s biggest expectation in this respect was from Public Television.

During the war, Public Television created the opportunity for satellite access for about ten foreign media outlets so that information could also be disseminated throughout international media. They have created a platform in which videos and news on the war were made available to many journalists and media outlets.

On the occasion of the 64th anniversary of the founding of the Armenian Television, a museum was opened in Public Television, where you can find the fragments of shells and missiles that have been brought back from the 2020 Artsakh war,  as well as the wheel of the “News” car that had been damaged by the explosion.

There are also memorial plaques in the corner of the museum, dedicated to Public Employees Artyom Kolanjyan and Poghos Hakobyan, who died heroically while performing their duty to the homeland.

Letters of thanks were received by 18 employees of Public Broadcasting who had participated in the war operations and 44 employees who covered the war.

The organization of safe work

Public Television took care of the safety of its employees before leaving for Artsakh. They were provided with appropriate clothing – helmets, body armor, etc., which they received from Media Initiatives Center.

For security reasons, they always had two vehicles to evacuate quickly if necessary. From the moment of the threat of rocket attacks in Stepanakert, we have created a backup plan for organizing working processes in a safe place, in cooperation with the Artsakh State Emergency Service, leaving the minimum necessary number of employees in Artsakh.

They set up a correspondence point, a mobile studio, where they filmed programs, organized live connections and had guests. To ensure the safety of the team, they had to change their location almost every day.

As there were frequent power outages, Public TV had a generator in Artsakh. There was a problem with the mobile internet connection, the partners of the Artsakh Public Television came to the rescue from the very beginning. They provided Internet access points, as well as channels from information centers.

Initially, they used Public Television’s mobile satellite TV station, through which they organized live connections, etc. A few days after the war, satellite broadcasting became dangerous because of its microwave radiation. That’s why they chose to use Internet broadcasting.

All entertainment programs, TV series and feature films have gone off the air. To date, only documentaries about national heroes (“Always Monte,” “Aram”), heroic pages of the national liberation struggle (“Shushi: Victorious Fortress,” “Four-Winged Victory”) and materials about Armenian cultural figures have been broadcast. Other programs, such as “First Aid” and “Without a Topic” were subject to changes in terms of content.

Direct connections were provided from Artsakh with the participation of the Artsakh government, local self-government bodies, as well as military figures. Every day, the film crews prepared different reports from different settlements of Artsakh, from the front line.

They worked around the clock. The audience had always received operative information about the bombing of civilian objects, as well as the course of everyday life in Stepanakert and Shushi.

The Russian language version of the 1lurer.am website was launched on the day of the war. English media was provided before the start of the war.