Risking Their Lives In Every Moment: What Do The Journalists Working In Artsakh Say? 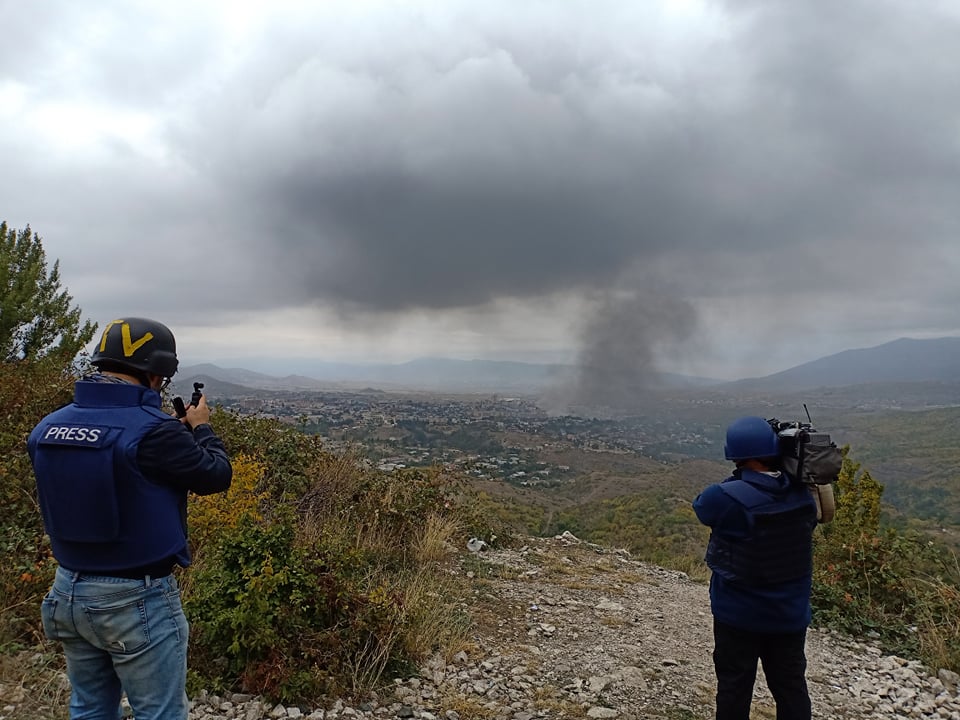 Journalists working in Artsakh during the war say it is difficult to talk about the war when you represent one of the sides. It is almost impossible to cover reality without emotions of fear, powerlessness, excitement.

And always remember that the information you have and want to share with the audience can change so quickly that it can be considered misinformation.

And in Artsakh, which is under constant bombardment, there is simply no safe place where you are protected, and the safety of work is guaranteed.

Members of the Public Television team started working in Artsakh from the very beginning of the war. Several journalists and the technical team provided simultaneous filming at the scene, interviews, and human stories.

Hayk is already in Yerevan. He says that while working in Artsakh it was difficult to control his emotions. On one side the Armenian is listening to you, to whom you talk to about the pain and suffering of your compatriots, and on the other side, there is the foreigner, to whom you should try to present the situation with as balanced information as possible.

Coverage of the war itself is quite a difficult, strict and very answerable job that comes with hyper-nervousness, every-second vigilance, caution, rules for safety, but covering this particular “Artsakh Patriotic War” is even more difficult.

I think we can’t find anyone living and working in Artsakh these days, be it a baker, a driver, or a journalist who does not have or did not have that feeling of fear. It is another matter how much and how you can overcome all that, or if you can at all.

By my example, I can say that I started the “operation to defeat fear” in the very first minute of the war, when Stepanakert was shelled and when we were already targeted by drones on the way to Artsakh.

It was then that I silently asked myself, “You know, right, where you are going? And do you know that people expect information from you?” I answered yes, I started to see, document, talk about and cover the war with my own eyes.

The enemy can unpredictably strike anywhere, not only battlefields, but also peaceful settlements, schools, kindergartens, and hospitals. What should you do when the danger is in the air everywhere? In such cases, we work as fast as possible.

For example, the enemy hit a hospital or a residential building minutes ago, there are wounded victims. We learn about it quickly and we wait a few minutes (depending on the situation). If the same area is not shelled again, observing the safety rules, wearing armor, wearing a helmet, we go to the scene, film quickly, and return. Then send the video to the editorial office.

This is not an ordinary war, some restrictions are made based on our security. Filming is prohibited, especially in areas where active combat operations are taking place.

Only the news services of the Ministry of Defense and Defense Army – Zinuzh and Goyamart TV programs have such permission. It is possible to shoot in combat positions during a relatively quiet period, only with the permission of an authorized body, when the shelling is not very active in that area.

But even if the situation is calm for a few hours, it does not mean that it can’t turn into an active battlefield in a minute. You too can be in the focus.

In general, we mainly plan the work according to the current situation. For example, we find out what the situation is on the grounds and depending on that, discuss with the directorate and authorized bodies and then decide the course of action. We used the relatively peaceful moments to cover the daily lives of the residents.

In fact, there have been many influential moments, because what is happening in Artsakh is almost completely happening before your eyes.

You verify all that, you see, you feel the pain, the sorrow, the mourning; you have to show the whole truth as it is, to the world, but without excessive emotions, which is very difficult.

Let me tell you a story that took place in Stepanakert after several hours of active shelling. We went out to film to see what damage had occurred. About two hours had passed and we were walking down the street when we heard some noises. The cameraman and I looked at each other in surprise and asked each other if we both heard what we thought we were hearing. Is it a piano?

Following the sounds, we went up to an apartment, where a sound director by profession used the moments of a ceasefire to play the piano. He played “Katyusha,” famous from the Soviet period, as well as many victorious songs from the Artsakh liberation war.

“The sound of explosions can not silence the sound of our victory.” It was with that message and title that the material became extremely popular and expected, talking about the winning nature of Armenians.

The Artsakh war has been and continues to be covered by both international and local well-known and newly established media outlets, for which the war seems to have become an attempt to establish a credible connection with the audience.

PersonaNews journalist, Lia has been to Artsakh twice. The journalist, who worked for Armenpress (“Hayastani Hanrapetutyun” daily) for six years, passed one of his most serious exams after moving to a new media outlet. After going to Artsakh for the first time, she realized that it was difficult to cover this war without special training. She returned to Yerevan, took everything she needed, from a warm blanket to dry food, so that she could work at the scene. During the war, the two parallel realities are a good opportunity for Lia to reflect on the nuances of war coverage, journalistic ethics, and other issues. 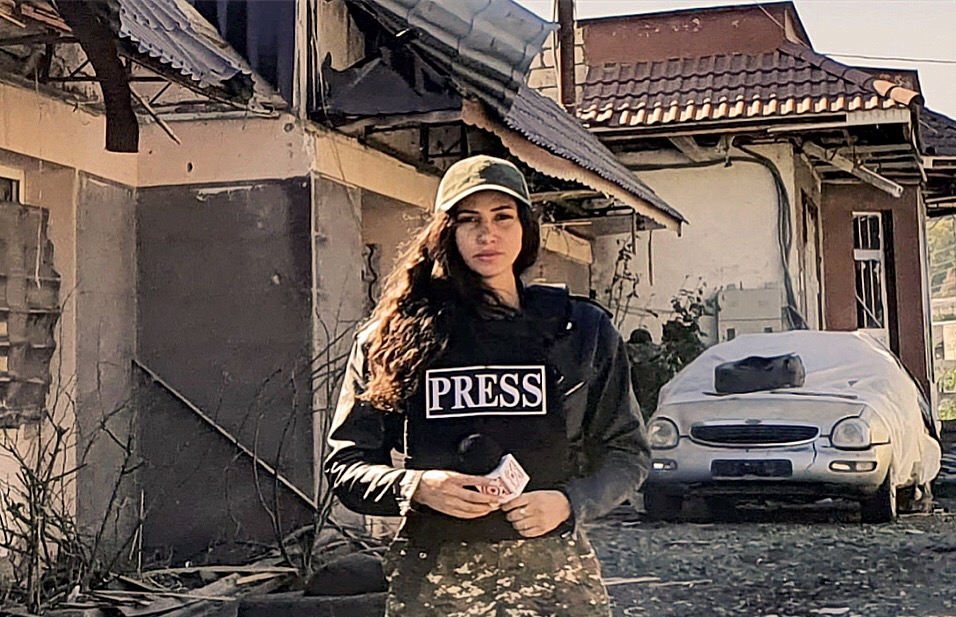 While working in Artsakh, you understand that you must be ready to make changes according to the situation at any moment and make fast decisions. We were able to work from air alarm to air alarm when it seemed calm. It took great courage to leave the shelter and register the rocket-propelled grenades and buildings on the spot.

Unpredictability was the biggest danger, it was not ruled out that the structure that had been shelled minutes ago could be targeted again.

Though we were warned that there was a great danger, we had colleagues in Artsakh who, literally minutes after the rocket fire, went to try to understand the situation and tell their audience what had happened.

During my stay in Artsakh, I did not have any feelings of fear, even when we learned while working in the village of Avetaranots that a diversionary attack was taking place at a very short distance from us.

Journalists cannot work safely in Artsakh. As much as we want to keep ourselves out of danger, in many cases, the course of events leaves us no choice. For example, it was impossible to predict the attack on the village of Avetaranots, we found out about it when we were already in the village, we almost found ourselves in the center of a diversionary attack.

Being organized and making quick decisions is one of the most important skills in covering this war.

The Artsakh Press Center was the initiator in many issues, but if you wanted to go at night to film the rocket-propelled grenade area, it was exclusively your decision, as no one had an obligation to ensure your security. The danger was talked about, but the decision itself is yours.

It is difficult not to fall ahead of the official news during hostilities. Before visiting any settlement, I would definitely look at what the official sources had written about the actions that took place in that area, in order to understand how I should present what I had seen.

We saw a lot, we talked a little.

War is not a protest action for you to know approximately what the outcome will be, war is an evolving event, changing every moment․ You can’t convey the information you have right on the spot. After a few minutes, the situation may develop in such a way that the information you publish does not correspond to reality anymore. Moreover, it can be qualified as a piece of misinformation.

You do not realize for a minute what the danger is in Artsakh. The temptation to inform the audience about what is happening in Artsakh settlements becomes a top goal.

The impression from Yerevan is different, the journalist writing about the war must be in Artsakh, in the center of events, to understand what air is circulating, what emotions are in that area, how people live in a damp shelter. See with your own eyes the crowded market of Stepanakert, where everything is free, anyone can take whatever they want, and there are no people around to take it. To see homeless dogs on the street, who have forgotten their hunger, and like people, long for peace.

As a journalist in Yerevan, I became weak and powerless when I heard what people were discussing, what quarrels were on social networks. Two parallel realities break you as a citizen, then as a journalist.

Now a journalist has a lot to say, and that “accursed” war demands silence.