Report: European Values Are Most Discredited By The Print Media

The media coverage on the topic of Europe in the media is mostly neutral or positive. Negative materials account for only 0.6% of the total number of publications on Europe and Europeans.

According to the monitoring results of a number of Armenian and Russian media outlets conducted by the Committee to Protect Freedom of Expression (CPFE) from September 1, 2019, to April 30, 2020, it turned out that publications discrediting European values were mostly recorded in print media.

Earlier, the CPFE published the interim report on the results of the monitoring of the first phase, which was conducted from September 1 to December 31, 2019.

Recently, the CPFE published the results of the entire monitoring period.

13 media outlets were monitored: 5 TV channels (including one Russian “RTR-Planet,” which covers the entire territory of Armenia by terrestrial broadcasting), 3 national newspapers and 5 online media outlets.

They are media outlets associated with various political forces. Among the TV companies are the Public Television of Armenia, the Russian “RTR-Planet,” the “5th Channel,” “Yerkir Media” and “Kentron.”

During the monitoring period, the manipulations in the media (falsification of facts, distortion, biased interpretation, references to non-existent sources, etc.), use of hate speech and negative stereotypes against national, political, social, religious, racial and other groups were studied.

A total of 208,975 materials were considered, of which about 23% had European topics.

Who are the ones discrediting European values?

It turns out that the publications that discredit European values are mostly in the print media – 53.5% of the propaganda materials, and in the TV channels and online media, respectively, 31.2% and 46 15.3%.

The leader in the number of anti-European materials is “Iravunk” from newspapers, “RTR-Planet” from TV channels, and “News.am” from online media. 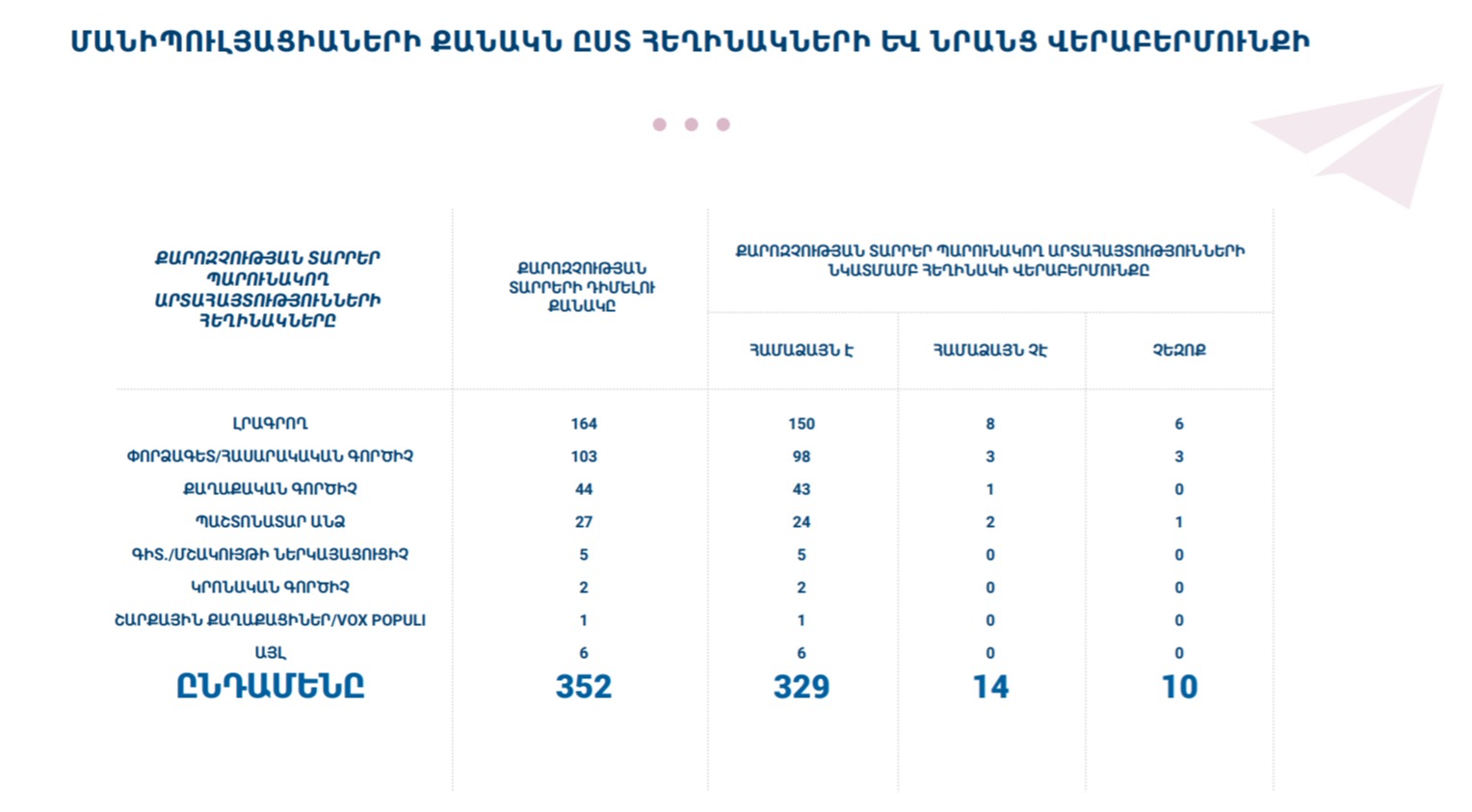 About 74% of the materials that create a negative attitude towards European values are “Iravunk.” No other media outlet has recorded as many stereotypes and manipulations on this topic as Iravunk. Moreover, with the authorship of journalists.

In the materials of “RTR-Planet,” the materials discrediting European values are more than the data of 4 Armenian channels taken together.

The monitoring also revealed that “the most commonly used propaganda tricks is the obvious and biased interpretation of events and phenomena.” It is most often used by journalists (46%), experts/public figures (31%) and politicians (12%).

The second most common trick of information manipulation is to distort the facts. Less than two of these are references to anonymous (presumably non-existent) sources, the spread of hate speech and negative stereotypes. 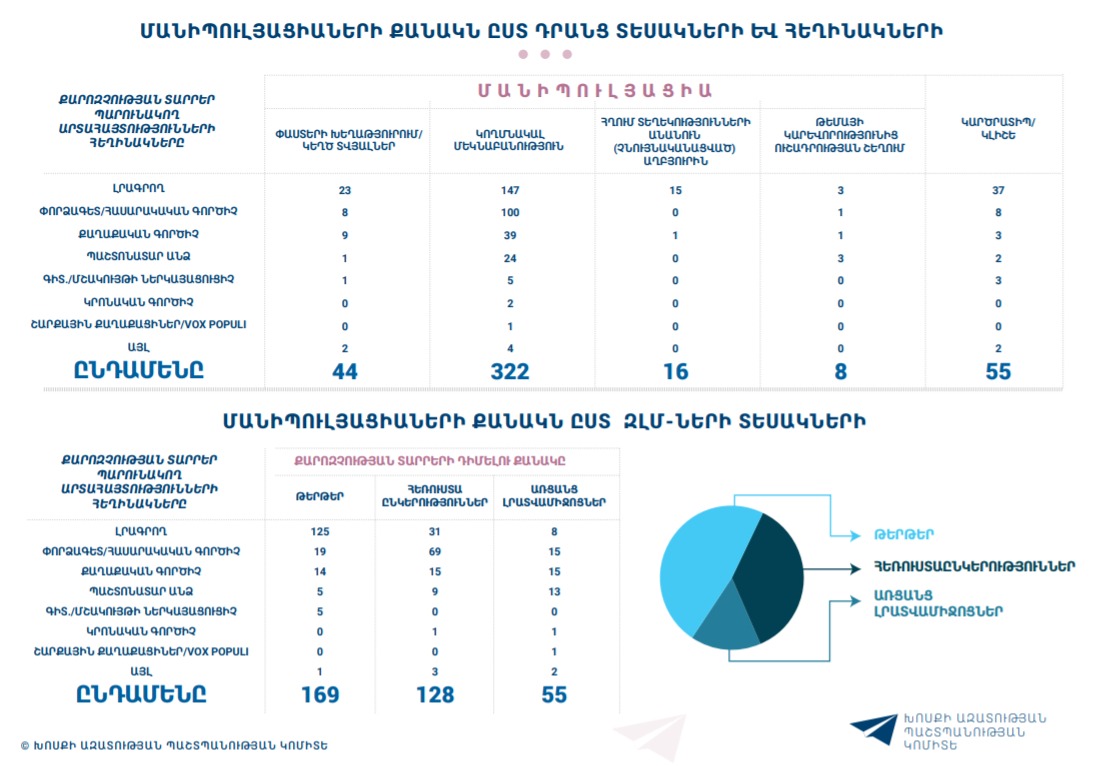 If the number of journalists using the various methods of propaganda is the highest in print publications (74% of biased comments, factual distortion, negative stereotypes), then on TV those of experts/public figures are twice as high.

In online media, journalists have been beaten 2 times more by experts/public figures, and also politicians and officials by 1.5 times.

What were the reasons for the manipulations?

In the first stage of monitoring, the possible ratification of the Istanbul Convention by Armenia was mainly a reason for discrediting European values.

In the second stage, the topic was contagion. Even the coercive measures which were taken by European Union countries (in particular, the closure of the borders) were presented by some media outlets as a renunciation of European values and the collapse of the EU.

The topic of the coronavirus was used by the Russian RTR-Planet TV channel in an anti-European context.

On March 22, Dmitry Kiselyov, the host of the “Big News” program, said, not without malice, “… The Schengen zone collapsed … Germany, Switzerland, Austria and Hungary have established control over their borders. Czech Republic, Denmark, Lithuania. In other words, the Schengen area of free movement no longer exists in 26 countries. In fact, this is the destruction of the European idea…The whole false pattern of words of solidarity, mutual aid, common values, human rights and humanism seems to be blown away by the wind.”

One week later, on March 29, the same host continued his program. “Shengen turned 25 this week. But that anniversary is more like a funeral without border crossings, a painful farewell to the dream of a united Europe … ”