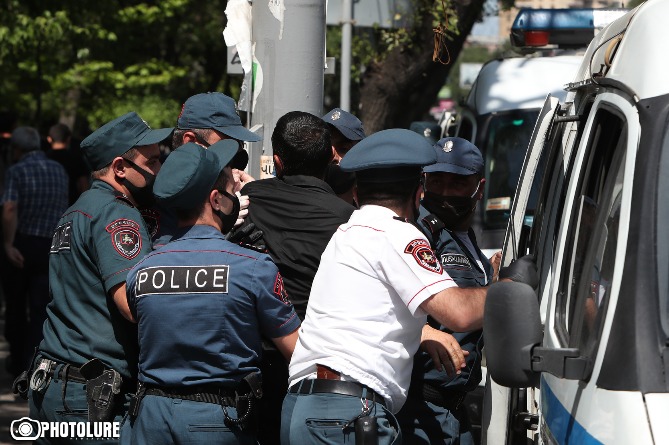 When PAP leader Tsarukyan took to the streets after the interrogation, a mess was created. Tsarukyan was approaching his car, the journalists were walking with him, continuing to shoot footage. Prosperous Armenia supporters, in their turn, tried to approach their leader. The police were also trying to maintain public order.

People were following the developments and how the work of journalists was being obstructed, by watching the footage of several websites and TV channels operating online.

Tert.am journalist Ani Ghorgyan wrote on Facebook that she is feeling well, only her leg has been injured and there is no need to worry.

In a conversation with Media.am, Ani said that during the incident she suffered two blows, one to the leg which was specifically targeted, and the other in the head, which took place by accident as a result of the jostling.

“At that time, we were interviewing Gagik Tsarukyan and suddenly the police took action. Journalists had repeatedly said ‘we are journalists, why are you pushing us?’ There was a journalist who showed their certificate, mine was hanging and was visible to the police. Our microphones were also visible,” said Ani.

According to her, she personally did not go to the police, because after the incident the police informed them that the incident would be investigated. “Besides, deputies from different factions have contacted me. It is also the focus of the Human Rights Defender’s Office and a number of human rights organizations.”

In a statement, the police also urged journalists to position themselves in such a way so as not to interfere with the police and their own work during such events.

NA Deputy Gayane Abrahmanyan, who has been engaged in journalism for many years, apologized to the journalists in connection with the incident and said that she would call the police to find out all the details and the need to conduct an official investigation.

The deputy urged the police not to hinder the activities of journalists in any situation, even in the tensest conditions, moreover, to create conditions for the safe implementation of the journalistic service.

Journalists’ organizations issued a statement on the incident. “We, the undersigned journalistic organizations, condemn any violence against the media representatives who perform their professional duties and demand from the RA Police to conduct an objective official investigation to investigate the incident and bring the perpetrators to justice.

At the same time, given that these events are taking place in the context of a state of emergency, we urge the media to refrain from exposing their staff to the crowds while covering mass gatherings, and to provide clear security instructions if this is not possible.”