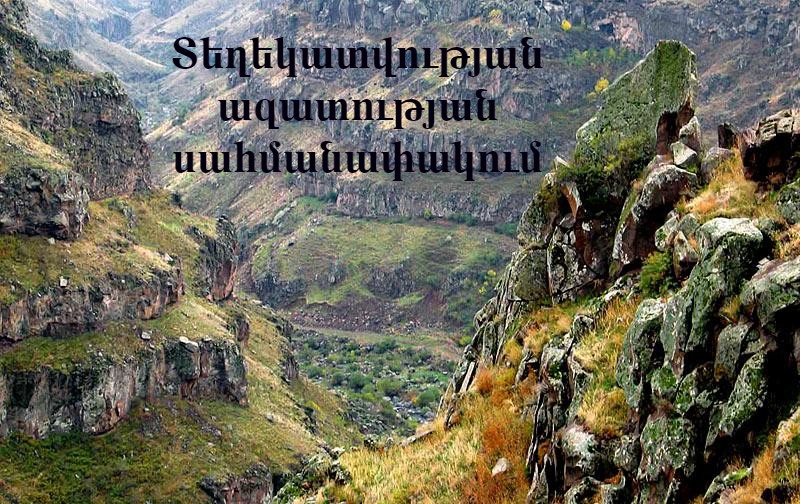 The Ministry of Environment wants to refuse a request for environmental information if it may adversely affect the environment, including the breeding habitats of rare species. The bill on making amendments to the law on Freedom of Information has been proposed to the Government in a form of a non-reportable, secret provision and has been approved at the session.

About 240 NGOs have made a statement, urging to revoke the bill. They are waiting for a response because such an important bill at least needed a greater public awareness.

Shushan Doydoyan, the head of Freedom of Information Center (FOI), says that the most interesting part of the story is about the discrepancy between the bill proposed to the government and the versions presented in e-draft.

“The core issue is the fact that e-draft displays a certain version, whereas a completely different bill (in a non-reportable form) is presented at the government session. It turns out that a certain bill has been discussed by the public but a drastically different one has been presented to the government,” Doydoyan says.

The head of FOI says that the 131 NA MPs have been informed of all the arguments on why this bill is useless and dangerous.

The Human Rights Defender has also presented a negative assessment, mentioning that the bill does not meet the regulations of the Aarhus Convention.

“The phrasing is too general, and it is hard to say what they want to hide or protect with this regulation. However, it becomes clear that any environmental information may be included in this restriction at somebody’s discretion,” Doydoyan says.

According to Doydoyan, the ministry says that they want to protect, for example, the disclosure of information about the breeding habitats of the bezoar ibex, “But there is a lot of open and publicly accessible information.”

Doydoyan explains that discussions related to mining permits are often organized in affected communities. She wonders how citizens will make decisions in case of this restriction if they are deprived of the information-gaining instrument, “How will they learn about the existence of rare species in a certain area and how will they make an informed decision?”

Doydoyan says that the ministry has not received any conclusion from the Human Rights Defender before restricting one of the most essential human rights – the right to obtain information.

Victoria Burnazyan, the editor of Ecolur news site, says that the ministry will have a legitimate reason not to provide information in the future, which may deprive citizens of the opportunity of public control, especially in disputable cases related to subsoil use.

She says that the ministry will be able to hide important information while proposing important environmental bills, for example, on mining, just as it happened in case of Amulsar. Later it turned out that there were rare flora species in that area.

Burnazyan states that the law bans the subsoil use in areas with such plants, “This restriction is not in line with the Aarhus Convention – it’s just an excerpt from the 4th article. This is done to keep us uninformed about lots of processes.”

Burnazyan says that the only information the media currently receives from the ministry is the PR texts and the Q&A of the minister. Meanwhile, the media expects website updates on current projects related to air pollution, forestation and other topics.

“It’s not that only the ministry is informed about rare species. We can obtain that info from the Red List and other sources,” she says.

Narine Solomonyan, the adviser to the Minister of Environment, assures that public discussions over the bill started in 2018, and about two dozens of environmentalists, experts and environmental NGOs were invited to participate in the discussion of the law On Freedom of Information.

“Only 5 or 6 of them accepted the invitation and took part in the discussion. Later, none of them submitted any suggestions when they were offered to express their opinion through an online poll,” Solomonyan says.

She states that the bill has been passed according to the lawmaking procedure. However, it coincided with the state of emergency declared in the framework of measures against Coronavirus. “You cannot call it a hasty decision because nobody could predict the existing situation.”

According to Solomonyan, incidents of thefts were reported from the nesting spots of rare animals.

“Sure, there is general information about rare species in various sources. However, only the Ministry of Environment can satisfy or refuse the request for specific and accurate information about the nesting spots of a particular species.