The informal Armenian-Azerbaijani dialogue should proceed in parallel with the official negotiations.

This conclusion was reached at the Yerevan Press Club at the 2018-2019 “Yeni Nesil,” in cooperation with Azerbaijan Union of Journalists, after the results of the research “Armenia-Azerbaijan: the search for new opportunities for dialogue.”

According to Boris Navasardyan, President of the Yerevan Press Club, the participants of the negotiations on the Karabakh conflict settlement should take certain commitments not to interfere with and facilitate communication between the independent structures.

“One of our suggestions was to discuss bilateral informal relations on the agenda of the meetings,” said the head of the Press Club.

Another part of the survey (in English and Russian) relates to media monitoring. It was held simultaneously in Armenia and Azerbaijan in 2018. September 16 to October 15 and November 16 to December 15.

Four online media outlets from Armenia and Azerbaijan were selected for the monitoring.

According to Boris Navasardyan, the most popular media, interested in the Karabakh issue and the Armenian-Azerbaijani dialogue, have different political orientations.

The main topics of the publications

According to the survey, most of the Armenian media covered the issue of compromise settlement, the positive impact of changing the political situation in Armenia, monitoring of the line of contact, withdrawal of snipers from the front line. There have been many publications that the conflicting parties are Armenia and Azerbaijan, and that Karabakh’s involvement in the negotiations is impossible, as well as that the OSCE Minsk Group has no alternative.

Azeri media outlets exclude reports on the positive impact of political change in Armenia. They have written that the conflict can be resolved only with the intervention of external players, the Minsk Group format has no alternative, the key to the Karabakh conflict settlement lies in Moscow. A more preferable and effective solution may be a peaceful way of mutual concessions. 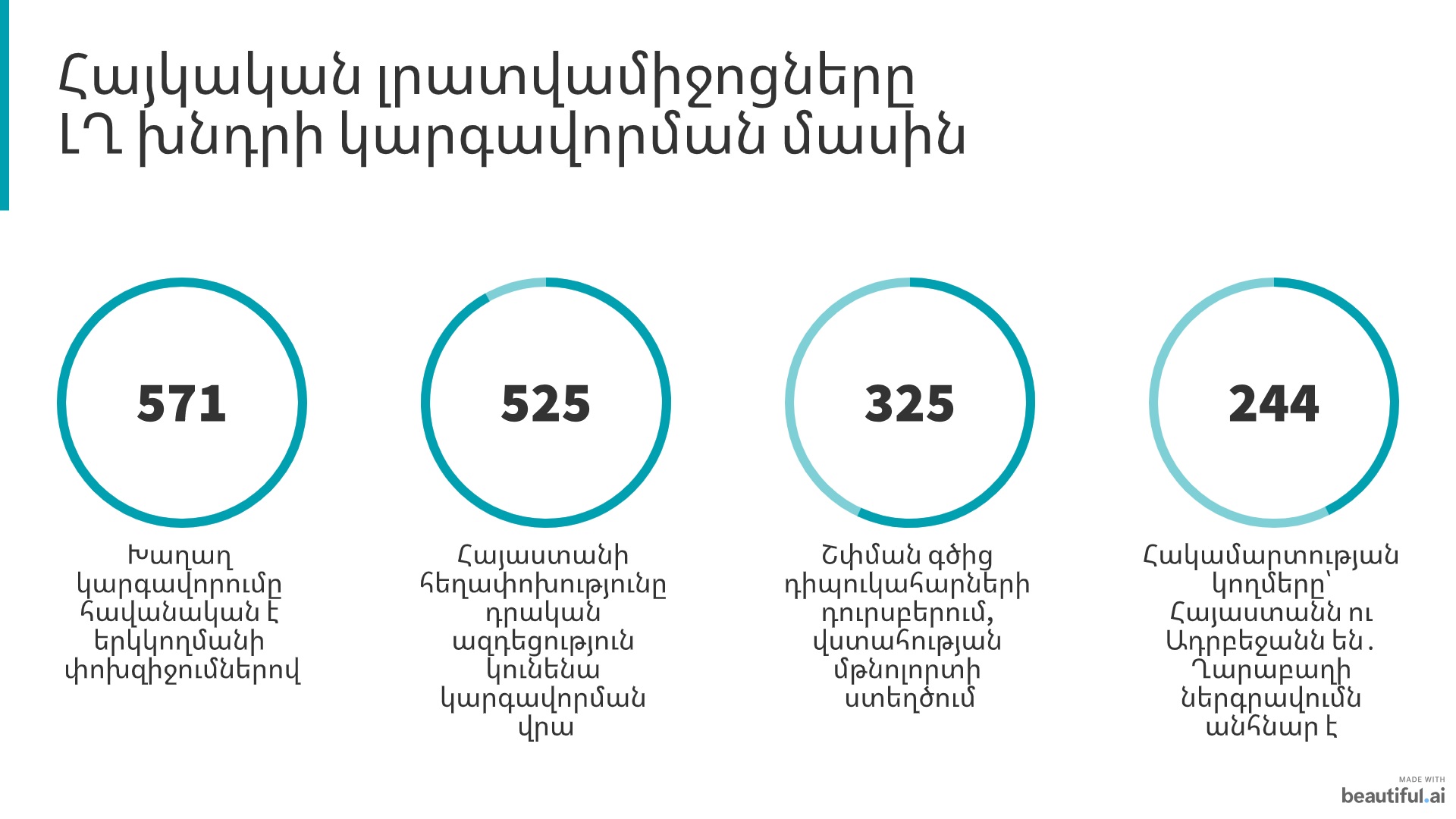 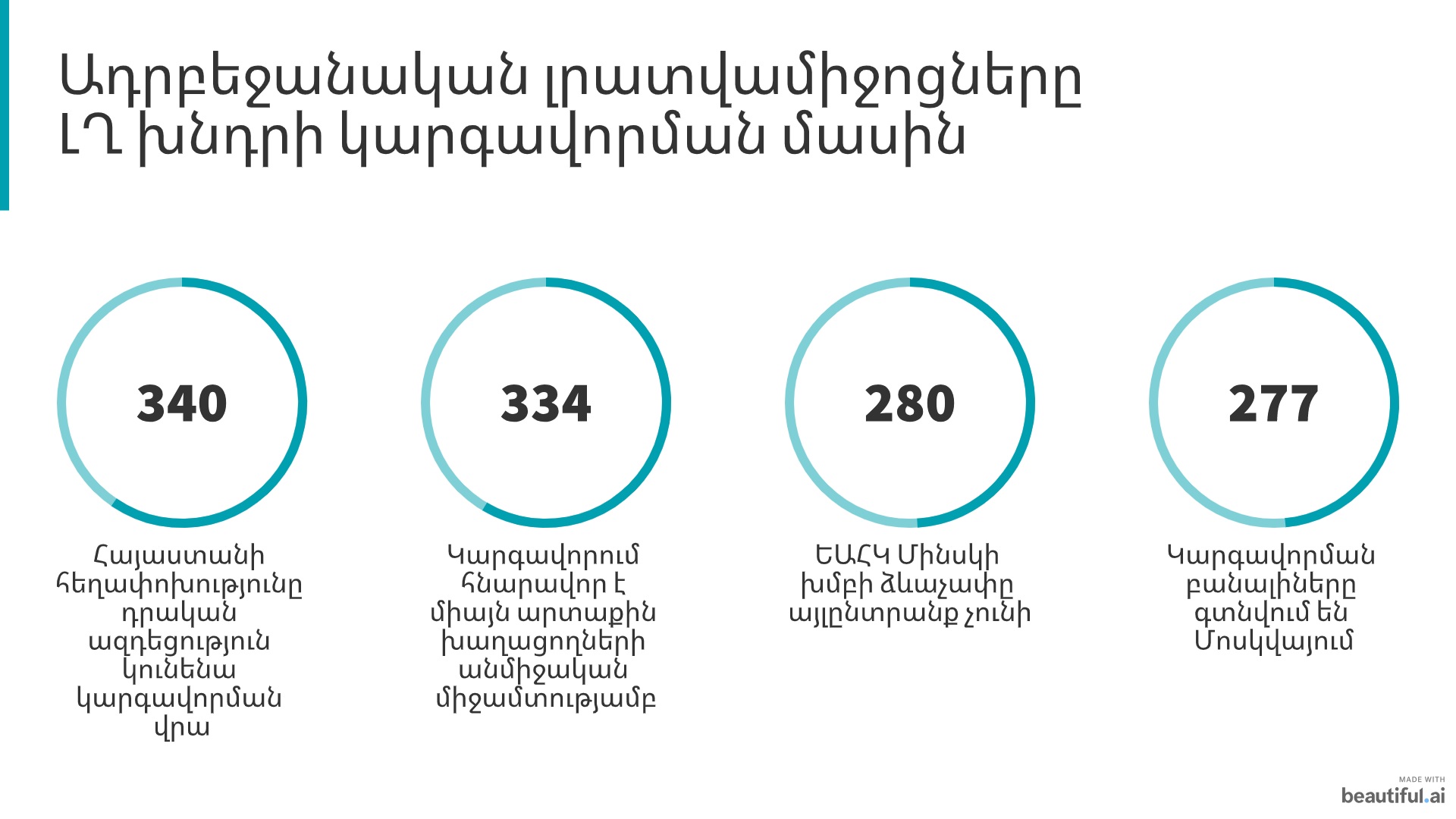 The monitored Armenian media has reported 40 times that foreign journalists and civil society representatives should move freely and have security guarantees in the conflict zone. This number is three times higher in the Azerbaijani media and there are 126 posts on the subject.

In a state of conflict, the media must maintain objectivity and uphold ethical norms without being involved in an information war. There was only 1 publication about this in the Armenian media, and 3 in the Azerbaijani media.

In the media coverage of both sides, there has been no publication about the fact that the interaction of media representatives of Armenia and Azerbaijan, in a situation of national unrest, is a threat to national interests.

There have been only two publications on the effectiveness of the cooperation of the conflicting journalists and the exchange of reliable information, both in the Azerbaijani media.

The role of the media in the resolution

Half of the Azerbaijani officials participating in the in-depth interview said that the task of the media is to defend the statehood, counteract the adversary’s informational influence and spread patriotic feelings. They also stressed that journalists should not disseminate unconfirmed information that could weaken the country’s defense capability and should not disclose military secrets.

The rest of the officials said that “the conflict must be covered truthfully,” the media “should not ignite passion or become an additional source for provoking the population.”

The majority of other groups of Azeri participants consider the main mission of journalists to be the “operative and high-quality presentation of the reality.”

Representatives of the expert community and non-governmental organizations say the media are highly ideological and contribute to the arousal of passion. Participating journalists and active users of social networks more positively assess the role of the media, although they acknowledge that there is an influence on the media by government agencies.

Some Azerbaijani journalists echoed the views expressed by officials, while others agreed with the opposition.

Interviewees noted that the media can only facilitate dialogue with credible coverage of events.

The Armenian participants in the in-depth interviews almost unanimously admitted that the media could have a positive impact on the settlement of the conflict, but in practice, they were largely politically influenced and serve as a propaganda tool in the Karabakh issue.

Moreover, it was expressed that “it would not be right to expect another response from Armenian media in reaction  to the spread of hostility by Azerbaijan.”

In other thematic discussions, some participants on the Armenian side have emphasized that the media in Armenia can have a positive impact on the settlement of the conflict, while in Azerbaijan, where an atmosphere of hostility is created, they cannot.

The topic of discussion was the creation of a professional joint charter for journalists of the conflicting parties. According to many participants, it may ease the tension of the Armenian-Azerbaijani “information front.”

Proponents of this point of view believe that international organizations, which are somehow related to the settlement of the Karabakh conflict, should initiate the creation of such a charter.

On the other hand, there were many opinions that the initiation of a professional journalism code is meaningless and that no one will follow these ethical norms. Especially that such codes are not applicable to social network users.

Many Azeri participants have stated that the charter will only be relevant after the political settlement of the Karabakh conflict.