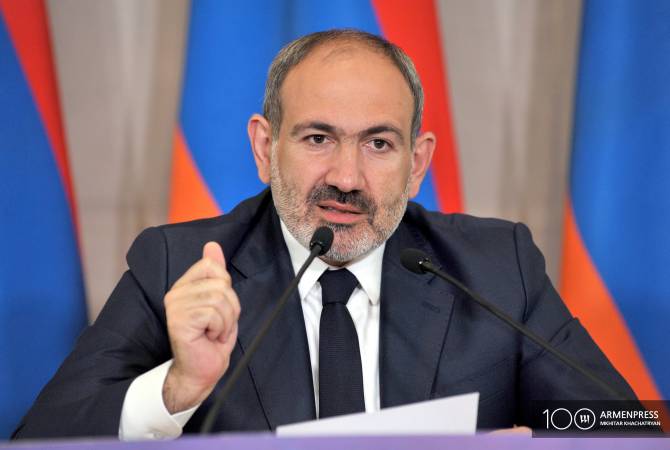 On May 8, Armenian Prime Minister Nikol Pashinyan convened a press conference, the fifth one in his one year in office.

Pashinyan mentioned it several times as one of the proofs of freedom of speech and transparency and accountability of the new authorities.

“I have made given five extensive press conferences, responding to numerous media issues on numerous occasions… Any journalist can ask the Prime Minister of the Republic of Armenia any question.”

Moreover, not only journalists but also every citizen of Armenia can do so through direct contacts, meetings or Facebook.

Nikol Pashinyan pointed out 100 facts about the new Armenia, including the improvement of Armenia’s position on the World Press Freedom Index.

According to the results of 2018, Armenia has made progress with 19 points and is on the 61st place.

“The press is more free in Armenia than it ever has been,” he repeated.

Among the 100 points, one referred to the happiness index. According to the data published on October 31, 2018, out of 190 countries, Armenia moved up from the 47th place to the 41st.

Most of the questions given to the Prime Minister at the press conference were about the super prime minister.

Pashinyan replied, “No. Certainly not, because the most important component of democracy is that Armenian citizens can freely express their opinion. And I am not going to defend myself (quite literally) from criticism. Let the citizens of the Republic of Armenia hear all these criticisms… On the contrary, it is good that all these critics are present.”

According to the Prime Minister, the role of the judge should be taken by the people. Let them judge…

“And they are spending financial means, let them spend,” he added.

Pashinyan has confidence that we should be the leader wherever we can. For example, in the field of freedom of speech.

“We must be the world’s leading country in terms of freedom of speech and freedom of the press. In all respects, in terms of rule of law, transparency, and freedom from corruption… But there is a delicacy. I will never allow publicly false information regarding myself or my family…

If you’ve noticed, I’m responding to many things and getting feedback on feedback. They ask why I react to such things. For a very simple reason, because the truth is important to me. It is important for a citizen of Armenia to know the truth. My principle has always been this. No news, no rumor will remain unresponded to. Maybe it is possible to let it accumulate, and not respond every day at every moment, but at x moment.”

When asked about the authorities’ mistakes, he said that the important thing is not to be insured of mistakes (it is not possible) but to be free of deliberate motives.

“As long as there are no malicious and insidious intentions, we have not allowed for irreversible strategic errors.”

At a press conference that lasted more than five hours, Nikol Pashinyan said with a smile,

“I’m not in a hurry. To be honest, it wasn’t my dream press conference today. My dream is that the last journalist will leave, no one will be here anymore and I will be the last person to leave here.”

He announced that there is a desire to organize the next press conferences in the provinces. For example in the Shirak province.