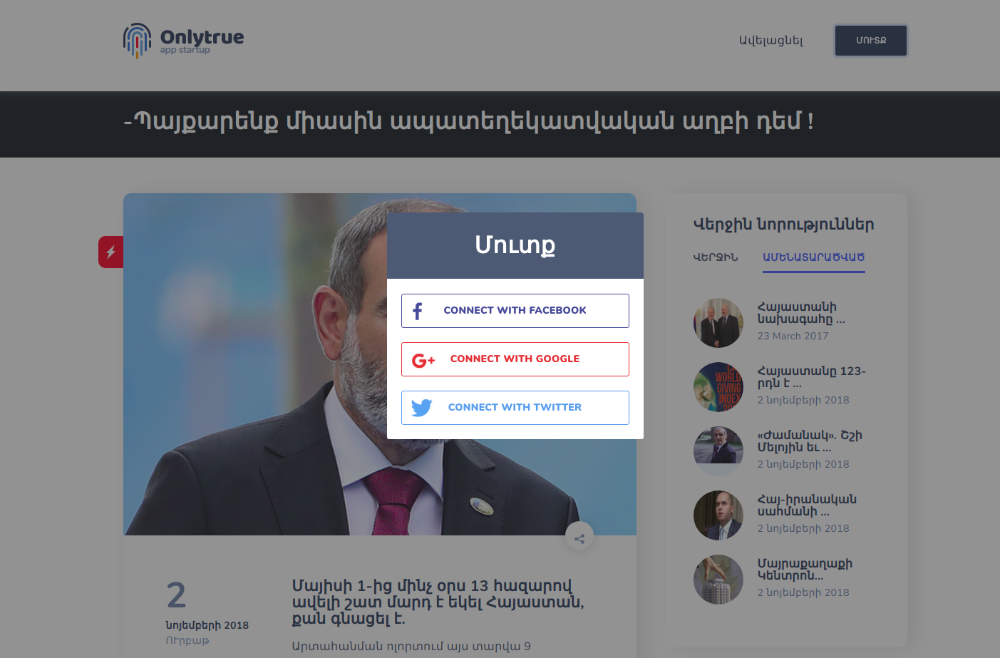 A small group of programmers are developing a new web application, which will help to find out whether the articles or information posted on websites are false or factual.

The co-author and developer David Pedanyan has stated that despite the increased interest of citizens towards political processes and media over the past half a year, the audience lacks awareness and needs to  be able to distinguish the difference between the reliable and unreliable.

Journalistic materials will be assessed by a group of experts including political scientists, diplomats, journalists etc., who will be authorized by the developers of the program, as well as by anyone who registers in the application and if they wish to, can indicate the trustworthiness or unreliable state of this or that information.

Assessments about false or factual information will allow the audience to differentiate the information flow, recognize reliable and unreliable media, and the app will automatically assess the credibility of the information in the future based on the same principle.

“The beta version of the app works with the help of people. This is done on purpose, because our society is actively engaged in politics, it follows, analyzes, assesses and so on. The information struggle is great. The group of selected experts should have public confidence. But the expert group ratings will be less important when rating news or an article. The deciding factor will be the assessment of ordinary readers,” explained David Pedanyan.

If at the initial stage the app will analyze how people evaluate the articles, then later, based on the same principle, these settings will be automated. The app will calculate, think, become educated, be able to learn from its mistakes, recognize the different styles or changes in signatures of authors, and explore new spheres.

The more negative reviews news outlets receive on different articles, the lower their overall rating will be in the system. App users will be able to assess the authors of articles.

In the future, the developers will place tools that will be able to identify the same holding or owner’s sites and those separate ratings will affect the ratings of other websites which are a part of the same holding.

Pendanyan interprets the goal of this. For example, if a business or holding company has  a well known website with high ratings that provided reliable information, and at the same time websites which solve a specific problem, for example black PR towards a political opponent or providing a service to a narrow group, this will be reflected in the app.

If a group of journalists work in two directions, in one place they write reliable information, in another place they take orders and publish fraud, this will affect the author’s reputation.

Assessors should be registered on social networks. This is done in order to avoid an attack of fakes. Whenever there is a rating for any item, their social networking information will automatically be checked. In the case of discovering fake users, their access to the app will be blocked.

The beta version of the application will be launched before the start of the parliamentary snap election campaign. At this stage, it will act exclusively on the people’s assessments.

“We want to use the fact that everyone has suddenly become a “political scientist” during this stage, in order to develop this app,” said David Pedanyan.

Users will be able to read the news and receive news updates in the app, and if they wish, have the chance to assess publications and form a list of trusted and unreliable media outlets.

The app will have a mobile versions in both iOS and Android operating systems.