Why Sut.am Has Removed, Edited And Republished The Material 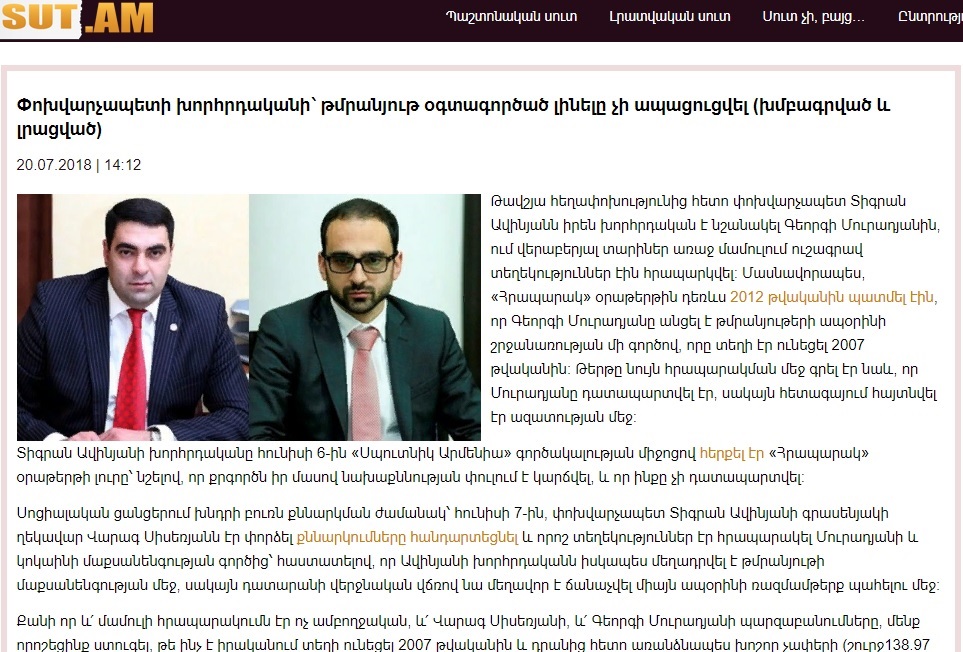 Last Friday, an already published article was temporarily removed from the website sut.am, which has the ambition of being the leading fact checker in Armenia.

The site’s journalist Tirayr Muradyan’s article was about the adviser to the Deputy Prime Minister, Georgi Muradyan, who has somehow been involved in a criminal case on drug smuggling and has been registered as a drug trafficker.

Tirayr Muradyan decided to investigate this news published in another news outlet.

From the Judicial Department, having received archival documents from the Criminal Court of Appeals from the Yerevan Court, the journalist from sut.am made arrangements with Georgi Muradyan for an interview.

The official agreed, on the condition of receiving guarantees for a multilateral material. The journalist said that during the interview Georgi Muradyan did not avoid talking about the piece, whose publications were the beginning of this story. The official did not warn the journalist that his registration in narcotic facilities wa important for him in terms of confidentiality of personal data.

“In order not to aggravate the situation more, I agreed, but on the condition that the article is read exclusively by Georgi Muradyan, and even then, only one part of the interview. The article had undergone substantial changes, and much of what I consider to be important parts have been cut out. A few hours after publishing the material, it was removed from the site,” says Tirayr Muradyan.

The journalist thinks that there was pressure on the part of Daniel Ioannisyan.

In our interview with Tirayr Muradyan, he said that he wouldn’t mind if the editorial office discussed the contents of the material, if there were suggestions regarding this or that piece in order to ensure multilateralism and impartiality.

The problem, according to the journalist, was to make changes to the article without his agreement and to remove the article from the site.

Ioannisyan says that he was not pressured by anyone and that the reason for removing the article from the website to ensure multilateralism and to prevent misinformation.

“As the Coordinator at the Union of Informed Citizens, I prevented the spread of material that created manipulative perceptions on the site that was not directly under my jurisdiction, and after having added facts and making it undoubtable, I reopened the publicity of the material,” said Ioannisyan. This refers to  the fact that the article was published again, but with additions. Ioannisyan does not consider this addition or the removal of the article from the website to be a form of censorship.

In the new version of the article, in postscript, it says that the sut.am editorial office does not have enough evidence to claim that Muradyan used drugs, since the forensic medical expertise conducted in the 2007 criminal case had been mutually exclusive and there was no court judgement that would have proven the fact.

The title of the article had also been changed “Deputy PM’s Adviser Registered in Narcotics Dispensary” has been replaced  by “The Deputy Prime Minister’s Adviser, The Use of Narcotics Has Not Been Proven (edited and enriched).”

“The reader is objectively put under the put under the impression that we are insisting that Georgi Muradyan has used drugs or s a drug addict. But we have no basis to insist that. Muradyan didn’t deny that he was registered in the narcotics dispensary, but that doesn’t mean that he used drugs. While in our article, especially the title, left an impression, that that is the case. That is why we included dry  matter facts in the improved version of the article, so that the reader has clear impression of what we claim and what we do not. Accordingly, the title was modified,” said Daniel Ioannisyan in a conversation with us.

Tirayr Muradyan clarifies that Georgi Muradyan had undergone two examinations, of which the results of one had been positive. It was on the basis of this that he was registered in the narcological dispensary.

To the question, why was the article removed from the site without discussing the material with the journalist, Ioannisyan replied, “It’s not that I am innocent about that, but the question is: the media is the publisher and the content owner of the article. Although the journalist is signing, the publication belongs to the news outlet.”

Georgi Muradyan also commented on his Facebook page that both he and the Deputy Prime Minister, Tigran Avinyan, did not mediate the article to be removed from the site. “We value the importance of freedom of speech and the press, so we try not to interfere with the activities of free media.

As for the comments I made in the interview, I again reaffirm it, as, being a government official, I am committed to working fully, transparently and publicly. I have not tried and will not try to hide anything about any incident or issue that concerns me, and I will not try to hide anything or mislead or citizens. The best proof of what I am saying, is that I have never commented on the news outlets to clarify any question that concerns me or is addressed towards me.”

He called on all journalist organizations to not ignore this incident. “Journalists should not be censored under the guise of positive public austerity to the members of the new government, and I need your help on that issue.”

Ashot Melikyan, Chairman of the Committee to Protect Freedom of Expression, interviewed Ioannisyan and came to the conclusion that what happened was the outcome of  editorial work. The CPFE leader said that the shortcomings in the article should have been repealed by Ioannisyan.

In Ashot Melikyan’s opinion, the Deputy Prime Minister’s Office tried to clarify the journalist’s work. “The new authorities have yet to clarify their relations with the media, equating them with the demands of democracy,” Melikyan says.

Asked what the limits of the confidentiality of personal data of public figures and citizens, Ashot Melikyan replied, “The Deputy Prime Minister’s advisor is already a government official, in which case personal data is not so secondary. The Deputy Prime Minister’s advisor has the opportunity to influence decisions that pay a role in public life. Hence, his personal life may already be under a magnifying glass.”

According to Ashot Melikyan, being registered in narcotics is not purely personal data and has public significance.