The Velvet Revolution on the Pages of Football+ 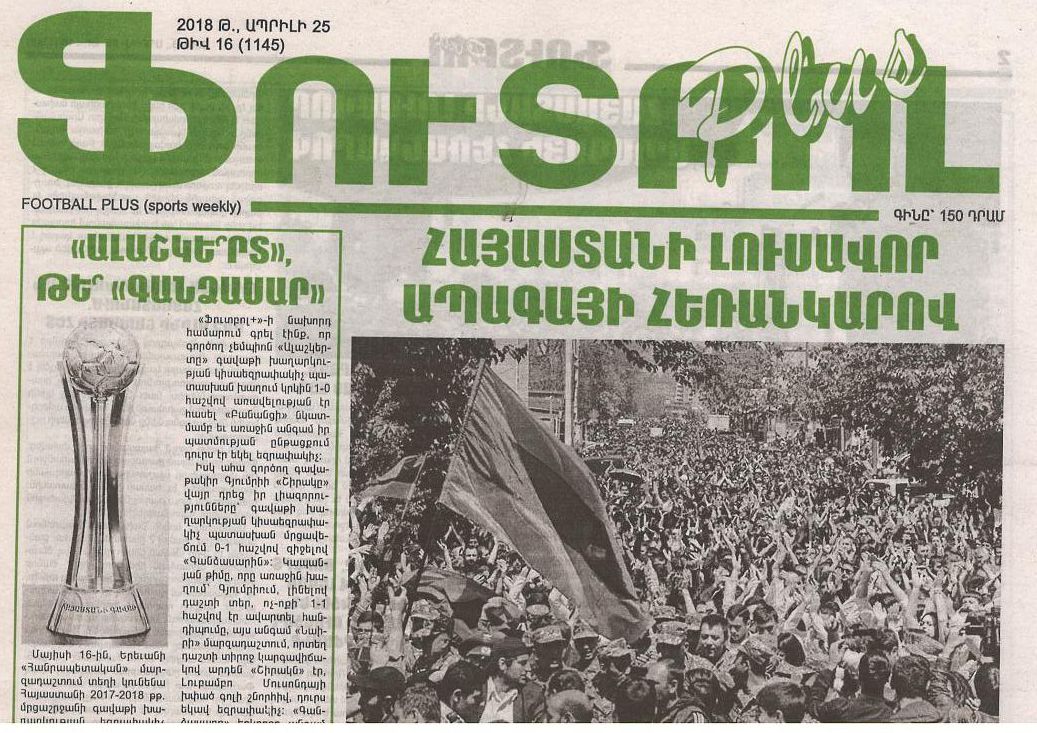 “Our people have become convinced, that getting rid of tyranny in their own country is more difficult than winning a war,” this statement is not at all in the Armtimes or Times or Chorrord Ishkhanutyun newspapers. The April 25 issue of Football+, which was published two days after Serzh Sargsyan’s resignation, on the day that Nikol Pashinyan announced the start of the Velvet Revolution, was sprinkled with political texts.

Two pages of the newspaper were political, including an editorial, which was filled with characteristics of political journalism analyses and assessments. “The fist-like united revolt of Armenians over the course of 11 days, the Velvet Revolution, with the leadership of Nikol Pashinyan, was crowned a success. This time the successful result of the revolt of our people was due to the fact that Russia did not attempt to interfere in our internal affairs. Our people have become convinced that getting rid of tyranny in their own country is more difficult than winning a war,” writes editor-in-chief of the newspaper, Suren Baghdasaryan.

Baghdasaryan openly spoke about the enthusiastic wave of revolutionary events from the so called closed pages of the Armenian National Football Team, writing that the relations between Henrikh Mkhitaryan and Yura Movsisyan are strained. This is allegedly  internal and old information which sports media prefer not to talk about.

The 15th, chess page of Football+ was also political.

The article titled Aronian And His Teammates Were Beaten served to talk about  the chess men’s team’s statement whereby Levon Aronian, Smbat Lputian other chess players of the team still defended Serzh Sargsyan.

“If you are unable to cross sides to the people, then openly supporting any individual, whoever they may be, is not justified. If Smbat Lputian is Serzh Sargsyan’s right hand man and the first vice president in the Chess Federation, he also entered into politics, by becoming a member of the council, he had to sign a pre-made statement to prove his loyalty to his master in difficult times, then Levon Aronian and other gandmasters did not need to support he who set up slavery in our wonderful country, Serzh Sargsyan,” reads the article.