What Happens When You Try To Get “Money From Thin Air” 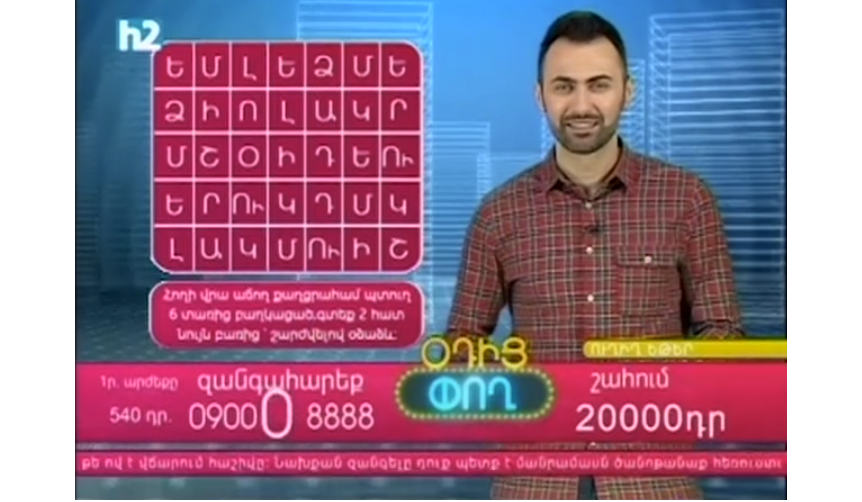 Money From Thin Air is a two-hour-long program, that any audience member can participate in, in order to earn or lose money.

During the game show, broadcasted on H2, the host usually gives simple questions (an example of such a question is, what is woven using wool? The answer being, a rug). In order to answer the question, the audience member needs to call using the number shown on the screen, and pay 540 AMD per minute for the call.

The sum is calculated from the moment of making the call. On live TV, the computer randomly selects one of the callers, who is given the opportunity to answer the host’s question.

Victims of Money From Thin Air

Resident of the village of Gargar in the Lori region, Gayane Galoyan, was shocked, then suspicious then brave enough to call, in order to answer the simple question given by the host, but not only was she not able to connect to the host, but she also lost a lot of money.

In her opinion, Money From Thin Air placed her in a trap and has decided to complain to the police, the ombudsman’s office, and then the prosecutor’s office. Her complaint is now under investigation.

“I would like to draw people’s attention to the problem, and I call on them to stay away from that robbery. I do not believe the excuses given by the game organizers, according to which they supposedly are not in violation of any laws,” said Gayane.

She believes that the behavior of the mobile phone operators is suspicious. To call her son in the army, she bought a card with a sum of 6200 AMD, of which 3000 AMD is dedicated for phone calls.

The incident took place in October 2017. Gayane lost 17,200 AMD in order to win Money From Thin air. She decided not to pay….

As a result of not paying the amount, extra fees have been applied, causing the total to reach about 60 thousand AMD. The phone number has been deactivated.

Family Protection NGO is actively working to protect the rights of those who have suffered as a result of participating in the Money From Thin Air program, by applying to law enforcement agencies, providing consultations, etc.

Dozens of audience members have written to the NGO, claiming that the television game misleads people with primitive questions. Those who are ready to answer the question, make the phone call, hoping to connect with the host, but instead are placed on standby mode. Out of many phone calls, the host only answers one.

The remaining callers who are placed on hold become victims, from their perspective, they become the victim of deception, as they start to lose money from the moment that they make the call, sometimes leading to a loss of up to a hundred thousand AMD.

Even those who are successful winners lose money. For example the winner might get 20 thousand AMD, but due to the cost of being placed on hold, spend 5000 AMD.

NGO Chairman Armen Yepremyan says that even citizens who have won write to the organization with a complaint, whereby the winner is, to put it kindly, escorted out of the TV company building, without having been paid their winnings.

“The citizen asked to at least be exempt from having to pay the phone charges, but in vain. We have written the National Commission on Television and Radio on the basis of a number of written complaints, as we have noticed legal omissions in the law,” said the NGO Chairman.

The ombudsman’s office has also been involved in the issue, and has proposed changes to the Law on Television and Radio based on the complaints. Since broadcasted gambling games on television and radio is not legally regulated, in practice it becomes cause for the violation of rights.

Since the letter has remained unanswered, the NGO advised victims to apply to law enforcement agencies.

Another case against Money From Thin Air is being prepared at the Mashtots Police Department.

Is there a violation of the law?

According to the opinion of the expert on information rights, David Sandukhchyan, the program Money From Thin Air can be described as a gambling game, since under the law “any automated or live game that creates a chance for winning something” is considered a gambling game.

In his words, the actual invitation to play the game is prepared quite soundly. They have taken into consideration almost all the possible risks. As to what extent the organizers act honestly, the court can judge, since the topic is about the interpretation of the law.

“The organizers call their program a quiz, but it also contains the features of a gambling game, since the right to participate is given in exchange for payment and on the principle of being randomly selected,” he explains.

Sandukhchyan also has doubts about licensing, however the Ministry of Finance explains that the game doesn’t have a license, because it is a quiz.

“The quiz is not considered a matter of regulation according to the law on Gambling and Casinos, as it is being organized on television. It is also not a lottery, because according to the Law on Lotteries, the winnings depend on the actions of the participants, and they are not the result of chance,” said a representative from the ministry.

According to H2 television station’s explanation, that since the very first episode of the program “a number of notifications and warnings were made in order to prevent audience members who are unaware or incapable of paying from making calls as much as possible.”

“As with any game, when there are winners, naturally, there are also losers and viewers who are disappointed from losing, which we also consider natural,” said representatives of the TV station, referring to criticism regarding the program.