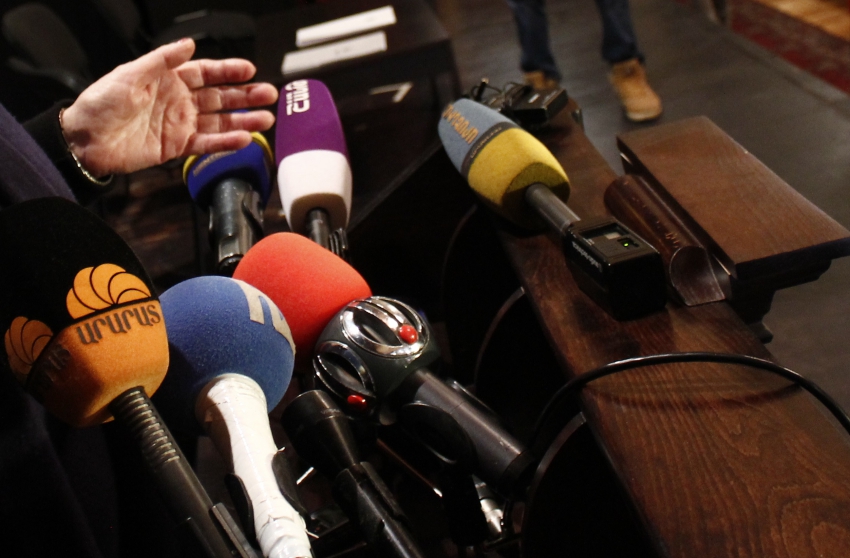 Editors and pundits with dozens of years of experience in Armenia’s media industry shared with Media.am readers the criteria and values they consider important for journalists and workers.

Long-term editor of Azg daily newspaper Hakob Avetikyan separates the Armenian press of Armenia’s independence into three periods: “In the first years, journalists, especially the bold ones, were subjected to beating, which further strengthened people. The second decade was a period of money and bribery, which not everyone from the coming generation withstood. But during that time something else happened: a number of professional, established journalists accepted positions, mainly, as press secretary and so on. And not everyone survived in the field. The third period is more horrible: it’s the period of indifference toward criticism,” he says. 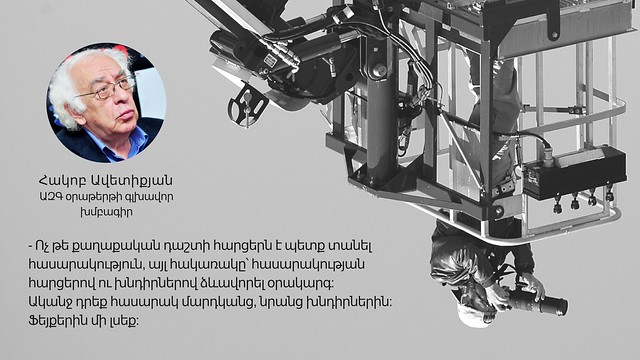 Today’s press, in his words, no longer guides the public. In a negative sense. Moreover, it shapes the public agenda not from issues coming from governing bodies from the public, but by topics imposed from the political arena.

“Create a journalism according to public issues, not the agenda dictated by politicians, which is sometimes fake. Politicians are not a source; if they are a source, then partly. It’s not the political field’s issues that you have to take to the public, but the opposite: take the public’s issues and problems to the agenda. Listen to ordinary people, their problems, study the public transportation issue, and so on. Don’t listen to the fakes,” says Avetikyan. 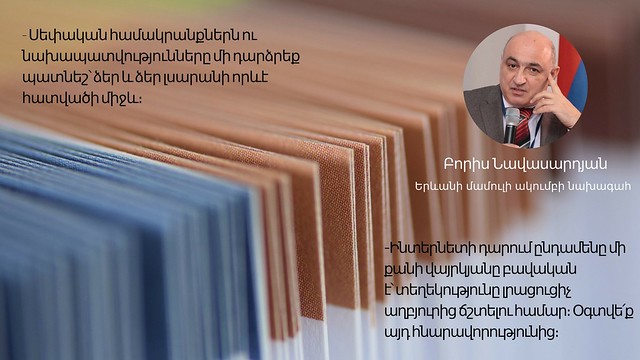 Yerevan Press Club President Boris Navasardyan draws attention to the issue of the reliability of information circulated in the sector. Particularly the information in breaking news stories, in his words, don’t inspire confidence. Navasardyan says that if the topic, the story is important or interesting, the reader is often forced to verify the information from other sources, thereby doing the journalist’s job. But, if you’re a professional. Otherwise you fall victim to misinformation.

Navasardyan urges journalists not to make their own sympathies and preferences into a wall between them and the audience. Otherwise, the journalist is engaging in propaganda, PR, and advertising. 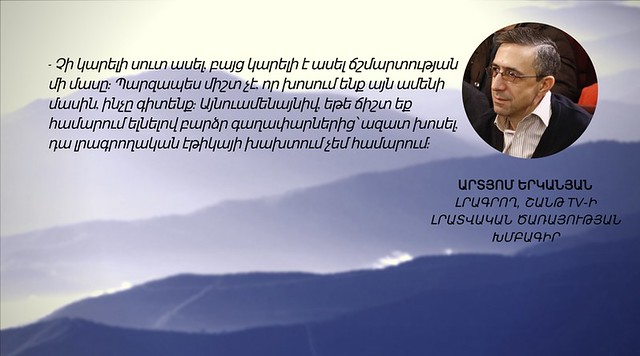 One of journalist and Shant TV news service editor Artyom Yerkanyan’s principles is “Do no harm.” This is about not harming the interests of your own state, especially if this country is at war. But, according to the journalist, you shouldn’t confuse this with propaganda.

“The journalist has citizenship and is a citizen of a specific country. Since Armenia is a country at war, you must always consider the so-called national interest. This doesn’t mean engaging in propaganda. You simply have to reckon with your inner editor. You can’t tell lies, but you can say one part of the truth.

“It’s not always that we talk about everything we know. Nevertheless, if you consider it right, based on lofty ideas, to speak freely, I don’t consider that a violation of journalism ethics,” says Yerkanyan. 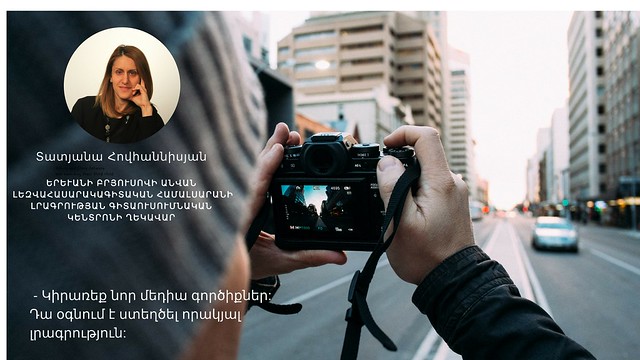 Head of the Center of International Journalism at Yerevan Brusov State University of Languages and Social Sciences Tatyana Hovhannisyan considers important to respond adequately to rapid changes and use new media tools for quality journalism.

“The media sector today develops and changes at tremendous speed. It’s very important in the digital media age that journalists are able to get out of the profession’s traditional confines and be ready to spend time to constantly update knowledge and acquire skills to work with new media tools.

“The use of new media tools helps to create quality journalism,” says Hovhannisyan. 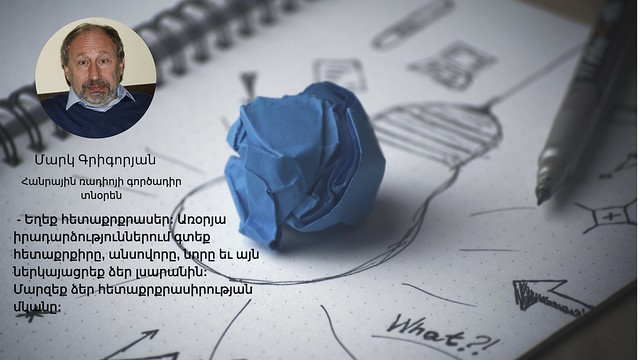 “Be interesting. In everyday events, find the interesting, the unusual, the new, and present it to your audience. Exercise your curiosity muscle,” advises Public Radio’s Executive Director Mark Grigoryan. Training the curiosity muscle, according to Grigoryan, is done in two ways. One is through daily work; the second, by reading. And, in Grigoryan’s words, reading you must do always — and not just your and your colleagues’ works, but also works of fiction. 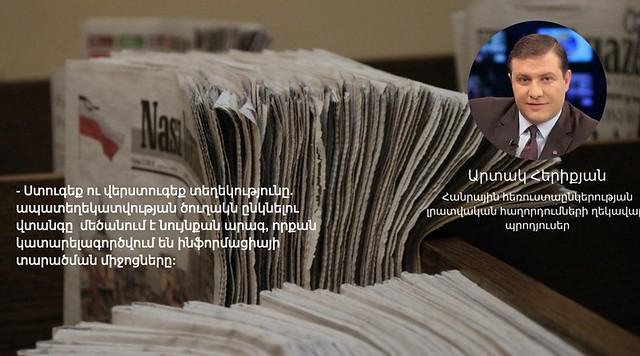 Producer and head of news programs at Public Television Artak Herikyan draws attention to several problems that emerged in the media under new technologies. We’re talking first of all about checking and re-checking information, and not losing the humanistic values.

“Don’t swear, don’t insult a person to fill an audience: journalism’s credo is humanism. Check and re-check information: the danger of falling into the trap of misinformation increases as quickly as the means of spreading information becomes perfected. Protect the journalistic language from the sometimes imperceptible incursion of government officials’ lexicon: the audience may not understand also our words. Show, don’t spout,” says Herikyan. 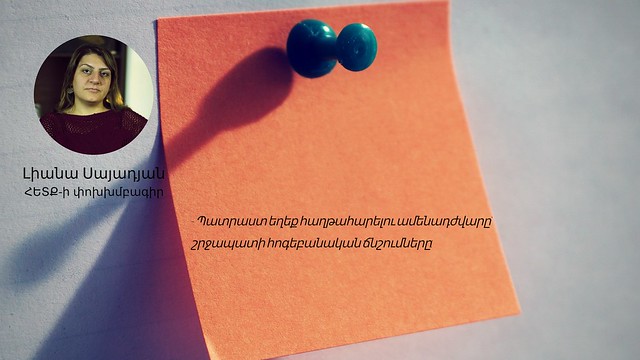 Investigative journalists clash with the pressures of the environment probably the most and probably have the largest army of enemies. Hetq’s journalists have overcome this issue long ago. Hetq deputy editor Liana Sayadyan reminds journalists:

“As a journalist, be ready to acquire more enemies than friends. The hardest thing is overcoming the psychological pressures of your surroundings.”