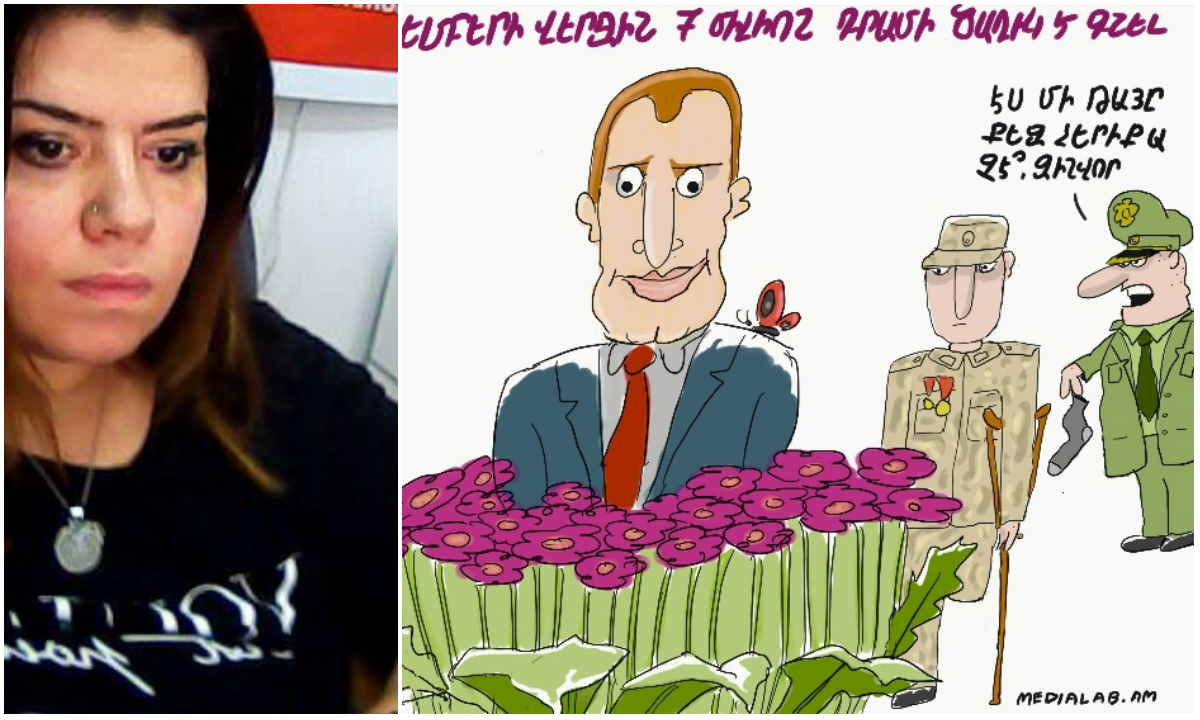 On January 28, Army Day in Armenia, the chief editor of MediaLab.am began to receive written threats after a caricature was published on the news website.

Marianna Grigoryan received threats first in comments below the caricature (the topic of which was the defense minister’s public procurement of flowers valued at 7 million AMD [about US$14,500]) posted on Facebook, then in personal messages.

“Don’t you think that you’ve gone too far? Look that you don’t fall victim to that French thing… You don’t know who you’re up against, your time is passing, an hourglass was sent… I’m the one who sends the opponent to that other world” — Grigoryan received comments and letters with such remarks.

The threats also mentioned her child, which worried the editor so much that for several days she hasn’t been sending the child to school.

Grigoryan appealed to the Helsinki Citizens’ Assembly Vanadzor Office (HCA Vanadzor) with this matter. An attorney was provided, materials prepared and sent to the police.

“The police at this stage cannot take care of Marianna’s safety; first, she has to be recognized as the victim, then the investigative committee can implement measures to ensure her safety. The law stipulates a 10-day deadline to dismiss, reject, or prosecute a case,” says HCA Vanadzor Chair Artur Sakunts.

The human rights defender is not convinced that the police and the investigative unit will act promptly, but considering that the person making the threats is a real user, he believes it should be easy for law enforcement to find him.

The person threatening the news website editor is a real user, who after the commotion removed photos of him in a military uniform from his page. But, according to Sakunts, they managed to copy the photos and attach it to the case materials.

“We’ve taken all possible measures connected to Marianna’s case, a statement was circulated, the materials were sent to the police, the case was made public. It remains to wait for the case to be given legal status, so that steps to prevent the threats be taken, a petition be submitted,” says Sakunts.

The US Embassy in Armenia  tweeted about this incident on its official Twitter account, stating: “Attacks on the media, such as those advocating harm to the director of @MediaLab recently, are an anathema to a free press that is vital to democracy.”

“Attacks on the media, such as those advocating harm to the director of @MediaLab recently, are an anathema to a free press that is vital to democracy.”

Media organizations have also issued a statement regarding the threats against the Medialab editorial team.

The organizations ask law enforcement bodies to take steps to identify the author of the threats and to hold him accountable.

This is not the first time an attempt was made to scare a journalist with threats. A similar incident occurred, for example, with Hetq journalist Ani Hovhannisyan, who had received threats over the phone that if she continues to “stick her nose” where it doesn’t belong, things will get bad for not only her, but also members of her family.

The current situation proves that when media platforms or journalists who express different views appear on the scene, they are deemed “opponents” and are subject to pressure.

In a militarized and aggressive environment, the right to free expression is the first to go.