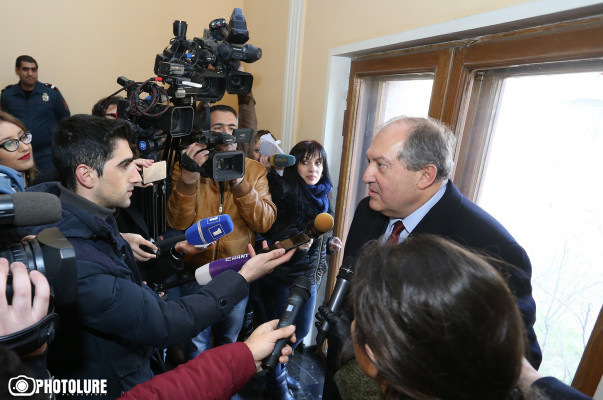 In the two weeks after getting Serzh Sargsyan’s offer to have his name put forth for the position of president, Armen Sargsyan has managed to interact in different formats with journalists.

On January 29 and 30, he spoke with two different groups of journalists, then gave an exclusive interview to Shant TV.

One thing that “passes like red thread” in the relationships between Armen Sargsyan and journalists is the torrent of questions that has already become par for the course, and the not-that-usual-for-our-political-arena patient behavior Armen Sargsyan exhibits.

Clearly, Armen Sargsyan doesn’t wish to answer many questions in his meetings with journalists; instead, he is calling for a new journalistic and political culture to be shaped.

After meeting with members of the Armenian Revolutionary Federation (ARF), Armen Sargsyan tells journalists who’ve begun a briefing that he prefers to answer questions after the meetings with political parties and NGOs have been concluded, when a decision will already have been made.

Listening to questions that complement each other, he continues to walk toward the ARF office’s exit, but he can’t remain indifferent, and asked about his relationship with Vazgen Sargsyan, he calls the stories published by the press utter lies.

Armen Sargyan advises journalists not to artificially inflate “that speculation.”

At this first meeting, he appeals to journalists: “I, respecting you, again ask you to respect my issues at this time. I’m not going to go anywhere if I become president or if I confirm my candidacy or not. I will be ready to answer all your questions.”

The subsequent statement directed to journalists is the following: “Allow me, I asked you, let’s also develop some journalistic and political ethics — let’s respect each other. When I was prime minister, you’ll probably recall I treated journalists with great respect. And if you recall, the journalism ministry was shut down. I treat the journalism community with great respect, and if I decide, am nominated, and elected, I will continue to work with you in the same manner.”

This seems to have an effect on journalists. They thank Armen Sargsyan. Moments later, Sargsyan opens the car door, asks to be allowed to say goodbye to his hosts, the ARF politicians.

“May I? Of course, I appreciate your journalistic vigor,” he says, smiling.

The journalists respond with a smile and amiably make way for the Armenian ambassador to the UK.

The next Sargsyan-journalists meeting is moments before the meeting with representatives of the National Academy of Sciences. Armen Sargsyan apologizes to journalists for not answering their questions. The journalists continue to ask him questions, going up the stairs behind him.

At the top of the stairs, A1+ formulates a question. Sargsyan stops, noticing that both he and the journalists are out of breath. In a whisper he says, “You can relax… please allow me to continue my meetings, and when I finish the meetings, make my decision, you’ll be one of the first who’ll know about it.”

Two thoughts that he expressed at the time as answers to questions are the following: “I have nothing to do with Amulsar” and “I’ve returned to Armenia forever; moreover, I didn’t leave Armenia either.”

Armen Sargsyan’s attitude toward the media is once again demonstrated on Shant TV, during the approximately 45-minute interview. Journalist Aram Abrahamyan asks his guest, “Are you ready for the fact that if you get the president’s position, very grievous, very negative, very biting news stories will be written about you? Will you be offended, will you respond [to them] or not?”

Sargsyan initially jokes, “Why do you think very grievous and very biting stories will be written about me?” and then answers the question: “I believe and I hope that [the media] will write about me that which is the truth. If I make any wrong moves or adopt a wrong decision or violate the Constitution, I’m ready to listen to criticism. But if I or any state official does something good, that good thing should also be praised. Because the path to progress is not only to reproach, but also to recognize the positive. Since we live in the 21st century, the role of the media has increased greatly. We all know that it is the fourth power [fourth estate], and if this is power, then in society this power has to be in the right place. And the demands for it have to be the same as for the other parts of public life.”

Armen Sargsyan also spoke about the Daily Mail, explaining why his wife in an interview to the paper said that her sons feel British.

Armen Sarsgyan told Aram Abrahamyan that the Daily Mail is partly “yellow press,” and during the interview the journalist “pushed [his wife] in the direction he needed.”

Journalists’ need “to push” becomes more interesting when an agile and patient person gives an interview. The public only benefits from it.