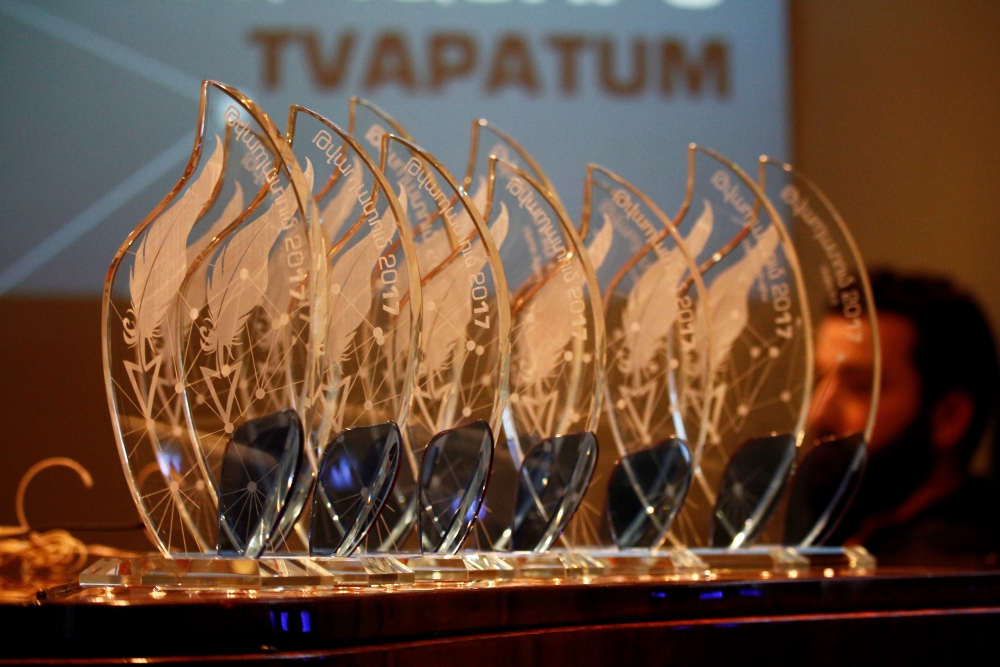 The best journalism stories in 2017 about the changes taking place in Armenia and their impact have become known.

“I had already overcome the difficulties, changed, and become a completely new person. I wanted to talk about this change, inspire women who are in search of freedom. If you find the strength within yourself, everything is possible,” says Hasmik Khachatryan excitedly, the subject of the Daphne.am story “Business lady free from violence,” who was awarded the Homo Agendi at Tvapatum 2017: Stories About Change journalism contest.

Observer: Winner of the investigative journalism category was Hetq.am journalist Hrant Galstyan for his story “Artsakh Frontline 2016: Fallen Soldiers.” Through data journalism and human stories, the piece features the families of the soldiers who died in the Four-Day War in April 2016. The piece explores the hypothesis that the overwhelming majority of these families live in poverty.

“I think this was an opportunity once again to read the piece, to think about the issue. The purpose is to create a link between society and the media outlet, to talk about closed subjects,” says Hrant.

The jury unanimously approved Ampop.am’s work in the category of the best use of Media 3.0 technology.

“Our journalism is not that accessible to the wider public; we more so want to help our colleagues so that they shape a news agenda. Ahead of the elections, with our studies of the issues of the capital’s communities, we wanted to spark media outlets and civil society organizations,” describes team leader Suren Deheryan.

Re-information: In the category of best reform coverage, the jury didn’t award a main prize, instead awarding a special prize to Susan Badalyan for the story “The state’s positive obligations: The care of single elderly people” broadcast on the Public TV of Armenia, and to Anush Muradyan for the video “Number of people with disability status being cut, citizens complain” published on Azatutyun.am.

The key topics of the contest held for the third consecutive year are the areas of social, accountable, and transparent governance, the enlargement of communities, and human rights. This year, 135 journalism works from 36 news outlets were considered.

“The number of participants had increased this year, but I wouldn’t say there were differences in quality. Very interesting pieces were submitted, but in each category one piece was recognized as the winner. The matter, it seems, was resolved through special prizes and incentive awards,” says contest jury member, media expert Mesrop Harutyunyan.

Studying journalism stories from different genres, the jury placed importance on the quality of the work, compliance with the contest’s topics, and the use of creative and innovative approaches.

The jury bestowed incentive awards on stories that interested or excited them, or they admired.

For the best story with numbers, a special prize was given to Zhanna Poghosyan, author of the video Tlik: Daily Struggle for Water, published on CivilNet.am.

Angela Frangyan, author of the film Road broadcast on Yerkir Media TV and produced by Bars Media documentary film studio, received a special prize for its professional high quality and her unique work with the film’s subjects.

Authors of the Profession: Journalist program’s “In the Name of Equality” episode Sona Abrahamyan and Aelita Chilingaryan received a special award, for complete and multi-faceted coverage of an important social topic.

For depicting the inspiring characters of the young teachers going to the regions as part of the Teach For Armenia program in a series of engaging stories on Mediamax.am, journalist Lusine Gharibyan was given an incentive prize.

The Media Initiatives Center [also responsible for this site], in turn, handed certificates to authors of three pieces: Tehmine Yenoqyan for the film Bubble Justice, Zaruhi Mejlumyan and Grisha Balasanyan for the article series “Prison Food,” Ruzanna Gishyan and Arus Hakobyan for the film The Village Closest to the Sun: Basen.

I Vote: This year contest participants will decide the winner of the audience trust award. They are going to vote for one piece among the 20 submisions awarded the highest points by the jury.

Tvapatum is organized with the support of the American people through the United States Agency for International Development (USAID) within the framework of the Media for Informed Civic Engagement project and is implemented jointly by the Media Initiatives Center and Internews.