Yerevan Elections: Attacks on Journalists and Their Work 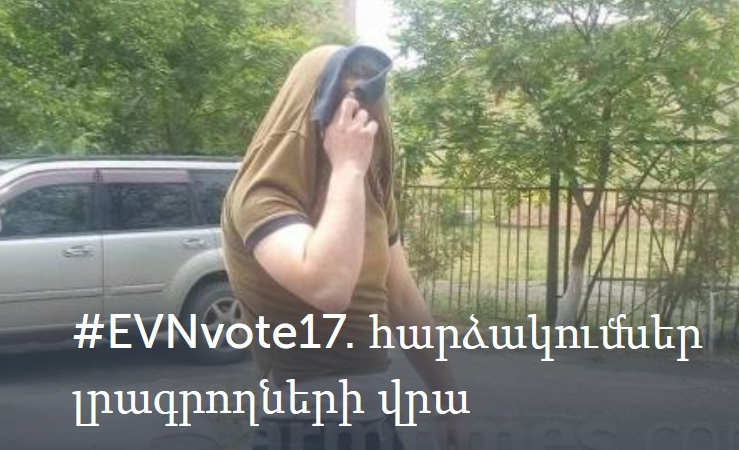 On May 14, the day of Yerevan’s municipal elections, there were reported incidents of journalists being attacked. Compared to the April 2 parliamentary elections, these local elections were, in fact, a serious challenge for journalists. On voting day, at polling stations and party headquarters journalists not only were prevented from filming, but also were insulted and threatened, with “uneducated,” “if you had been a boy, I’d have smashed your face, then you’d know,” “Who do you think you are?” and other such phrases being hurled at them.

At the Republican Party of Armenia (HHK) headquarters on Yerevan’s Nar-Dos St., Sisak Gabrielyan was assaulted. Sisak was attacked at that same headquarters during the parliamentary elections. The journalist, taking into account the previous incident, was monitoring the headquarters’ activities. He saw that one of the citizens leaving the headquarters was taking money out of their purse and distributing it to other citizens brought to the building. Noticing that new people were entering the building, the journalist entered, after which some of the men began to insult and push him, and try to seize his phone. And so they interrupted his filming, preventing the journalist’s work.

Whereas Tatev Khachatryan was attacked by a young man at School No. 64 in Erebuni administrative district (polling station 10/29) who tried to seize her phone.

Tatev’s work was also obstructed at polling station 7/46 in the Yerevan district of Malatia-Sebastia.

At polling station 10/28 in Erebuni, 1in.am reporter Mariam Grigoryan’s professional activities were obstructed when people told her she had no right to film at the polling station and threatened to sue her.

A statement issued by media organizations mentions that two cases of violence and four cases of obstruction of journalists’ activities were recorded.

“Previous years’ experience doesn’t particularly inspire confidence that those who violated the rights of journalists and the media will be held accountable,” reads the statement, in part.

The Office of the Human Rights Defender will send all data containing alleged elements of crime regarding obstructing journalists’ activities to investigative bodies.