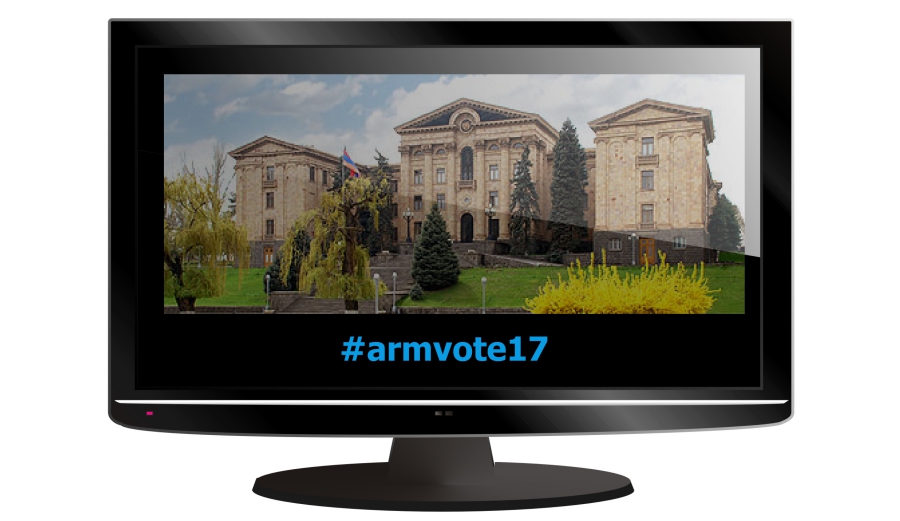 Every 10 days during the election period, the National Commission of Television and Radio (NCTR) published the results of its monitoring of terrestrial television and radio stations. The Commission found no violations during the first 20 days of the 2017 National Assembly election.

The Commission monitors terrestrial TV and radio stations according to the methodology it developed.

According to the monitoring results, making use of unpaid airtime the most was the ruling party, the Republican Party of Armenia (HHK) — with 224 minutes of airtime.

In second and third place were ELQ and Free Democrats — with 216 and 207 minutes of airtime, respectively. Making the least use of unpaid airtime was the Armenian Revolutionary Federation (ARF-D), with 69 minutes. In fact, ARF-D was the only political group that didn’t avail of unpaid airtime on Armenia’s and Shirak’s public radio stations.

If HHK was the leader of consuming unpaid airtime, then Tsarukyan alliance was in first place in terms of number of references in news broadcasts and other programs: its election campaign was discussed for a total of 8,856 minutes. Second and third place went to ELQ and HHK. Mentioned the least on air was the Armenian Communist Party (5,661 minutes).

Not all of the 28 TV stations offering paid airtime were actively covering the campaign.

The Armenia branch of MIR intergovernmental TV and radio company, Idjevan TV, and ALT TV made the fewest mentions of political groups’ election campaigns. While Kotayk TV and Noy Hayastan didn’t talk about the campaign at all.

According to head of NCTR’s Legal and Licensing Department Davit Margaryan, the Commission has received no complaints related to airtime violations.

The political party or bloc using paid airtime the most was also HHK, who during the first 20 days of the campaign used 3,232 minutes of paid airtime.

In second place was Tsarukyan alliance (2,152 minutes), followed by ORO (1,865 minutes) in third place. Also having more than 1,000 minutes of paid airtime was Armenian Renaissance. The remaining parties were on paid air for less than 800 minutes. The Armenian Communist Party paid only for 65 minutes of airtime.

From the monitoring results, we can imagine about not only the capacities, but also the preferences of the political parties and blocs.

It’s interesting that ELQ didn’t make use of public television’s paid airtime at all, while the Free Democrats purchased only 1.45 minutes of airtime.

For the regional TV stations, the election campaign is an opportunity to make money.

ELQ was the most on the paid airtime of Lori and Fortuna TV channels; the Free Democrats the most on Lori TV; Armenian Renaissance, on H3 and Aragats; Tsarukyan alliance, on Kentron and Gyumri’s Shant TV; and Armenian National Congress–People’s Party of Armenia alliance, also on Shant TV.

The Armenian Communist Party spent the least amount of money and spent half of its paid airtime to purchase airtime on Kotayk TV.

A few TV stations were unable to sell their airtime at all: Noy Hayastan not only didn’t receive offers of paid airtime, but also didn’t cover the campaign at all; MIR covered it very passively; while Hrazdan TV, despite the lack of paid airtime offers, actively covered the campaigns of all political parties and blocs.