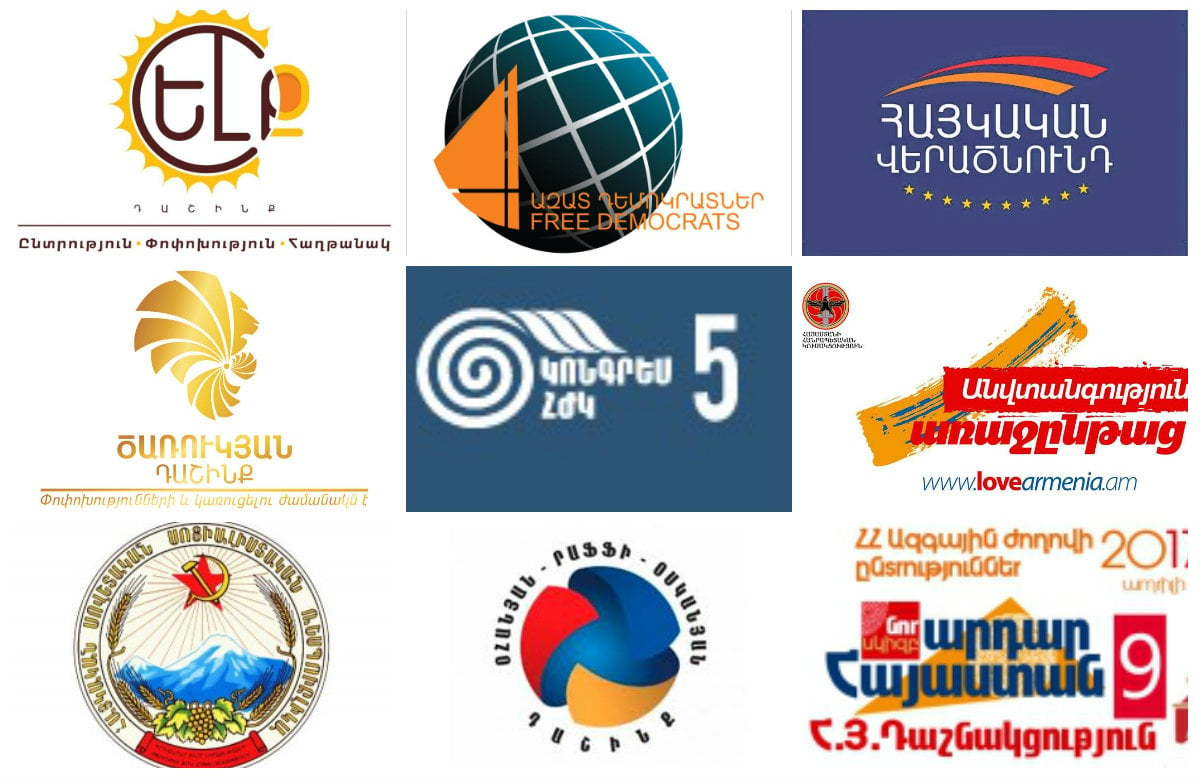 Election campaign advertising is everywhere: on television, on social media, at bus stops, on building walls, even on drain pipes. In an already politicized country, you won’t find a platform today where campaigning is not being carried out. The political groups running in the election present their programs and messages through all possible means of media. Apart from the unpaid advertising provided by law, they also actively make use of opportunities for paid advertising.

To fund the direct costs of campaigning (leasing space, printing, producing posters, securing airtime, and so on), political parties and blocs have funds, where donations are being made during this period.

So that the process is transparent, the banks submit to the Central Electoral Commission (CEC) a breakdown of the funds’ deposits and withdrawals, which are subsequently summarized and published on the CEC website (within three days).

According to Armenia’s Electoral Code, all the expenses of services rendered for the election campaign must be covered only by the funds created for this purpose.

The law doesn’t regulate online advertising. The money invested in social media is not reflected in the list of services rendered for the election campaign.

Taking this into account, political groups and individual candidates are also actively using the opportunities afforded by the internet in this election campaign.

The Armenian National Congress–People’s Party of Armenia alliance prepared to actively disseminate its promotional materials first of all by launching a new website.

“You can find our party’s program, candidates, and other informational materials on Google, Facebook, Instagram, Mail.ru, YouTube — it can be said that all the resources are used,” says candidate Areg Gevorgyan, no. 22 on the party’s list.

According to Gagik Tsarukyan’s spokesperson, Iveta Tonoyan, during this election, the political groups must also have an online presence, whether they like it or not. The Prosperous Armenia Party website is currently under maintenance — instead, the Tsarukyan alliance’s newly created website, Tsarukyan.am, is operational.

“The information designed for the online audience is more dynamic and concise. For instance, to present the 15 points of our program, we’ve chosen photo posters, which are more accessible and understandable for visual perception. On various online platforms, we disseminate the texts and videos of public speeches, choosing mainly the most felicitous passages,” says Tonoyan.

The Free Democrats uses outdoor advertising, booklets, and posters. It also makes use of public TV and radio’s unpaid airtime.

“We also consider Facebook important: though the party’s page has always been active, it’s now working three times as much. Through social media we’re able to reach different segments of society, since the people watching public television are not the active Facebook users,” says the party’s vice-president, Angela Khachatryan.

“For our party, television is the media with the largest and most influential audience, which we now also use to connect with voters. The second platform we emphasize is advertising posters, then radio. We also have a Facebook page, but, as far as I know, we don’t have any other ads online,” says the party’s person responsible for campaign matters, Armen Manukyan.

The parties comprising the ELQ alliance haven’t created a campaign website. They were satisfied with a Facebook page. Moreover, there’s no information about ELQ on the Civil Contract website. The Bright Armenia website actively informs visitors of the election campaign process, whereas the Republic party doesn’t have a website.

According to ELQ’s legal affairs coordinator, the candidate nominated in the no. 2 precinct, Vahagn Hovakimyan, the bloc’s advertising budget corresponds to the donations collected through its fund.

“In addition, individual candidates through their own means are disseminating campaign materials in not only print, but also on television and especially online,” says Hovakimyan.

The Armenian Renaissance party’s spokesperson, Edgar Arakelyan, says they haven’t decided in advance which media platforms they’ll mostly be using. In his words, the party is not currently using paid airtime, since it’s expensive; it prefers print materials and posters.

“I can’t speak about individual candidates, but the party during this election also attaches importance to Facebook. Apart from YouTube, we’re not represented on other online platforms, though we use our personal pages to disseminate different campaign materials,” says the spokesperson.

According to Bagrat Yesayan, nominated in the no. 4 precinct on the Armenian Revolutionary Federation list, his party disseminates campaign materials through television, radio, online news media, and print materials.

In Bagrat Yesayan’s opinion, to achieve success online, it’s important that the information be brief, with a few lines or an image, since it has to quickly attract the viewer’s attention: “Because we’re politicized, in Armenia mainly Facebook is active, and Twitter to some extent. We don’t engage in election campaigning on VKontakte or Odnoklassniki.”

The Ohanyan-Raffi-Oskanian alliance hasn’t created a separate website. The alliance uses the Heritage Party’s website to distribute campaign materials during this period. The alliance’s spokesperson at this time, Aregnaz Manukyan, finds it difficult to assess which platform is more effective, but he thinks that for the next campaign, they must work in all directions.

“The alliance, in turn, and the individual candidates, in their turn, actively disseminate online speeches, election program provisions, and other materials. The main online resource for us is Facebook,” Manukyan adds.

Also placing importance on using all online platforms is the Republican Party of Armenia (HHK). The person responsible for campaign matters, HHK vice-president Armen Ashotyan says that in this election they took a lesson from Europe: they’re actively represented not only in traditional media, but also through a number of new innovations — all of the internet’s resources.

“Our party is the strongest on the internet today. Also leading is our brand website, LoveArmenia.am, which has been operational since March 5 and has already managed to get 100 thousand visits. The number of views on our videos is passing the 1 million mark,” says Ashotyan.

According to Ashotyan, also doing well are the hashtag #LoveArmenia and the bonbons with the HHK slogan. “The election results will show the effectiveness of our innovations in the election campaign,” he adds.