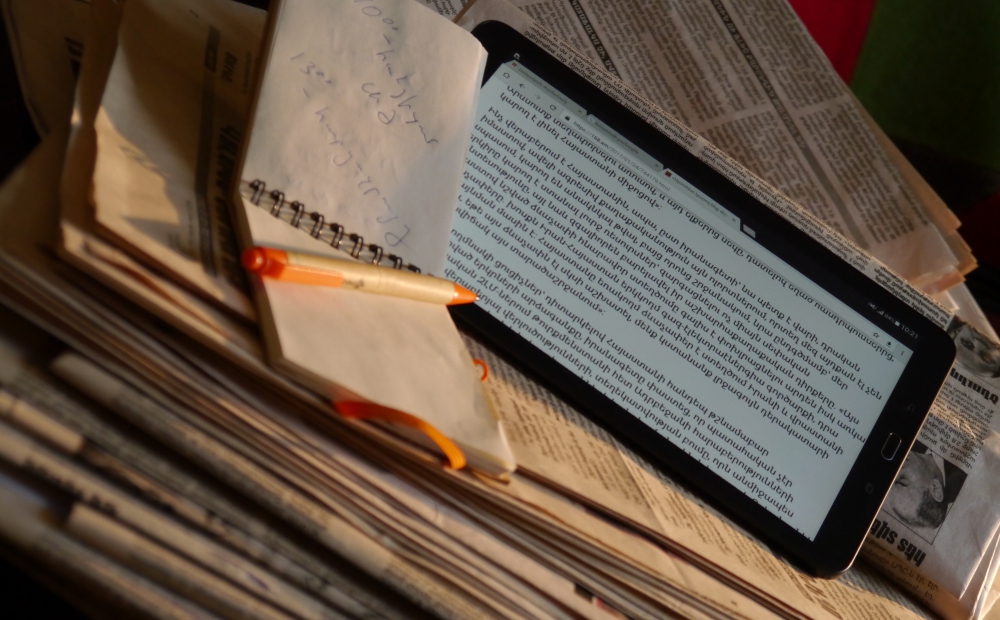 In Armenia, the transition from print to digital was painful. In addition to topics and texts, journalists started to think about video and photo materials, as well as how to edit, process, and circulate content on social media networks.

The editors-in-chief were forced to find ways to increase website traffic just the way they used to worry about an increase in newspaper sales. It was a new challenge for the media outlets, which needed to persevere and succeed.

Today, looking back at the first online versions of newspapers, one can see several development paths.

We monitored several websites including armtimes.com, aravot.am, and 168.am. These websites were created at various times, and the time-factor affected those websites making them unique in their own ways.

The editors-in-chiefs of all the websites mentioned above believe that journalists are still learning and adapting to the new tools. All three wish to have a separate department that will focus on video production, but they don’t have such a department because of financial issues.

Journalists, who used to only write texts, are forced to undergo a training. There are more requirements for new journalists. For example, armtimes.com has a camera operator who works alone, they ask questions, make a video, edit and post it on the website.

Following work culture from the days of print, at these online media outlets department heads discuss topics with journalists and adapt them to website format. The opposite process takes place as well; an online topic can provide an extensive material for a newspaper.

As such, there is no separation of journalists who write solely for a newspaper or a website. However, it is possible for one journalist to write more for a newspaper and less for a website, and vice versa. Along with Internet traffic growth, such a division of labor became a requirement. With an increase in the number of online viewers, more and more content was created for the website. Journalists slowly got used to the demands, and surely a division in the way materials are created and distributed took place.

Out of three media outlets, “Haykakan Zhamanak” started its online activity the last. Armtimes.com is only about a year and a half old. Director of Armtimes.com Hayk Gevorgyan says that the website generates finances through advertising only; they don’t have any commercial products. “We can say that the website survives with money from newspaper sales. At the moment, it doesn’t bring any profit but we see a progressive dynamic. Today, our daily reach 25-40,000 views, whereas only a year ago we had 10,000 views.”

Some of the newspaper content is posted on the website; the focus is mainly on the political life and the economic development. The website has a video section, where on the average around 2 to 3 videos of own production are posted. The section also has live broadcasts. The current version of the website was designed a few months ago. With time website content becomes popular and readers start to discuss it online. Breaking news and interesting stories bring them more visits. They keep our website neat and user-friendly, with little advertising and quality photos.

“Aravot” newspaper had an electronic version as early as in 1998. From 2011, aravot.am started its online media activity. Content-wise, the website is similar to the newspaper. The main difference is a large number of videos on the website.

Speaking of videos, the editor-in-chief of “Aravot” website Anna Israelian says that during the text development and editing process videos help them cut out any subjectivity that comes from journalists’ interactions. In addition, videos generate certain income for the website.

Aravot’s archive is presented separately. They put an emphasis on the material quantity, ranging from official statements to videos. Compared to armtimes.com and 168.am, aravot.am has more ads. According to Google Analytics, as of January 24, the number of visitors to aravot.am is 74,387.

According to Anna Israelyan, at the moment, aravot.am is not profitable because advertisers still prefer to have an ad in a newspaper with small circulation than a website with high traffic. “We need a change in mentality here. In terms of income source, 70-80% of it comes from the newspaper, and 20-30% is generated by the website,” says Israelyan.

As early as in 2005, “168 Zham” newspaper had an electronic version, that hosted newspaper materials. Starting from 2011, 168.am began its online media activity by offering its readers analytical publications and new articles. There is a lot of content on the foreign policy and the economy on the website. To readers interested in the economy,  a separate platform 168finance was created. There is also blog.168.am, which posts entertainment news. This way the company targets different audiences.

At the moment, there are no banner ads on the website. It has separate sections for text and videos. According to Google Analytics, as of January 24, the number of visitors to 168.am is 42,731.

“Without the online version, it would be impossible to meet the new challenges. Initially, the popularity of the newspaper helped establish our website. Now we have the opposite situation when the website helps the newspaper from a financial point of view,” says Satik Seyranyan.

According to her, the website content is 80% different from the newspaper content. They have commercial agreements which provide stable income. “Other than banner ads, there are many commercial publications, mainly press releases,” says Seyranyan.