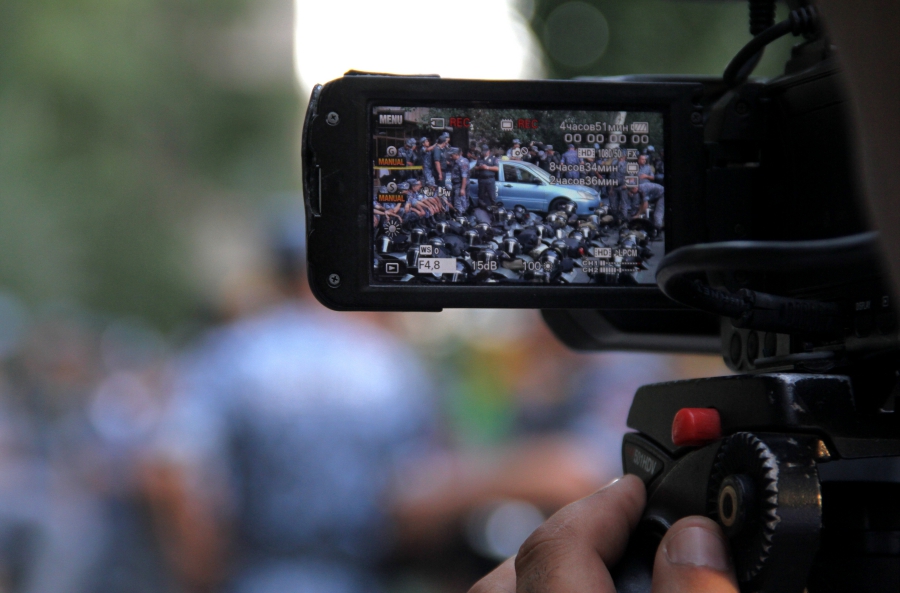 2016 was a busy year for reporters, we had quite several newsbreaks and challenging developments. Media.am spoke with some of our colleagues about the professional trends and the events that marked the past year.

Sara believes the four-day war in April was by far the most remarkable event in the media field in 2016. Since the ceasefire in 1994, it was the largest conflict between Armenia and Azerbaijan.”The media and journalists were not prepared to work in such conditions because the situation was new. Remaining impartial and vigilant was a challenge. The reporters did not know what to write so that they don’t do more harm. There was a lot of pressure in terms of addressing abuse and corruption in the army.”

She also singled out 2016 Yerevan hostage crisis, since it presented difficulty in regard to impartiality. “Journalists did have experience covering demonstrations before, but in this case, the presence of the armed group, as well as the actions of the law enforcement agencies added a new challenge. In addition, there were documented attacks on journalists who were covering the events. When it came to dispersing the crowd, nobody was spared, and journalists too were violently attacked.”

Sara spoke about the important role of media community during 2016 local elections within election observation missions. With the appointment of the new prime minister, we saw a qualitative change in the way different opinions and assessments were circulated in the media. The audience got an opportunity to receive independent and fact-based information.

For 2017, Sara’s suggestion is to focus on data journalism. Other than that, media stories should include diverse opinions. Often different opinions are published separately and they simply disappear in the news feed. The use of video should be justified as well. The most important part of any video must be made available for sharing on social networks.

According to Nikolay, there were several events in 2016 that put Armenia into an international media spotlight, including the April war, the armed attack on the Armenian police station and the aftermaths, as well as Pope Francis’ visit to Armenia.

“Due to growing attention to Armenia, local media outlets, and journalists gained an opportunity to provide and even sell their product to the foreign audience,” he said. The Internet continues to beat TV when it comes to efficiency. For many reasons, TV cannot catch up with the Internet. Here is an example. During the Yerevan hostage crisis, when the entire Internet was flooded with news on the armed group, and online media was organizing live streams from the ground, many, if not all, TV stations, were broadcasting entertainment programs.

“Interestingly, we saw the complete opposite in neighboring Turkey. A day before the attack on the police station, during the attempted coup d’état, many TV companies succeeded in providing live broadcasts from the ground, they promptly aired comments from politicians and active participants in the coup d’etat.” Talking about trends, Nikolay noted that in 2016 journalists were more willing to use new tools. “We witnessed more live broadcasts from the ground through Periscope and Facebook, some media outlets have even started using drones.” Journalists try to strengthen the relationship with their readers, by offering surveys, tests, infographics and other interactive tools.

For Sedrak, the main event of the year was the April war, during well-organized and purposeful work has been carried out. “Once again, we proved that at critical times we can organize and work quite effectively. Today many episodes from the four-day war are interpreted very differently. I think one of the reasons is that Azerbaijani propaganda was aimed primarily at local population. Azerbaijan wanted to persuade us that they came out of the war as a winner, with all the following consequences.”

According to him, it was interesting to see the launch of ampop.am project in the field of investigative journalism. “This is the first Armenian project of a kind, as far as I remember. I hope it succeeds.”

Sedrak believes that the biggest trend in the field of journalism is working with data; the Big Data phenomenon, data collection, analysis and visualization. In this regard, we have a lot of work to do. First, we need to involve professionals, who know how to work with data in the media field. That is a relatively simple task if you have the finances. We also need to come up with a business model that will make this kind of work effective and profitable.” If we cannot secure profits, Big Data professionals will quickly abandon the media field and will go back to the IT sector. Without profits, the best projects are doomed to fail, and the biggest trends never come to be.