Lessons of Sari Tagh: What Can Journalists Do To Be Protected 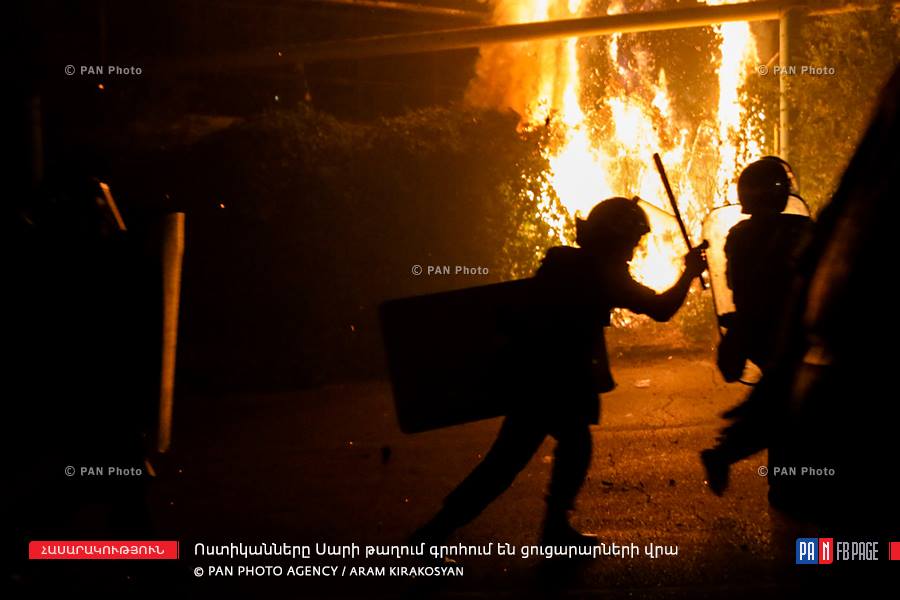 In the recent years in Armenia, the journalists covering protest actions, demonstrations, were subject to violence, and risked their lives, which is causing editors to call for the necessity of insurance for journalists.

On July 29 during the march at Sari Tagh, following the blast of stun grenades, “A1+” journalist Robert Ananyan suffered shrapnel injuries to his feet and hands and noted that in Armenia no newsroom has the type of system where the journalists are insured, but that the journalist’s professional life in turn shows that there is a need to implement such a system. According to him, the matter not only concerns insurance, but also specific uniforms, since in many cases, when going to cover any demonstration or protest, journalists cannot assume that it will escalate to the use of explosives by police.

Robert Ananyan states: “In Armenia journalists are exposed to violence, find themselves in the hospital, and the state bears the costs, because it exposes the violence, just like how it happened in my case. But it is possible to refrain from carrying out that function, and all of those expenses will be left with the journalist. There was no basis for thinking that during Sari Tagh my eye wouldn’t come out, or that I would not sustain another serious injury. The consequences were not evident, and how was I, a journalist who receives an average salary, to close these costs? Or who was going to transfer money? For my editorials, I have always found the support of “A1+” to be both financial and moral. The editorial staff has never left me alone, has never said: we have not insured you, go realize your mind’s way. But I am considering this issue from the field of permanent insurance.”

Edik Baghdasaryan, the editor-in-chief of “Hetq” notes that the insurance of journalists in Armenia’s media field is not realized because news outlets do not have that many financial resources, the issue is not even discussed in newsrooms. According to him, very few of the world’s news outlets have that insurance, seemingly only the world’s largest ones.

The editor of “Hetq” stated: “Many volunteer journalists are going to work in war zones by their own means without insurance, and many of the major news outlets are beginning to buy these articles from them, without keeping their own journalist. Our journalists know that they are not insured, but they go and work in heated areas. We do not even have protective jackets. Even in the future I do not think we will have insurance, as long as the country is still in this condition, I do not see how it would be possible to do that.”

“Azatutyun” radio station’s Yerevan office bureau recently acquired protective vests for their journalists. The radio station’s bureau director, editor-in-chief Siranush Gevorgyan notes that two years have already passed since journalists were attacked during the dispersal of protests, despite everyone knowing that they were journalists, they are constantly at the scene and are working on techniques.

The “Azatutyun” radio station’s Yerevan bureau director stated: “We decided to at least provide them with protective vests. On those vests in big letters “Press” is written. We have a good amount in order for the journalists and camera people working at the scene to wear them. The police dispersing protests use the type of means which cause shrapnel injuries. And now if they wear those protective vests, I am not sure how much it will help, but at least they will see that they are journalists and they are working on the scene. Of course, we cannot say that we are 100% protecting the safety of our journalists,” and she added that they do not insure their journalists.

During the events of Sari Tagh, around 8 people in civilian clothing were beating “Lragir.am” correspondent Marut Vanyan with rods as thick as wood, and as a result the journalist sustained an injury to this right leg, and his entire body was covered in bruises. Vanyan was able to protect his face and chest with only his hands and backpack, and as a result all of the blows were directed to his arms and legs.

Vanyan stated: “Wear a protective jacket and helmet all you like, if the army has attacked you and is beating you, that will not save you. After that event, the editorial staff and my friends supported me. No one reimbursed, I myself dealt with my hospital expenses. Armenia’s editorial offices do not have that opportunity, otherwise which news outlet does not wish to insure their employees? The media does not receive large revenues from advertising, the market is small, they are barely able to make ends meet in order to pay salaries.”

Melik Baghdasaryan, the director of “Photolur” thinks that not only are journalists not insured, but also those expensive equipments, which camera people and photographers work with.

The perennial photographer worryingly describes the situation: “The journalist can keep her pen and they won’t know that she is a journalist, but what can the photographer do with his camera? How? He must be the focus of that situation, if he goes far away, what photographer? How will he provide coverage? He must bring photos to the editorial board. During the Baghramyan and Sari Tagh situations we just had luck that our boys did not get hurt, but when there were fireworks on Khorenatsi, our employees suffered burns.”

He is against the wearing of protective jackets when working since he believes that it will just interfere with the photographers.

“If it is a bulletproof vest, it will amount to about 10 kg of weight, and the equipment is already quite a burden as well, so how will that person work? It is possible to simply have jackets, which have “Press” written on them, but I think that will also not guarantee our safety,” states the director of “Photolur.”

The co-founder of “4 Plus” Documentary Photography Centre in Armenia, photographer Anush Babajanyan, as a result of covering the four-day war in April from the frontline, was convinced for the first time that she has a need for protection.

“Although I am used to the idea that as a freelance photojournalist I do not have an editorial staff waiting by my side. My actions are under my responsibility, but if there was any kind of organization, which we could apply to in order to get at least a helmet or bulletproof vest, it would already be of big help. I was thinking of that when leaving for the frontlines, but I had very little time and after all, this type of opportunity does not exist in Armenia. It is at least possible to get a helmet, but to get a bulletproof vest is very difficult,” said the photojournalist.

Robert Ananyan also covered the four-day war and thinks that those reporting journalists are heading to the frontlines unprepared. Mkrtchyan

“The defense army is giving uniforms to the journalists for working in the frontlines, and you become a soldier and the next target for the enemy, because you begin to not differ from the troops at all,” states the journalist.