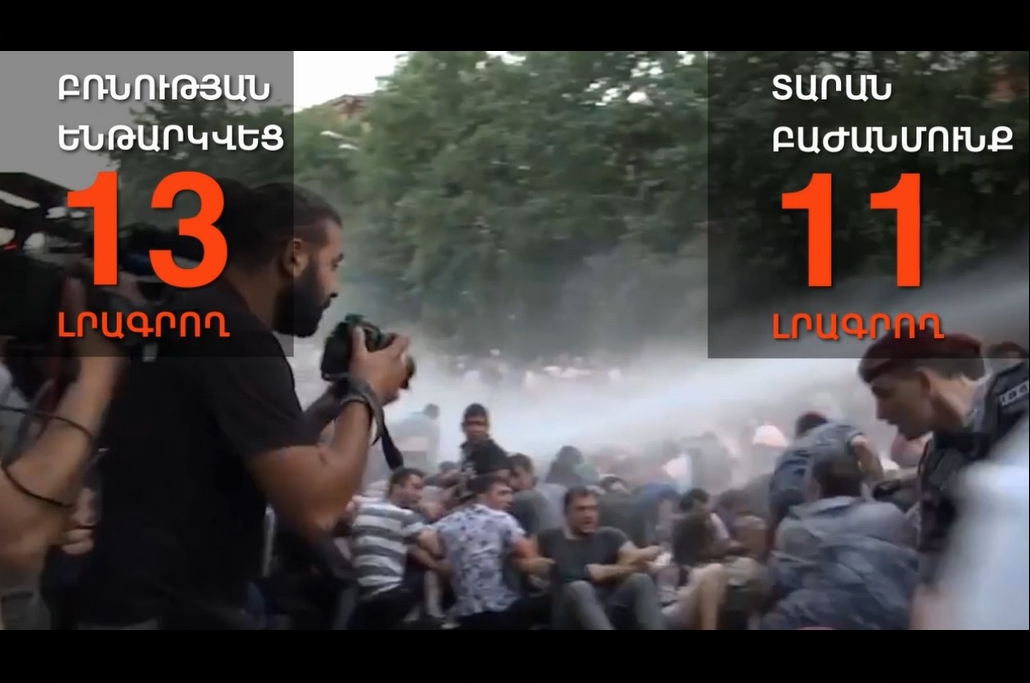 On June 23, 2015, the Electric Yerevan civic movement in Yerevan started, which expanded after the dispersal of the peaceful protest against the hike in electricity rates. Special measures and use of force were used against the demonstrators gathered on Baghramyan Avenue, and 246 people were physically injured, pursued, and detained.

One year later, it has become clear that the disproportionate actions of police and other plainclothes officers have not yet been resolved.

The Committee to Protect Freedom of Expression sent a query to the Special Investigation Committee to find out about the status of the corresponding criminal case. The reply it received stated that the case has been extended till August 17, 2016. During the preliminary investigation, 25 media representatives were questioned, 21 of whom have been recognized as injured parties in the case.

“But ironically, there is no accused or suspects in the case to date. And this, when the internet is flooded with videos that clearly show the perpetrators of the atrocities. All this testifies to pursuing the criminal case as a [mere] formality and the intention to cover it up,” reads the statement, in part.

The journalism community demands to demonstrate an unbiased and follow-through attitude to the criminal proceedings and hold all the guilty accountable — regardless of the positions they occupy.

The struggle for journalists’ rights usually expires or weakens when no visible results (court precedents) appear. And this struggle often may take years and steal time and energy from journalists. In the opinion of Committee to Protect Freedom of Expression President Ashot Meliqyan, the only way out is to be armed with patience, be determined, and be ready to take the struggle till the end.

And the more this is kept a hot topic on the media’s agenda, the more the possibility to achieve results will increase. We know that two journalists have applied to the European Court of Human Rights and one journalist, to the UN International Court of Justice.