Average Journalist in Armenia is 25-Year-Old Woman: A Collective Portrait 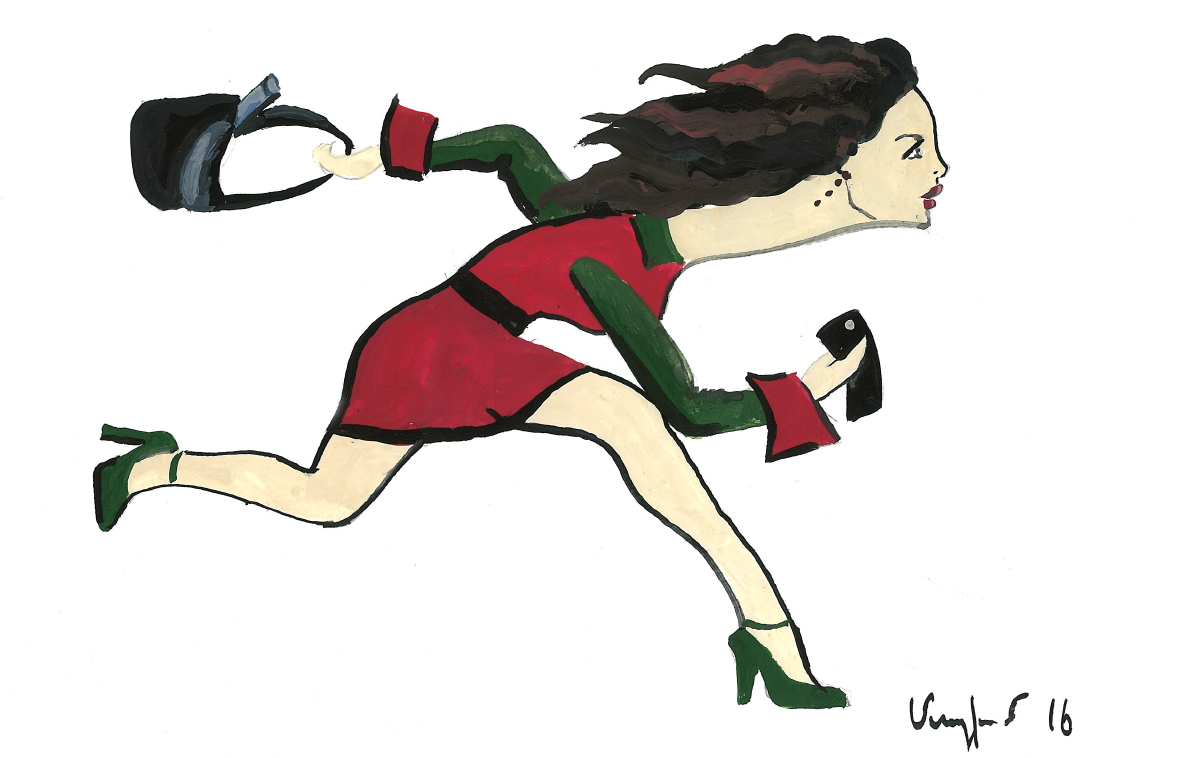 Illustrator Mariam Mughdusyan painted this portrait based on the descriptions of 11 intellectuals of the older generation.

In order to complete the image of the average journalist in Armenia, Media.am from December to March asked several well-known local intellectuals to describe the external and internal features that characterize the majority of Armenian journalists today. The majority of the conversations were conducted in interview format, a minority through Facebook, and one over the phone.

I imagine a boy under 30, but it turns out that journalism is girls’ work in Armenia. Though there are good not-that-young male journalists, but women more so set the way in journalism. The color of the eyes… What do I know? What’s important is that they be intelligent.

Let those who are the best not be offended because I know they exist. But the collective character is as follows: not knowing the customs of Armenian journalism, not picturing journalism’s purpose, fulfilling orders. The problems of Armenian history, Armenian culture, and Armenian literature are mainly at a great distance. Likes to repeat memorized passages from numerous books published 50–60 years ago.

I picture a woman because nature has given woman a big heart, tenderness, which we men don’t have. Yes, she’s a woman, definitely a woman, but unfortunately, here too we have a problem because the eternal beautiful features of femininity are absent. Her sex is female, but her behavior is not feminine.

In terms of being well-read, a few years ago the situation was worse; now, in my impression, it seems they’re already read.

I would like their level of education to be higher. In terms of character, in one word? … Journalist, that already tells you everything.

A 25–45 year-old woman. Her eyes, dark, probably chestnut brown; her hair, down to her shoulders; in her gaze, interest in the topic, sometimes also intellect.

All the journalists have higher education, but very few have a good understanding of the actual topic they’re writing about. There are many who more or less don’t put into writing the words you said in the interview. They don’t even condense it; if you’ve repeated something in order to explain it better, they don’t remove the repetition.

Very young: a 22, 23, or 24 year-old girl. Hair, probably medium length, until her shoulders. Eye color, I don’t know, but it seems to me, with lots of make-up. For some reason that’s how I pictured it. Naturally, with an iPad, laptop, or with some other phenomenal I-don’t-know-what.

There is adornment, but in moderation. Earrings? I don’t notice such things. I’m quite indifferent in that regard.

I’m saying something unfortunate, but it seems to me, [the average journalist] is uneducated: she knows neither history nor the present. I say this with regret.There’s no analysis in her, in my opinion.

Well-mannered? I find it hard to say. Probably yes.

Of the collective image, there are two types: one part, terribly modest; the other part, shameless to the point of impudence. The average journalist in Armenia I imagine is either the first or the second: a mix of these doesn’t exist in one person.

A 20–22 year old girl. Stupid, uneducated. Definitely with high heels. I haven’t paid attention to the make-up, I can’t clearly say, but she’s dim-witted, that’s for sure.

Pretentious but not in intellectual appearance, unaware of the methods of inductive and deductive reasoning, lacking awareness of public interest, one who prefers her own ego, to whom you can read the Gospel, but she will say, hurry, the car has left, my time to submit the story is up.

One who has little knowledge of geography, the history of political currents, economics, the mother tongue… it came out a little sad, but the average is this, according to me.

The collective character’s age will be quite low: about 25 years old. They start from 15–17 years old.

The majority of journalists are women, unfortunately.

The collective journalist’s eyes, hazel; her hair, in varied and diverse colors.

I believe many of the youth, nor those over 50, should be journalists. These are two extremes. One is tumultuous and still immature or partly mature; the other, a little exhausted. Therefore, particularly between 30 and 45 is the best age to practice journalism.

Prevailing are female journalists aged 20–35. The youth mainly because of a lack of experience are not knowledgeable, but [their] courage, vigor, and trials mitigate the impression.

Their attire is fashionable; their hairstyle, everything in its place. My impression: many are blonde (predominantly, artificial). Because of the abundant use of black eye shadow, dark eye color seems to dominate.

[Providing a] physical description is a little difficult for me because the journalists I know are very different from one another.

Ok, to generalize: eyes, not black; she is not blonde. Hair is not that curly. Is not very noticeable, doesn’t try to be very vivid or striking.

No bright clothing or high heels. Perhaps there are elite journalists, who deal with the elite. But we don’t know those places, we don’t come across them for me to describe their dress code.

Those I’ve met are common people: ordinary, everyday, with existential problems, trying to survive. They have some education. But they also don’t have the option of constantly working to educate themselves, to grow.

Since our educational complex’s website is my favorite media outlet, it comes to erase every age: every third, fourth, or 11th grade student is a blogger, a journalist. Ages are erased…

Even if we digress from this, the journalist’s average age has become significantly younger, it seems to me. She is twenty-something, not more. And everywhere are girls: my nation itself is a female nation. But girls are not the most capable.

I like our girls a lot, but, forgive me, for example, I renounced press clubs because I felt myself eliminated. On one hand, I see how many interesting women and girls there are, attractive, interesting, but at the TV stations, you interact with these same people up close — nothing good.

There’s a lack of wickedness, teeth, a lack of force, with which she can sting me. I’ve never resented a journalist for this. She has no tooth. That’s not good.