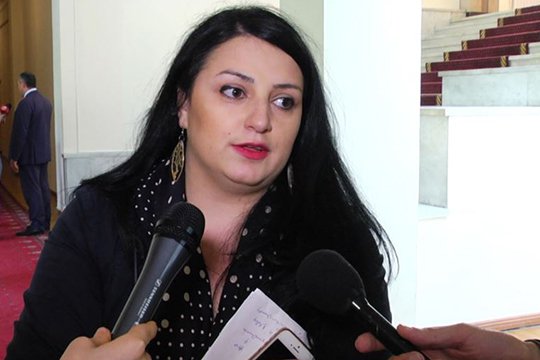 “Please obligate Republic of Armenia Police Chief Vladimir Sergei Gasparyan to publicly apologize for insulting me,” journalist Siranush Papyan made this request, as compensation for damage caused to her honor and dignity, in her application to the court.

Papyan, a journalist with 1in.am and Lragir.am, submitted her lawsuit against Gasparyan on April 29 to the Court of General Jurisdiction of Kentron and Nork-Marash Administrative Districts of Yerevan.

At a briefing with journalists at Tsitsernakaberd Genocide Memorial on April 24, to Papyan’s remark on the police reforms, Gasparyan responded, “And I, forgive me, don’t see a woman in you.”

This is one of the few instances in Armenia where it’s not an official who is launching a defamation lawsuit against a journalist or media outlet but the opposite.

Papyan also took the same case on April 28 to the Commission on Ethics of High-Ranking Officials, to subject Gasparyan to disciplinary action according to the relevant provisions of the Law on Public Service.

According to this law, an official in particular must demonstrate a respectable attitude towards all those with whom he communicates while performing his duties.

1in.am chief editor Arman Babajanyan informed Media.am that in the near future they will also appeal to the court for an incident related to reporting the April 22 demonstration on Yerevan’s Baghramyan Avenue, and they will call police officers to account for obstructing the work and damaging the devices of 1in.am journalists.